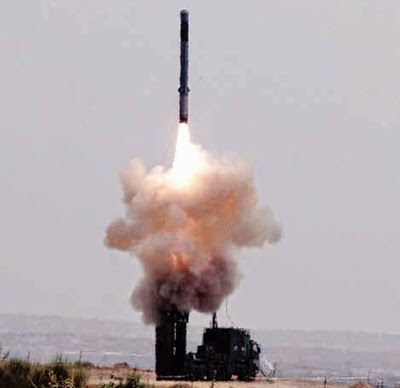 The Indian Army successfully test fired the advanced version of BRAHMOS supersonic cruise missile from Car Nicobar Island to operationalise another regiment of the weapon system, on 09 Apr 15. The Block III variant of BrahMos with steep dive capability was launched by the Army unit from a Mobile Autonomous Launcher at about 1100 hours today. The missile followed a predetermined trajectory and successfully hit the designated target on Trak Island at an extended range.

Developed by BrahMos Aerospace as a joint venture between DRDO and NPO Mashinostroeyenia of Russia, the 8.4 meter long missile can fly at 2.8 times the speed of sound and is capable of carrying conventional warheads of upto 300 kgs for a range of 290 km. Featuring a very low radar signature, it can be launched from land, ship, submarines and air platforms. BrahMos Aerospace is currently working to develop the submarine launched, air launched and hyper-sonic version of the missile.