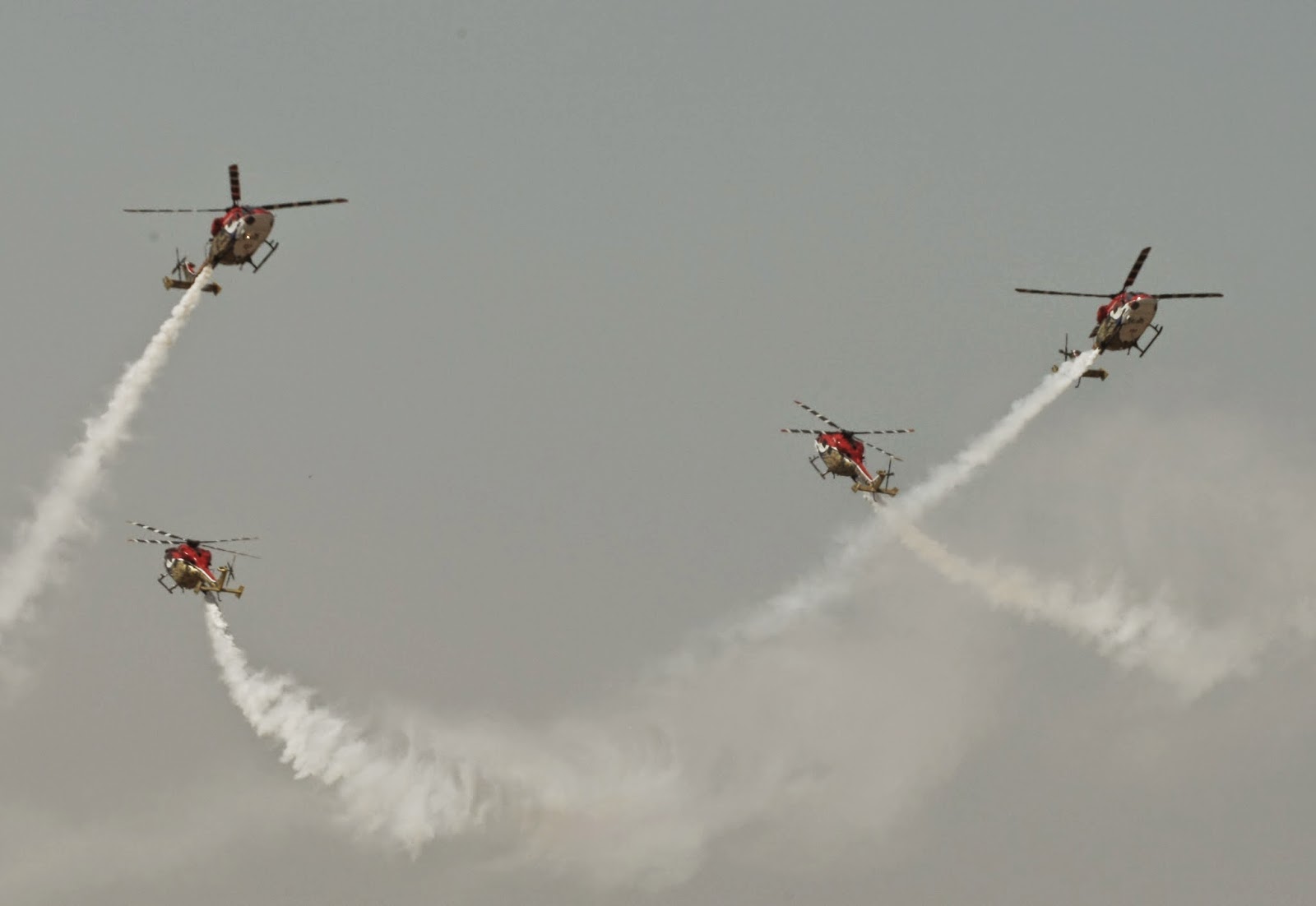 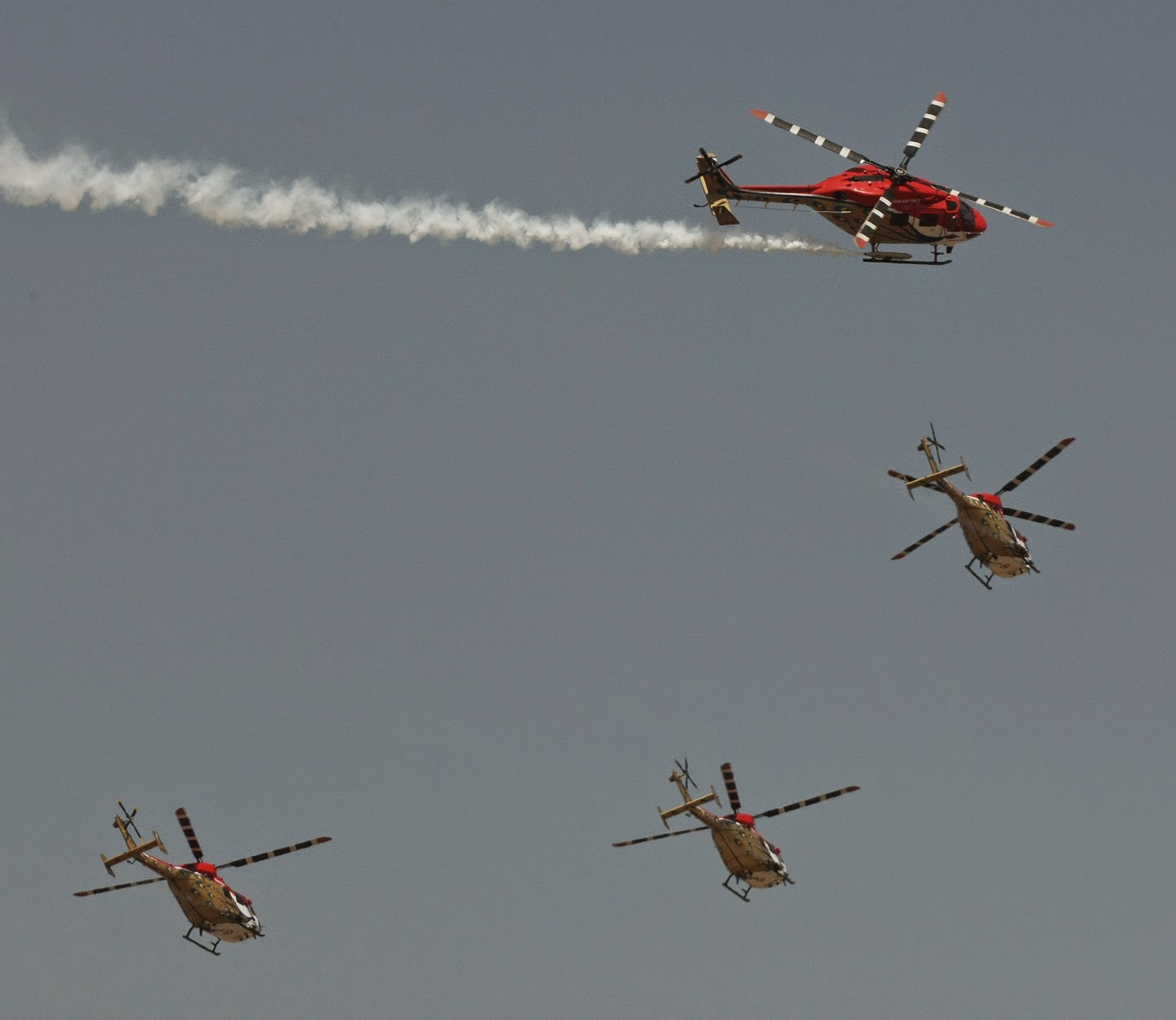 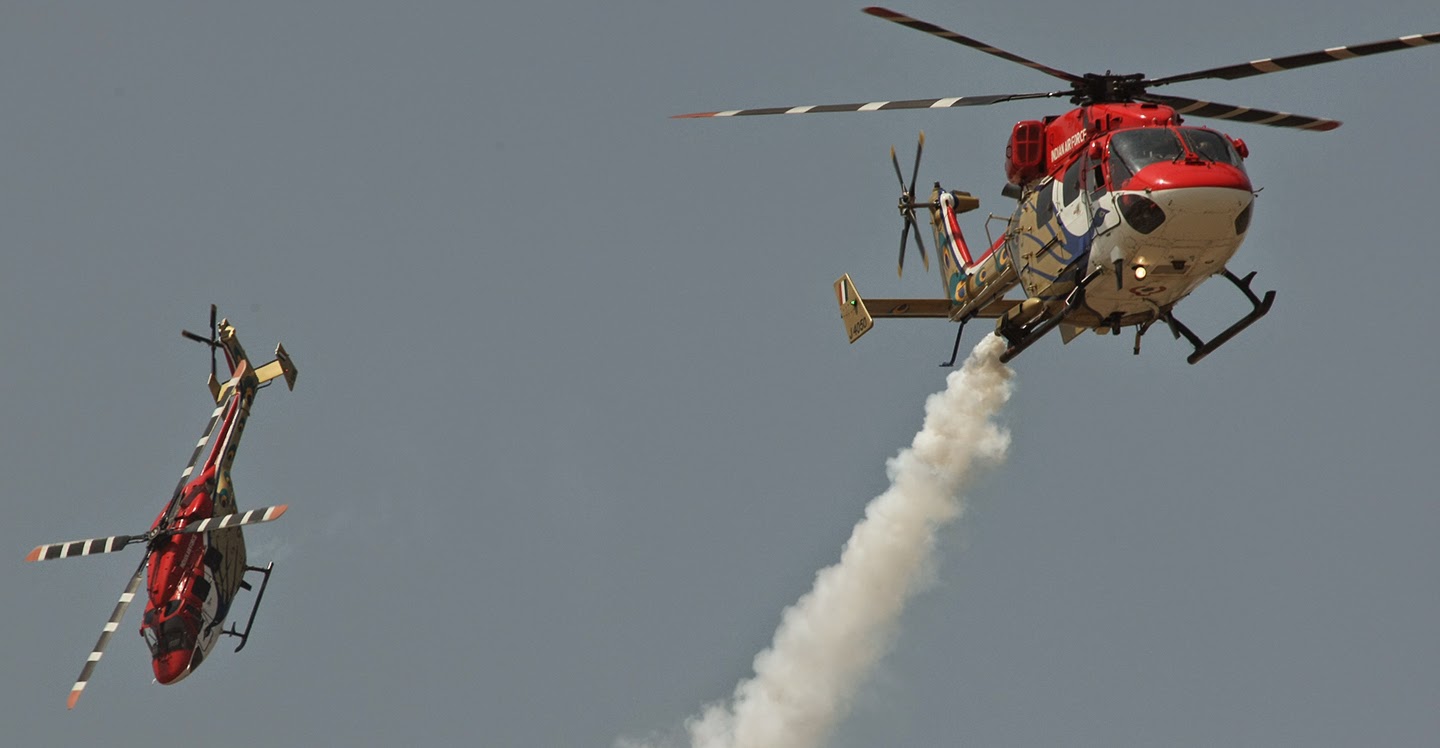 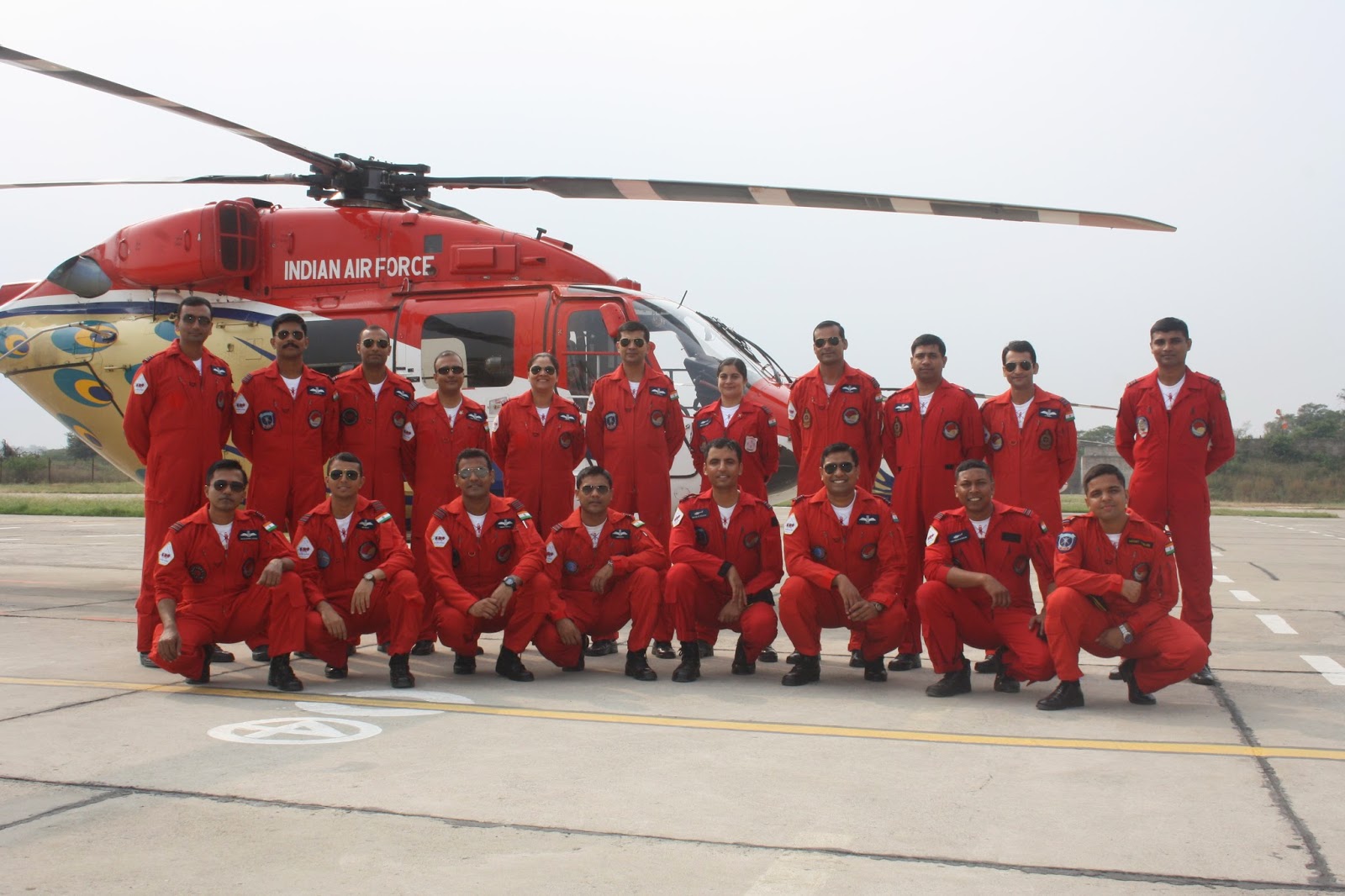 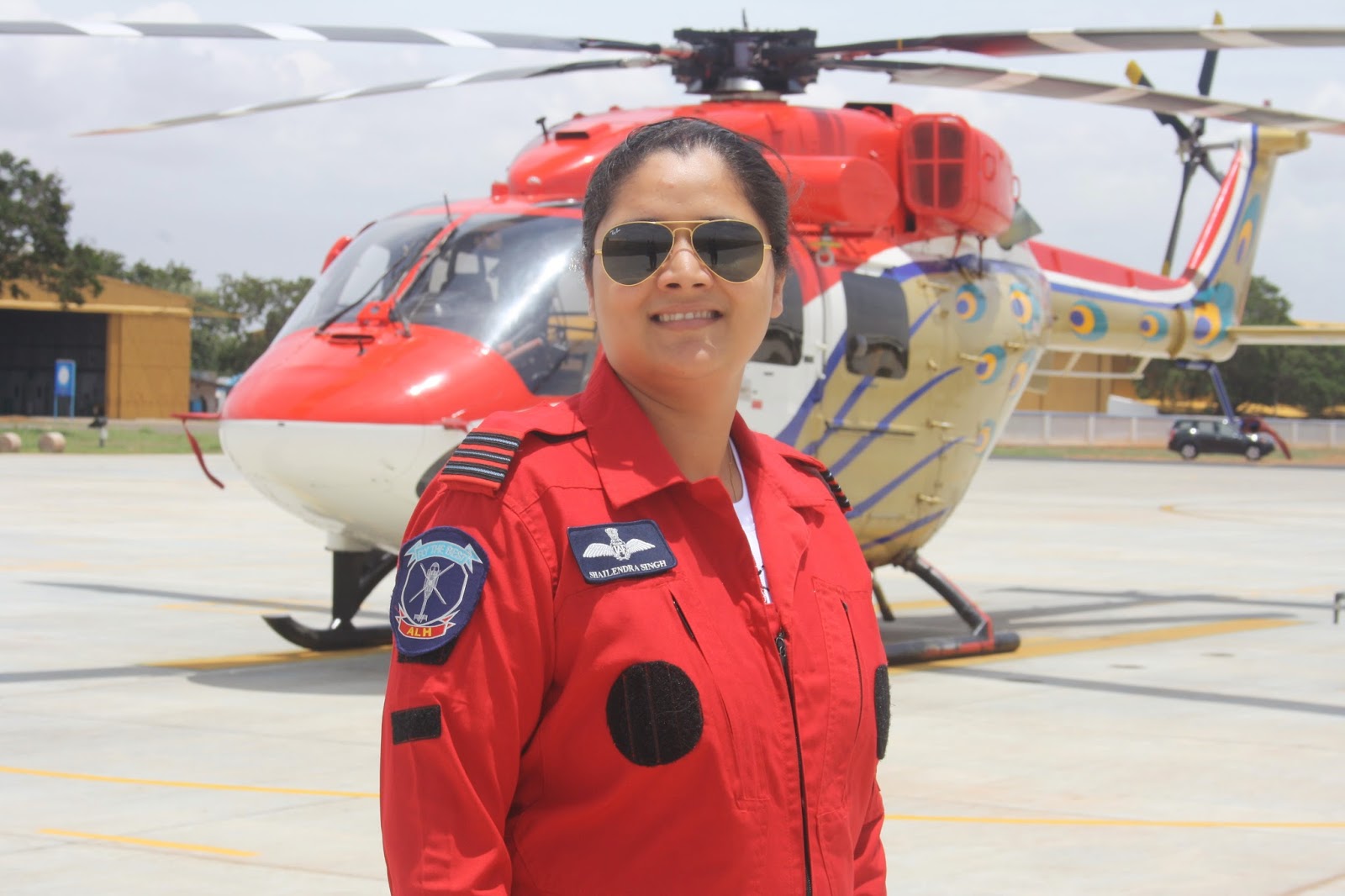 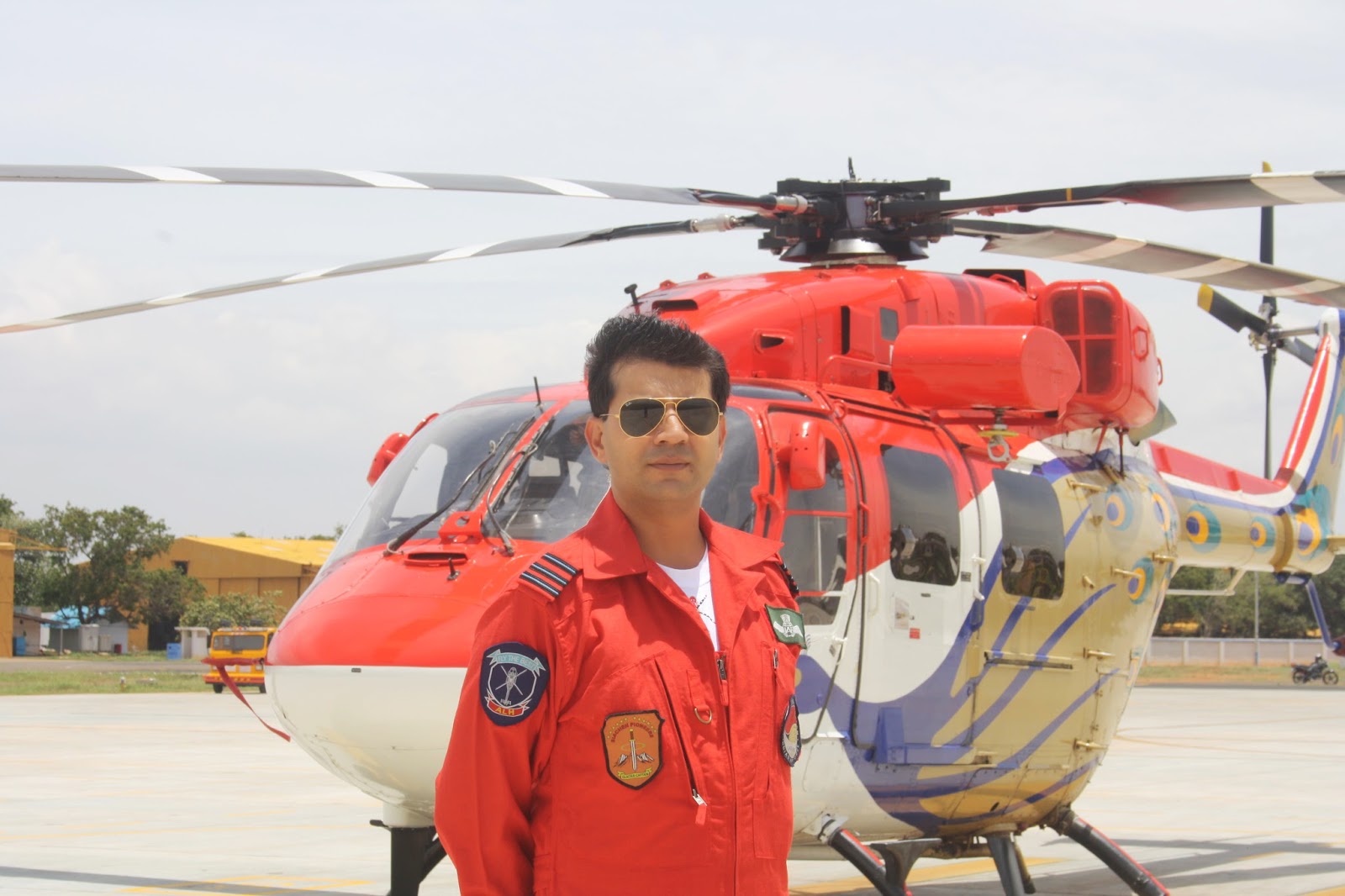 Air shows are essentially about business meetings and exhibits of military hardware and merchandise. But over the years the reputation of Aero India, now into its tenth edition has also been assiduously built by magnificent displays – static and aerial – by both civil and military aircraft, including participation by famed aerobatic teams from around the world enthralling audiences.

Aero India 2015 is also being much talked about and anticipated as world-acclaimed aerobatics teams – Breitling Wingwalkers (US), Scandinavian Air Show, Flying Bulls from Czech Republic, Yakovlevs formation display team from UK – are set to captivate the young and old onlookers alike.

While all aerobatic display teams are enthralling to watch the widest and loudest applause is usually reserved for our very own Indian aerobatics team ‘Sarang’ flown by young IAF helicopter pilots who are usually the show-stoppers whenever they take to the sky.

The IAF Sarang Helicopter Display Team has the unique distinction of being one of only two helicopter display teams in the world, the other being ‘Blue Eagles’ of the British Army.

The leitmotif ‘Sarang’ is derived from Sanskrit for ‘peacock’. The helicopters have been painted in bright colours with the peacock form superimposed on them.  It is today a widely and easily recognised artwork on these indigenously built helicopters.

“It attempts to symbolise the beauty and grace of the peacock during the display,” explains Sarang Team Leader, Wing Commander AS Abhyankar. A qualified flying instructor and now Commanding Officer of the outfit, the return to Aero India for Wg Cdr Abhyankar and a few others is a déjà vu moment. Abhyankar first flew in the 2003 Aero India edition as a young Flight Lieutenant.

The Sarang team first debuted at the Asian Aerospace Air show at Singapore in Feb 2004. Since then, the team has performed in over 35 air shows in India and abroad. Their scintillating performance at Al Ain Aerobatic Show, UAE, in Jan 2005, earned them a reputation as one of the best display teams in the world.

In Berlin air show of May 2008, the team was adjudged as the ‘best looking close formation team’. The team made history after five of its helicopters ferried across the English Channel from Germany to the United Kingdom.

“We are compelled to give bang for the buck,” says Wing Commander Mudit Chaurasia, a sub-section leader in the formation who flies as ‘Sarang-2’. Mudit has also flown in three previous editions of Aero India. “We have done shows all over the world but we get the maximum appreciation here,” he enthusiastically adds.

The ‘Sarang’ team continuously strives to modify and perform new profiles for each display. While it is natural to expect daring and precise formation displays by fixed wing aircraft it is difficult for helicopters to perform similar manoeuvres owing to the inherent instability and large and unwieldy rotors, explains Sarang-2 leader Mudit. “This is what makes them so special and unique,” he adds.

Having flown in several major air shows worldwide including at RIAT (Royal International Air Tattoo), Fairford, UK among others, Wg Cdr Chaurasia singles out his recent air show in November last over Passighat in Arunachal Pradesh as memorable. It is mostly in valleys of the northeast or J&K where most IAF helicopters earn their spurs early in their flying career.

What audiences will see at Aero India 2015?

The Sarang profile will begin with entry in an inverted wine glass formation. This will be followed by various close formations in ‘Line Astern’ and ‘Diamond’ formation to facilitate a closer look at the helicopters for the audience.

Three helicopters then group together to perform the star manoeuvre which is unique to helicopter flying – the ‘stall turn’ known as the ‘Dolphin’s Leap’. The team then continually keeps the audience glued to the skies with their breath-taking manoeuvres.

The team then regroups for its final signature manoeuvre ‘The Sarang Split’ involving the four helicopters criss-crossing each other vertically and horizontally to form a knot.

Squadron Leader Deepika Misra is the first and the only woman pilot in the team and has the onerous responsibility as the Team Safety Officer. Two pilots always remain on standby with the fifth helicopter in case of any eventuality while a quartet is flying.

The flying machines are kept airworthy at all times by a team led by Wing Commander Tarundeep Puri, Senior Engineering officer. Others in the team include Squadron Leaders Sourabh Kakkar and Joydeep, Flight Lieutenants Bharat Bajaj, Chandan Kumar, Sandeep Tewatia besides others.

Wing Commander Bhavana Mehra the team administrator also does the commentary for the displays. She has the distinguished privilege of being the commentator for not only the Sarang team but also with the erstwhile Suryakiran Aerobatic Team.