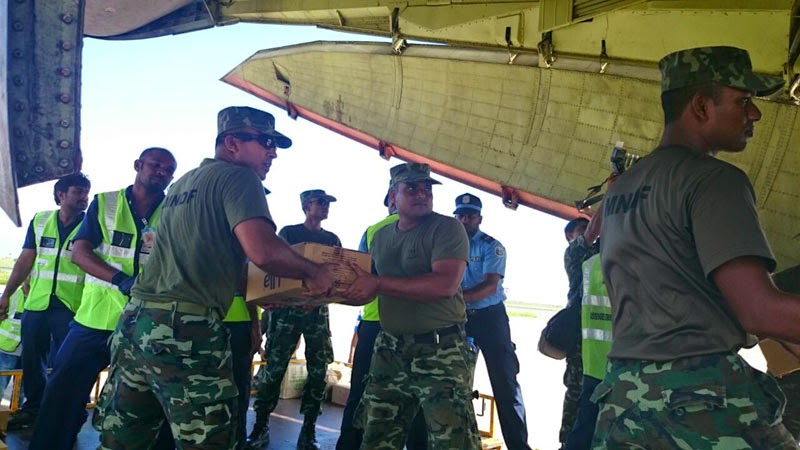 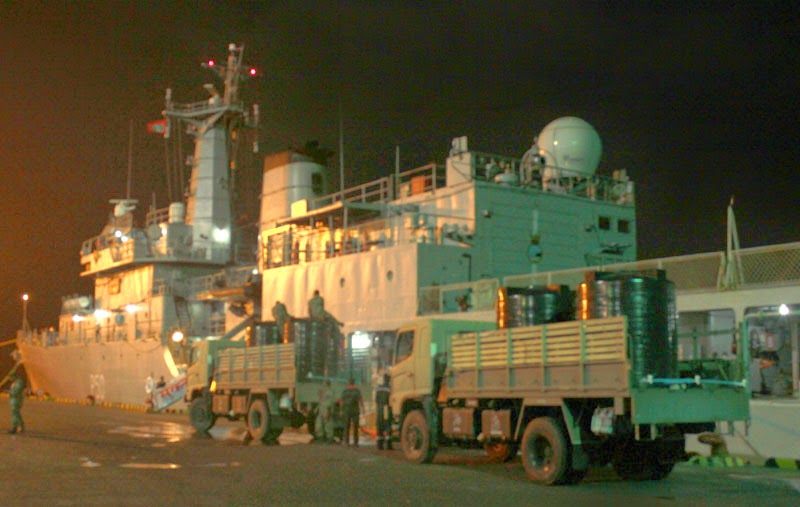 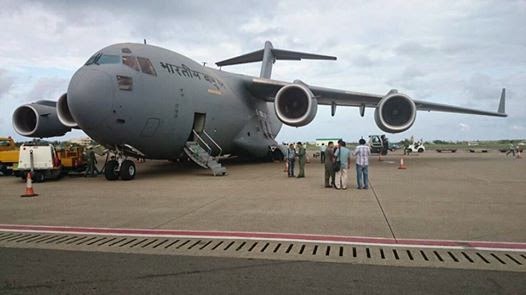 In a swift response to the ‘National Crisis’ faced by the Maldives, following the shutting down the desalination plants in a fire incident in capital in Male’, the Indian Air Force had pressed fixed wing aircraft into service, carrying a consignment of potable water to meet the immediate requirement of the people in Male’.

Maldives, an island nation in the Indian Ocean, has no natural water source and consumes only treated sea water.

Indian Navy the First to Respond in Maldivian Crisis

The island nation of Maldives is facing a national contingency that occurred due to fire on 04 Dec 14 in its desalination plant. This plant produces drinking water for Male. Responding to Maldives’ urgent request for assistance, INS Sukanya, on patrol off Kochi, was diverted pronto to arrive Male PM 05 Dec 14. The ship carried 35 tonne of fresh water and has the capability to produce 20 tonnes of water every day. The ship has already transferred approximately 65 tons of fresh water till this evening.

Additionally INS Deepak, a large fleet tanker with 900 tonnes of water was also sailed from Mumbai and has reached Male this evening (07 Dec 14). Indian Navy warships have the capability to produce drinking water using their desalination plants (INS Deepak is capable of producing 100 Tons water every day).. The IN ships will continue to produce and supply potable water to Male even whilst at anchor. The responsiveness, unique capabilities, flexibility and versatility of warships in meeting various contingencies has yet again been demonstrated.

The Indian Navy has always been amongst the first responders to crises in Maldives. The first instance was in 1988 after mercenaries attempted a coup against the elected government. INS Godavari and INS Betwa responded to Maldives’ request and rescued abducted people from the fleeing mercenaries. This earned the lasting goodwill of the Maldivian Government and its people. IN was also the first to respond after Maldives was struck by a Tsunami in Dec 2004. IN Ships Mysore, Aditya and Udaygiri, along with their integral helicopters undertook prolonged and extensive operations to provide immediate succour to many islands in Maldives. In these efforts the Indian Navy established a Maritime Coordination Centre at Male for coordinating relief activities and assisted in distribution of relief supplies, restoration of power and provision of safe drinking-water. Medical aid was provided in the form of mobile medical camps and serious cases were evacuated by ship’s helicopters to Male.

In addition to responding to crises, the Indian Navy is actively cooperating with Maldives in meeting their maritime security requirements. These endeavours span provision of warships, training, assistance in surveillance of their maritime domain, medical cover, Search and Rescue operations, as well as exchange of white shipping information.

The Indian Navy has been to the forefront in supporting Maldives whether in disaster relief, responding to various contingencies or in meeting their maritime security needs. This sustained engagement has positioned India and the Indian Navy as ‘the first port of call’ and a ‘dependable partner’ to our close maritime neighbour Maldives.