Book Release By IAF Chief On Tenth Anniversary Of Tsunami 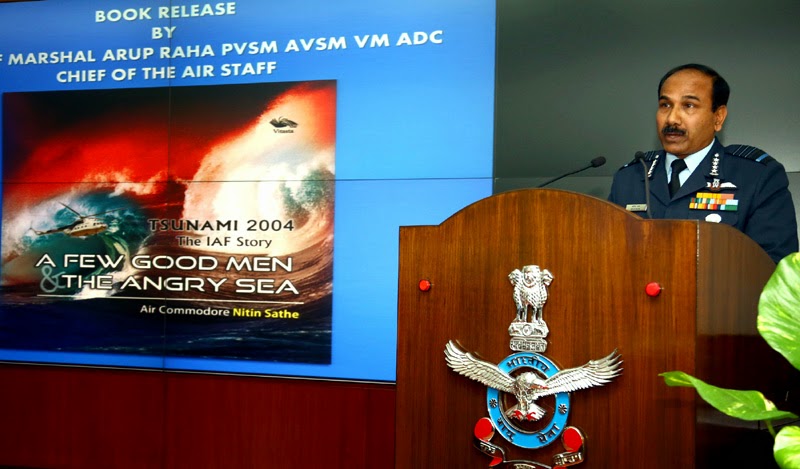 The Chief of the Air Staff, Air Chief Marshal Arup Raha addressing at the release of a book titled ‘A Few Good Men and the Angry Sea’ written by Air Commodore Nitin Sathe, in New Delhi on December 26, 2014.

In a book release function organized at the Air Headquarters today on the tenth anniversary of the infamous tsunami of 2004, the Chief of the Air Staff, Air Chief Marshal Arup Raha released ‘A Few Good Men and the Angry Sea’ – a book penned by Air Commodore Nitin Sathe. The book is a recollection of memoirs of the author who, as a Wing Commander, was posted to Air Force Station Carnicobar following the tsunami. Amongst other dignitaries who attended the function was Air Cmde BS Krishna Kumar, who, as a Wing Commander had been posted in as Commanding Officer of a helicopter unit at Carnicobar, just about seven weeks prior to the horrific event.

When the earthquake struck, little did people of Carnicobar realize that they would soon be facing the wrath of the seas. People ran out of their houses in their night suits and those were the clothes that many were finally left with- rest of their belongings having been consumed by the sea. Dressed only in his pyjamas and vest, then Wing Commander BS Krishna Kumar took off in his helicopter and rescued about 300 people on 26 Dec 2004. Air Cmde BS Krishna Kumar quoted from the diary of a survivor: “The wail of the grieved ones was strong enough to rip apart the strongest of hearts while the joy of people reuniting with their families was also beyond imagination. The ones who wept did not do so for (loss of) their homes or belongings and the ones who rejoiced did so inspite of it.”

Following the tsunami, Indian Air Force posted 11 officers and a bunch of dedicated men, including Wg Cdr N Sathe who had volunteered to go there, to take charge of bringing up the operational fitness of the Air Force base within 100 days. In his book the author has provided detailed accounts of heroism and leadership on the part of men of his own team as well as ones that arrived later on and how all teams worked together towards the deadline of 100 days to make Carnic operational.

Speaking at the function, the Air Chief lauded the efforts of the transport and helicopter fleets employed in the rescue and relief operations at Carnic. He said that the Air Force has contingency plans in place to deal with any such situation/ calamity in the future. He said,”Rest assured any time such a contingency comes up the Indian Air Force will always look after its people and also the people of the Nation. We are a very specialized service and very proud as professionals to say that we are exclusive by our profession but are totally inclusive in serving the Nation.”