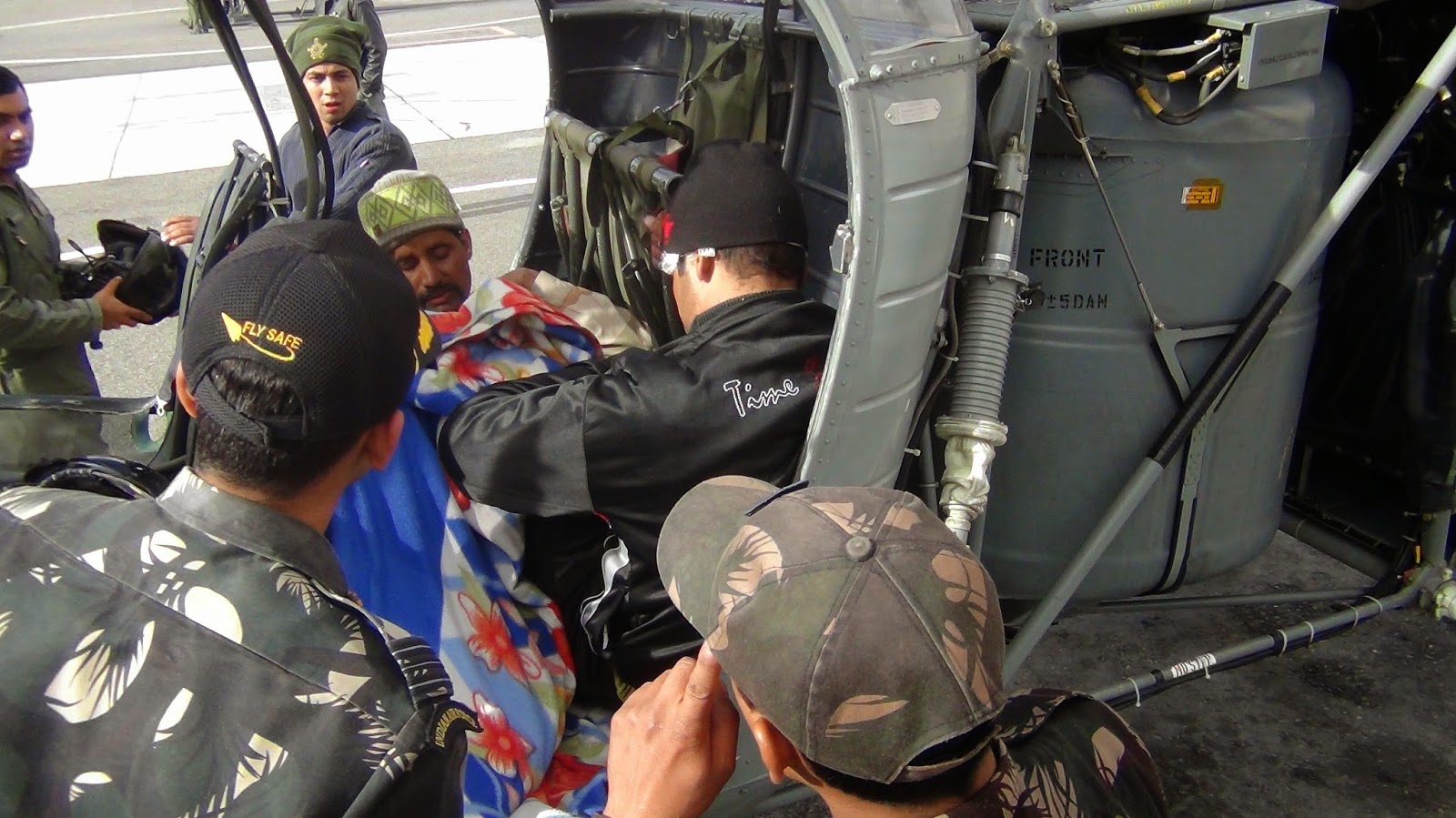 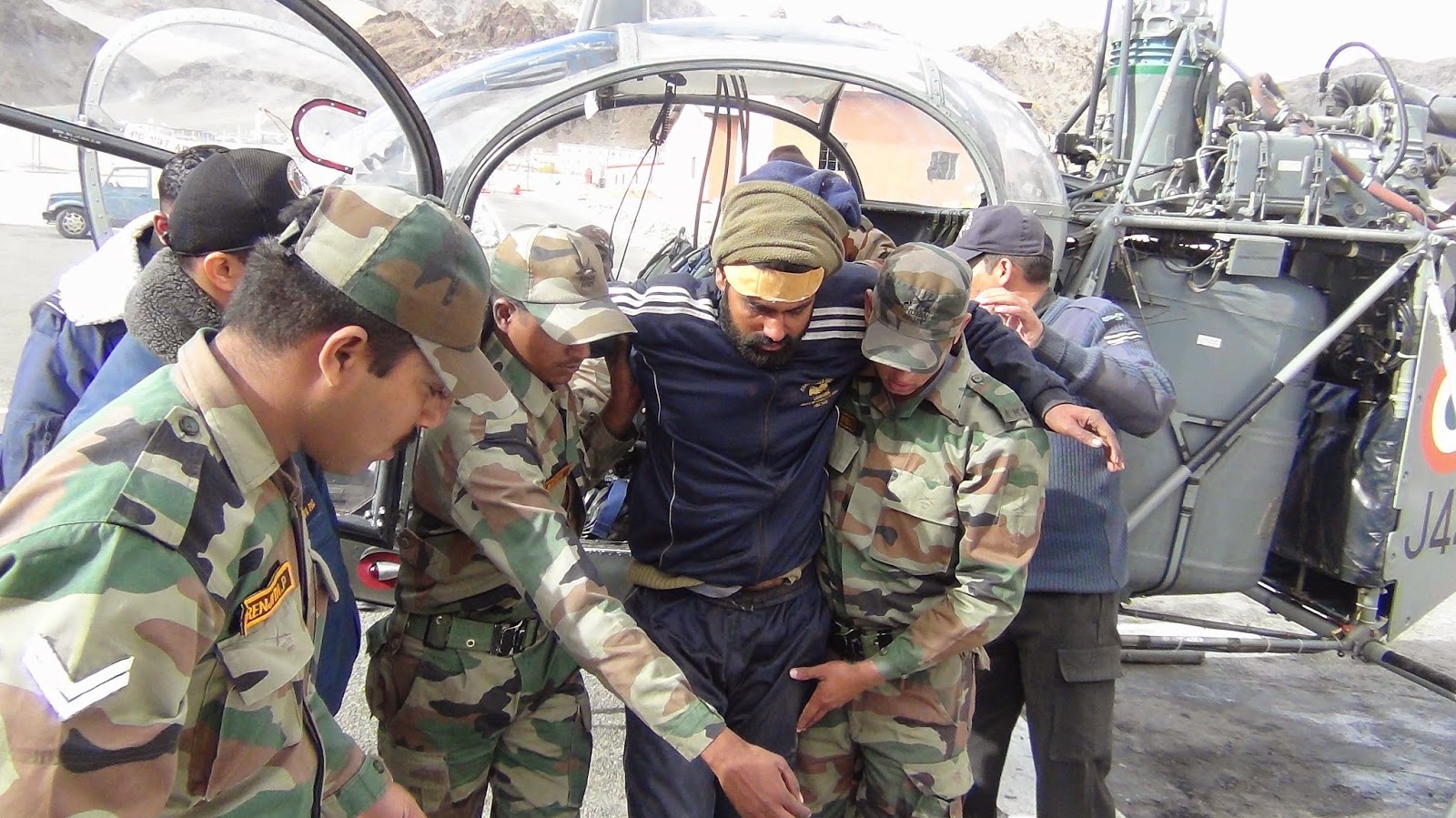 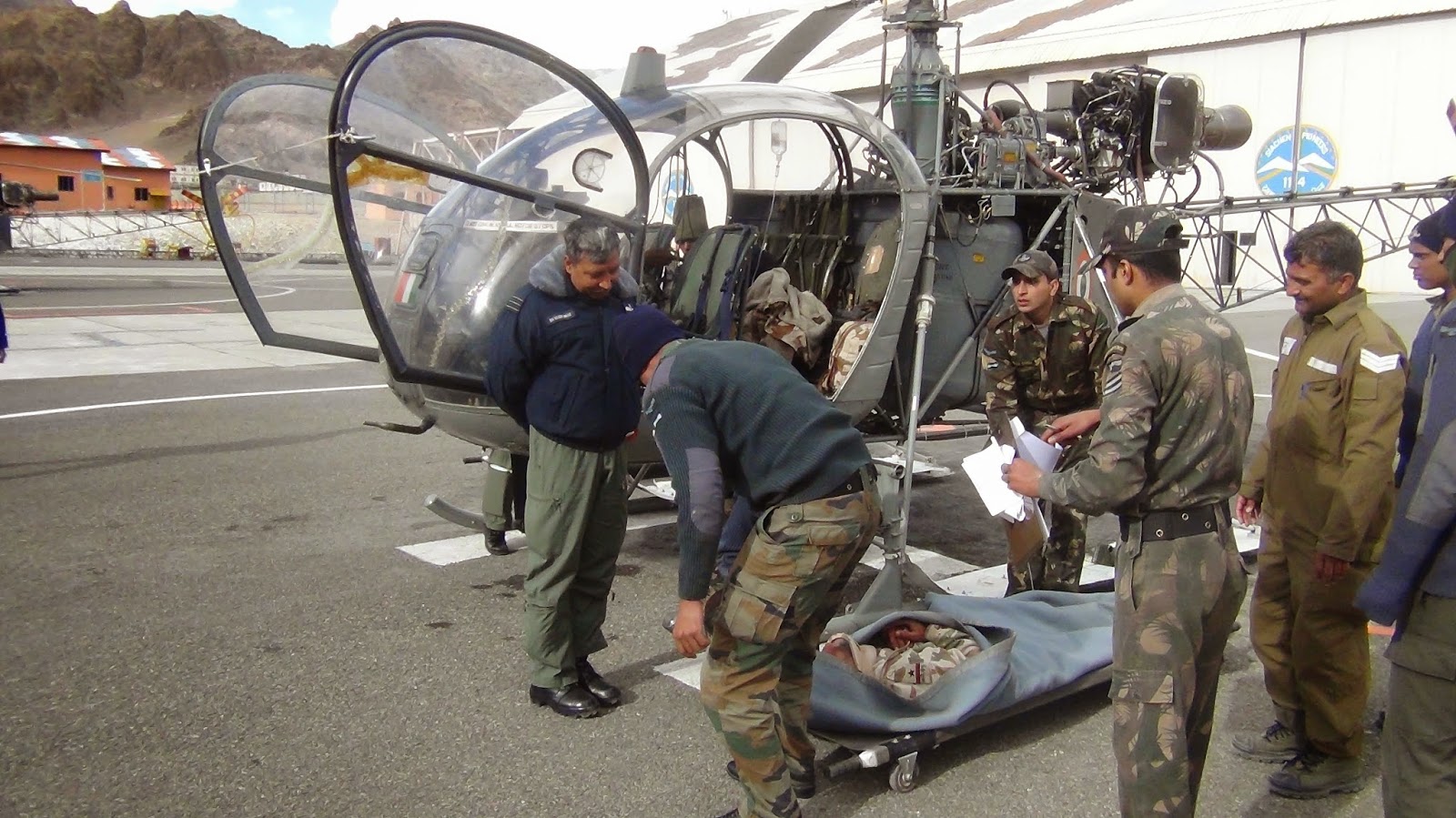 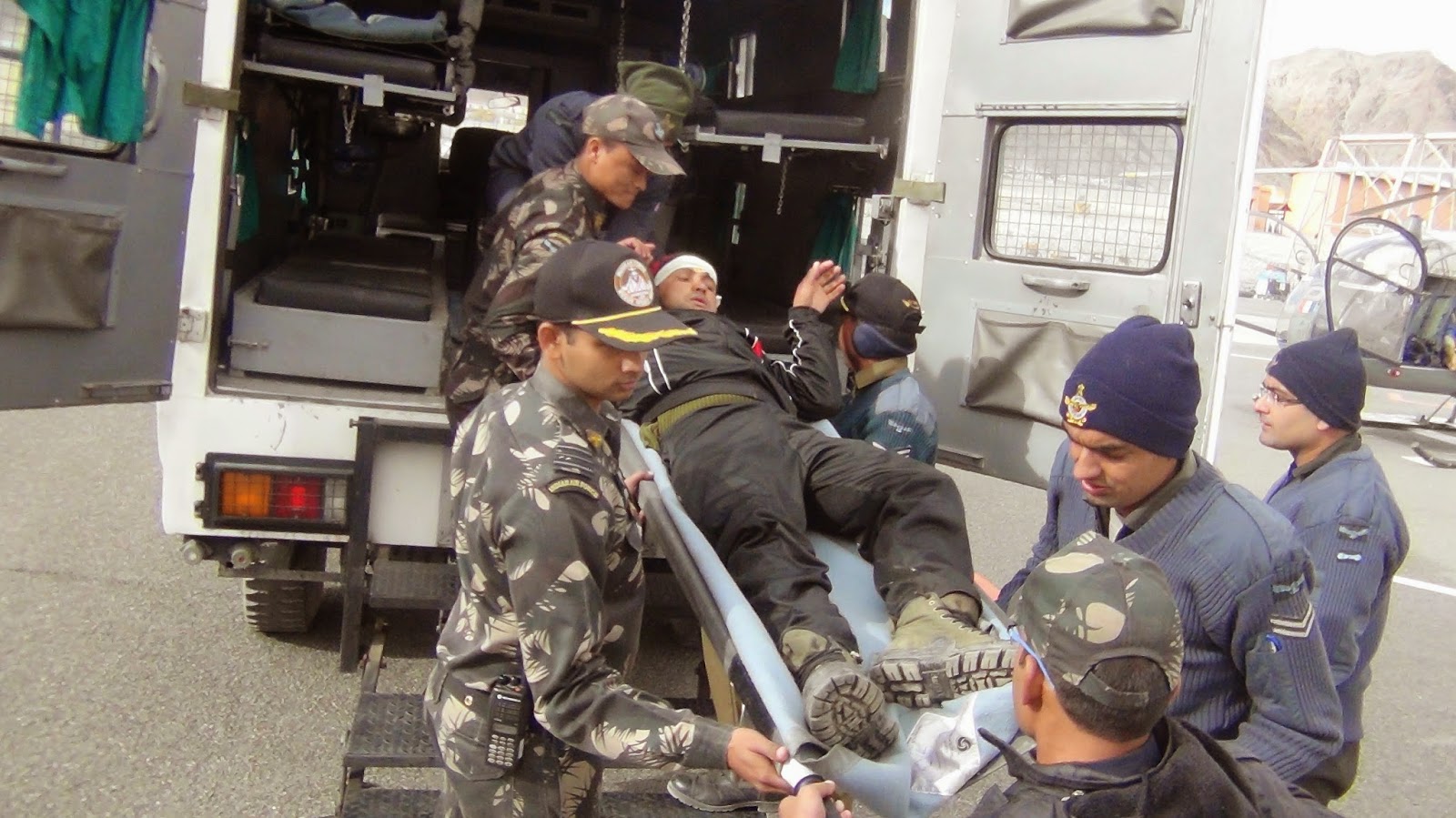 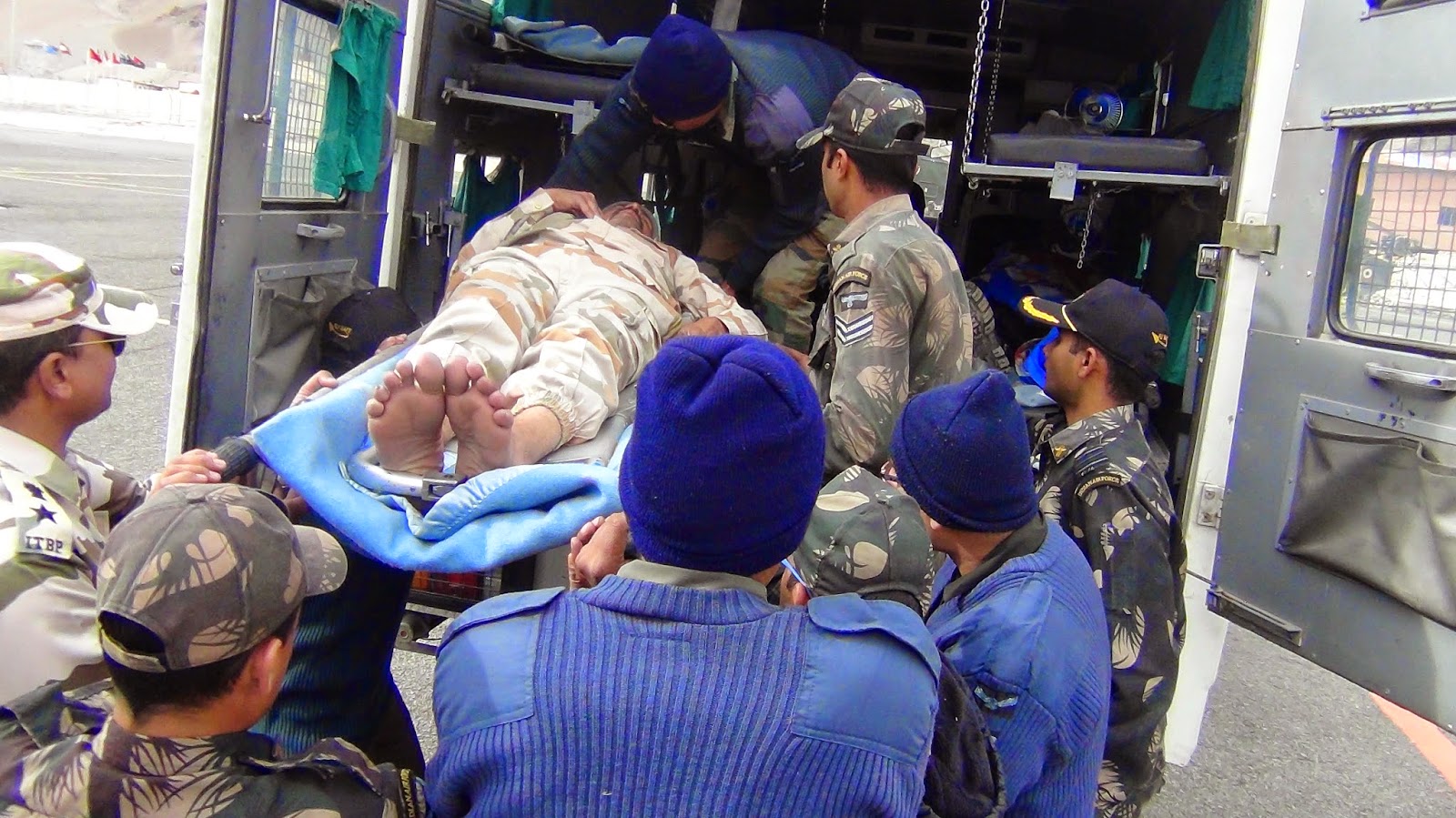 On 16 October 2014, an ITBP patrol vehicle with 15 soldiers, carrying out regular patrolling along the Indo-Chinese border near Hot Spring post met with a serious accident. The driver lost control due to brake failure after which the vehicle tumbled into a ravine and fell in the dry river bed. Six occupants were seriously injured, sustaining critical injuries; fractured arms, pelvis, legs, serious injuries to head and the spine and broken jaws. The casualties required immediate medical intervention and the only mode of rescue available in this unforgiving terrain and remote region is by Helicopters of the Indian Air Force at Leh; Siachen Pioneers, a premier helicopter unit of the Indian Air Force that carries out extensive operations in the entire Ladakh region especially the ‘Siachen Glacier’.

On receiving the distress call, pilots promptly obtained relevant information and planned their mission. Within minutes, three helicopters of the unit were launched in marginal weather conditions, led by Wg Cdr BS Sehrawat, the Commanding Officer of the Unit. Hot Spring and enroute valley are narrow and the treacherous terrain has vitually no forced landing fields. For a single engine helicopter it increases the risk manifold. In addition, the prevailing inclement weather in the area left the pilots with no margin for error, it called for extraordinary skill and courage to go ahead with the mission in such conditions. Keeping an eye on the fast deteriorating weather, crew went ahead with the casualty evacuation. Enroute, near Tsogtsalu helipad, 32 kilometers short of the accident spot, weather deteriorated further forcing the pilots to land and wait for 30 minutes before it improved. Moment they found a small opening in weather, the crew took off without any further delay. The accident spot was just 200 meters from the Line of Actual Control under enemy observation, fast deteriorating weather and lack of any conventional helipad, the formation landed near the accident site. They realised that all six personnel were laying casualties. The casualties were swiftly accommodated inside the helicopter and without wasting any time the formatiom set course back to Leh. On return, the pilots again encountered bad weather forcing them to land at Tangste helipad this time. The pilots ensured that the casualties were administered first aid at Tangste while waiting for weather to improve. As soon as the weather improved, the formation immediately took off for Leh. Once the helicopter landed at Leh, casualty were given a quick medical check up and then were sent to 153 GH, Leh. The formation leader Wing Commander BS Sehrawat along with other pilots; Wing Commander H Upadhyaya, Squadron Leader Selva Kumar, Squadron Leader Herojit Singh, Flight Lieutenant M Prashant and Flying Officer  A Hungund were extremely proud to have succesfully accomplished the mission.

It is noteworthy that the Siachen Pioneers have so far, till their GOLDEN JUBILEE YEAR,  saved more than 6300 lives under the most challenging flying conditions  found anywhere in the globe, upholding their Unit motto ‘WE DO DIFFICULT AS A ROUTINE, IMPOSSIBLE MAY TAKE A LITTLE LONGER’. It has a rare distiction of being the only Unit that is constantly engaged in Operations for past 30 years.