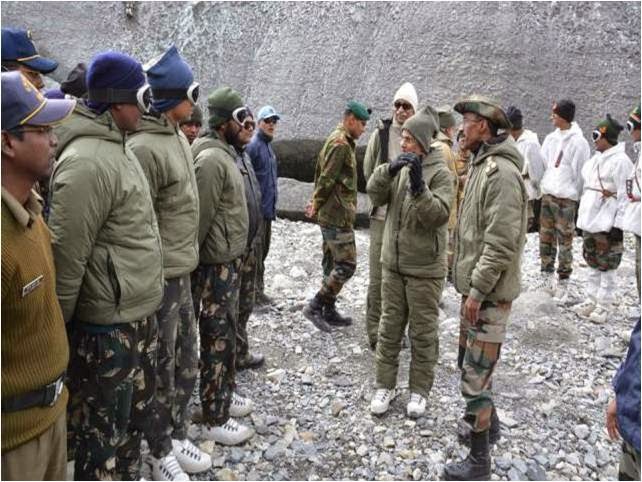 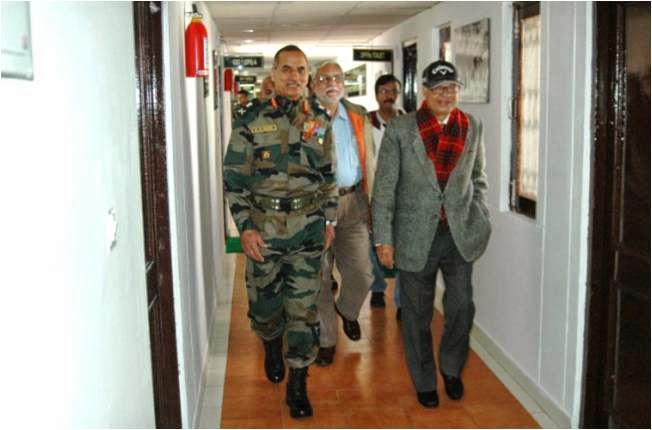 The 7th Central Pay Commission headed by Chairman Justice AK Mathur and comprising of Shri Vivek Rae, IAS (Retired), Full Time Member, Smt Meena Agarwal, IRAS, Secretary and 14 other members visited Ladakh from 12 to 15 October, 2014.
On arrival at Leh, the Pay Commission delegation visited the Headquarters of the Army Fire and Fury Corps, where they were welcomed by Lt Gen BS Negi, GOC,14 Corps.  The Pay Commission delegation was comprehensively briefed by The GOC on the peculiarities of difficult terrain, inclement weather and challenging operational conditions under which our soldiers are performing their duties in various parts of Ladakh, including the Siachen Glacier. The delegation members were also briefed at the Air Force Station in Leh.

To get a first hand feel of the hardships being faced by our soldiers, members of the Pay Commission visited the Siachen Glacier, the highest battle field in the world. At the Base Camp of the Siachen Glacier, the members spent considerable time interacting with the soldiers and experiencing the tough life led by them. They witnessed ice craft and mountaineering training being carried out at the Siachen Battle School. They also overflew the entire Siachen Glacier and landed at a forward post to familiarize themselves with the difficult conditions under which our soldiers are performing their duty. In addition to the Siachen Glacier, the Pay Commission members also visited remote posts in Eastern Ladakh and Kargil. The members also landed at Daulat Beg Oldie (DBO), the highest Landing Ground in the world, to experience the hardships being faced by our soldiers in that area. Besides the Army, the Pay Commission members also interacted with soldiers from the Air Force, ITBP,  BRO, and representatives of the DRDO.

During their visits to the forward areas, the Pay Commission members laid floral wreaths at the Siachen War Memorial, the Kargil War Memorial and the Rezangla War Memorial and paid tribute to our martyrs. Lt Gen BS Negi thanked Justice AK Mathur, Chairman of the 7th CPC and other members for taking out their valuable time for visiting the forward areas and personally experiencing the difficulties being faced by our soldiers deployed in those areas. The concern displayed by the members of the 7th CPC during the interactions has indeed boosted the morale of our soldiers.