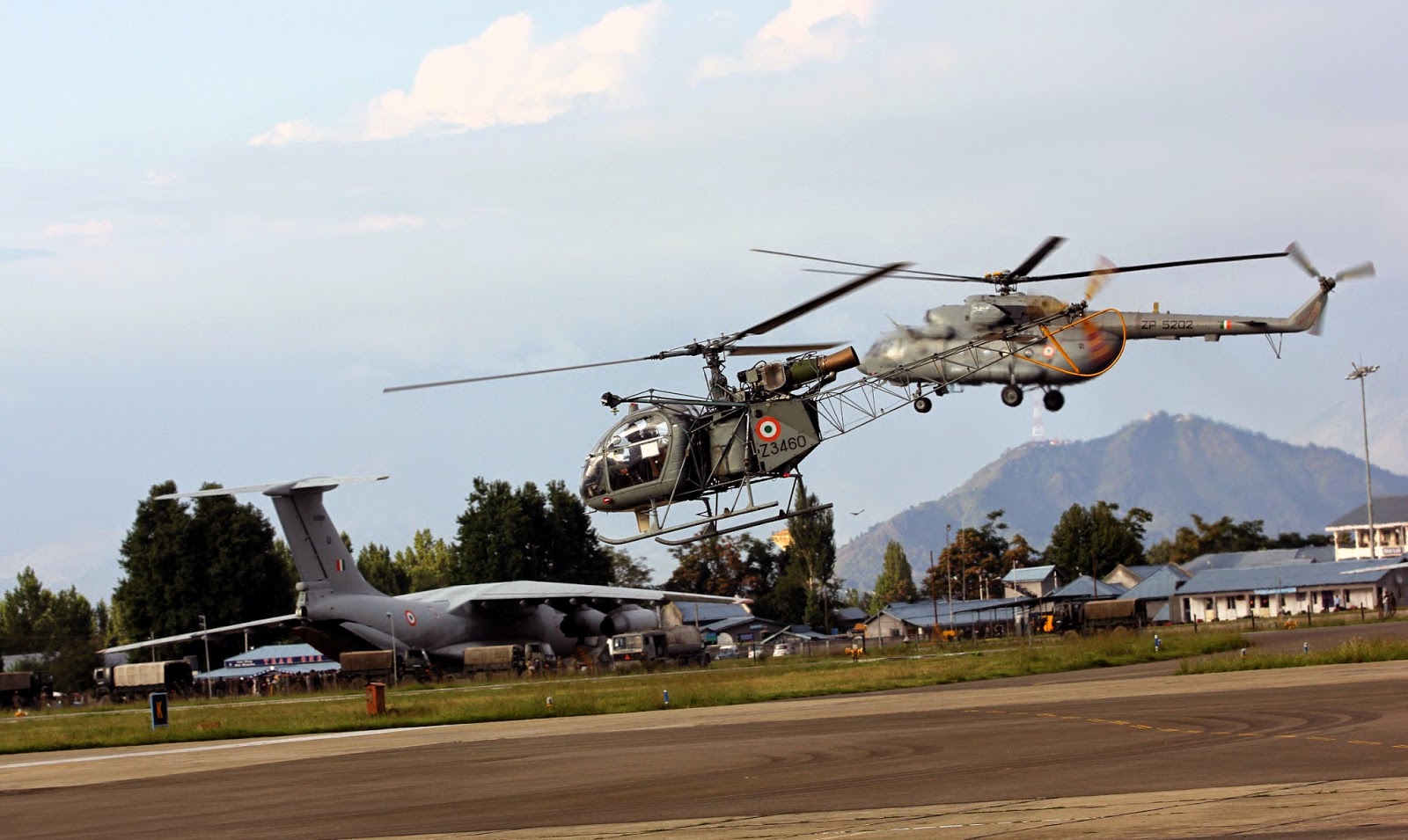 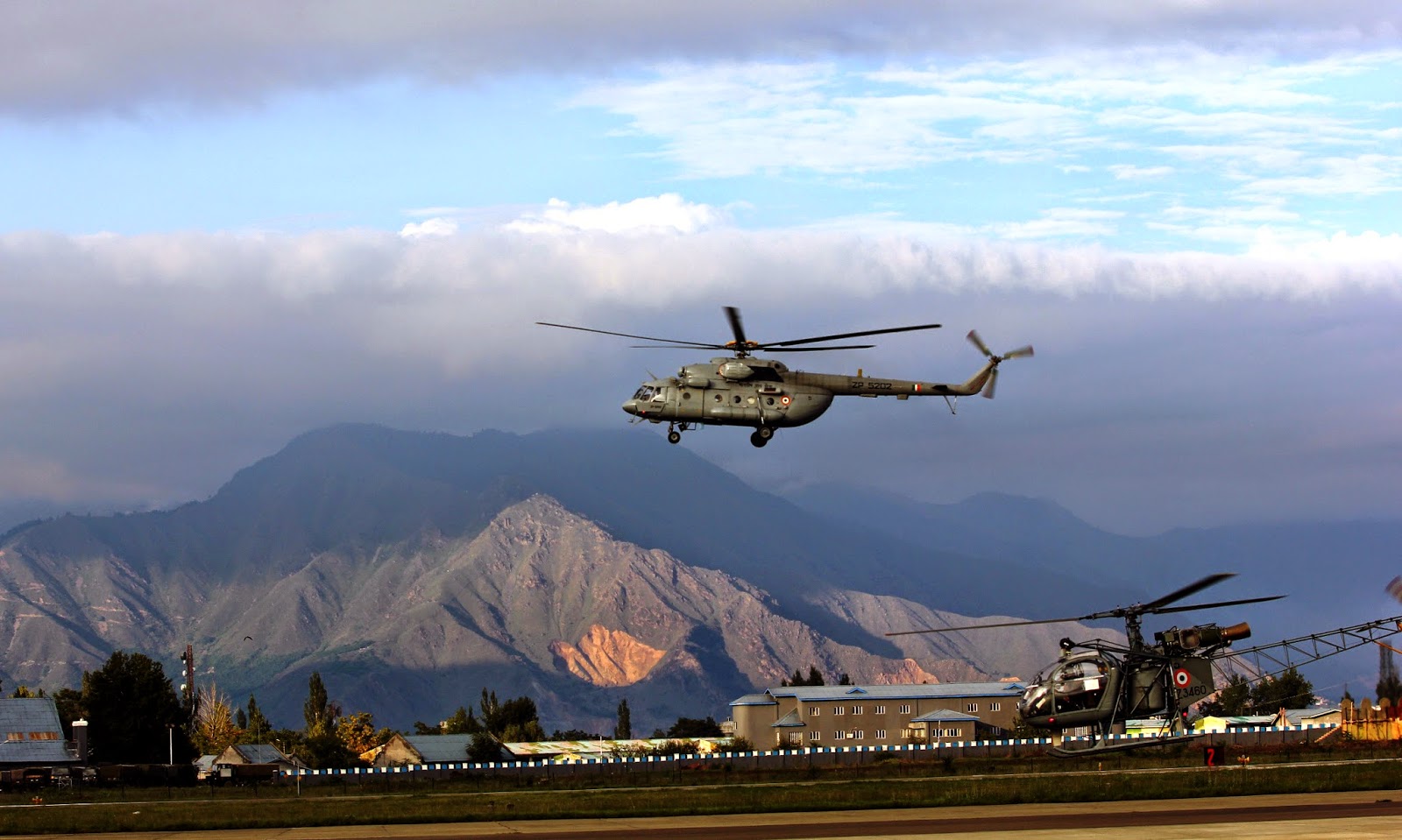 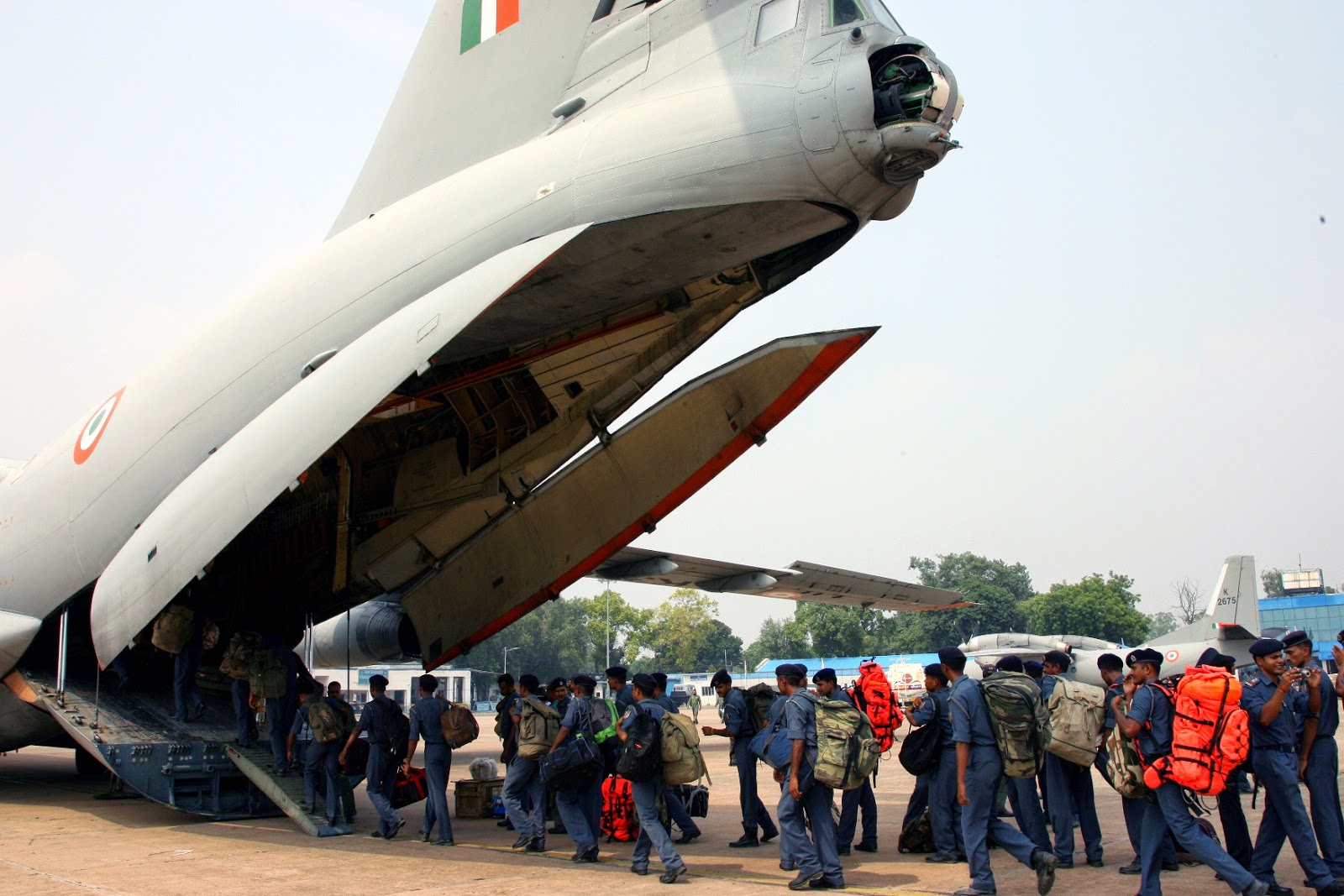 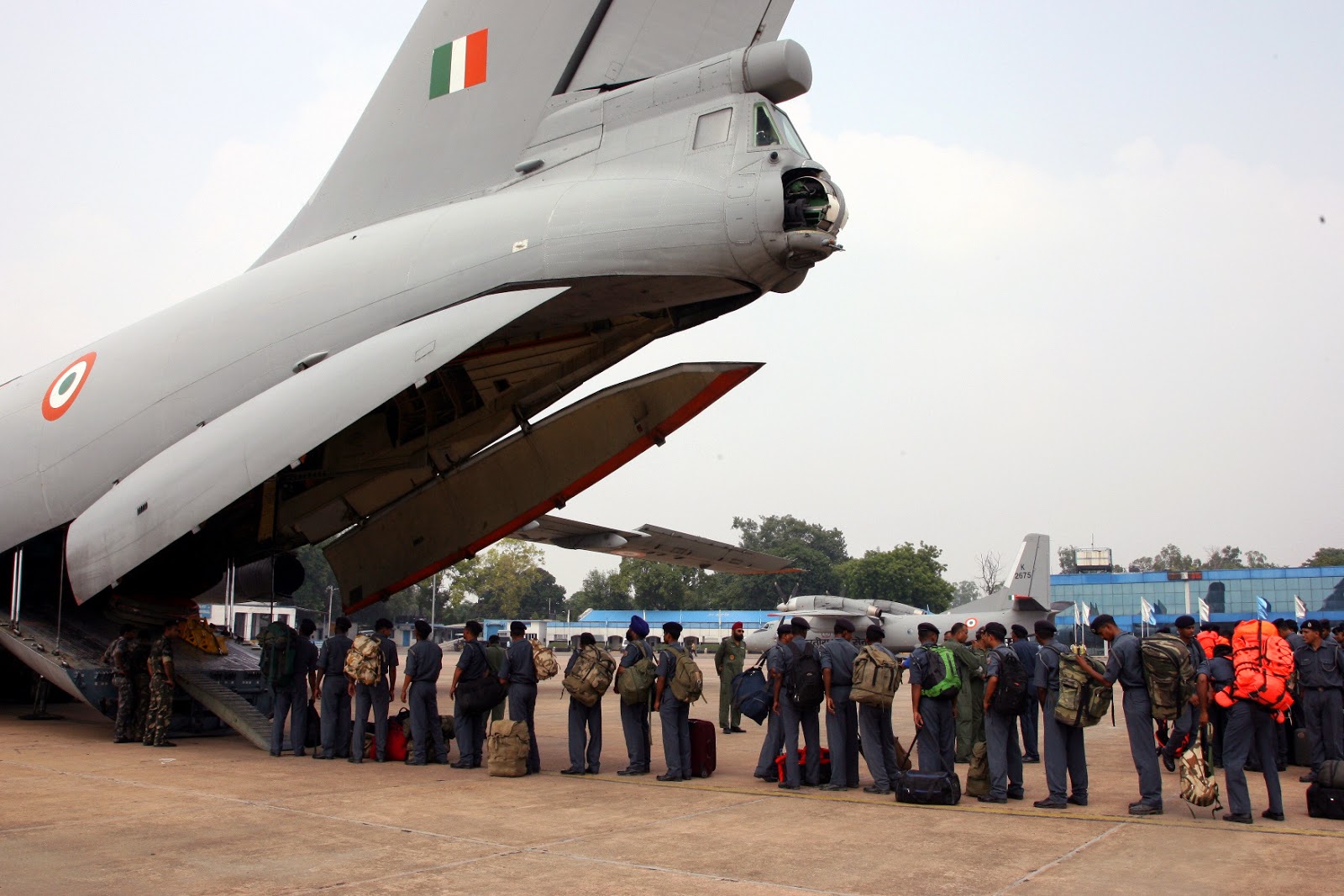 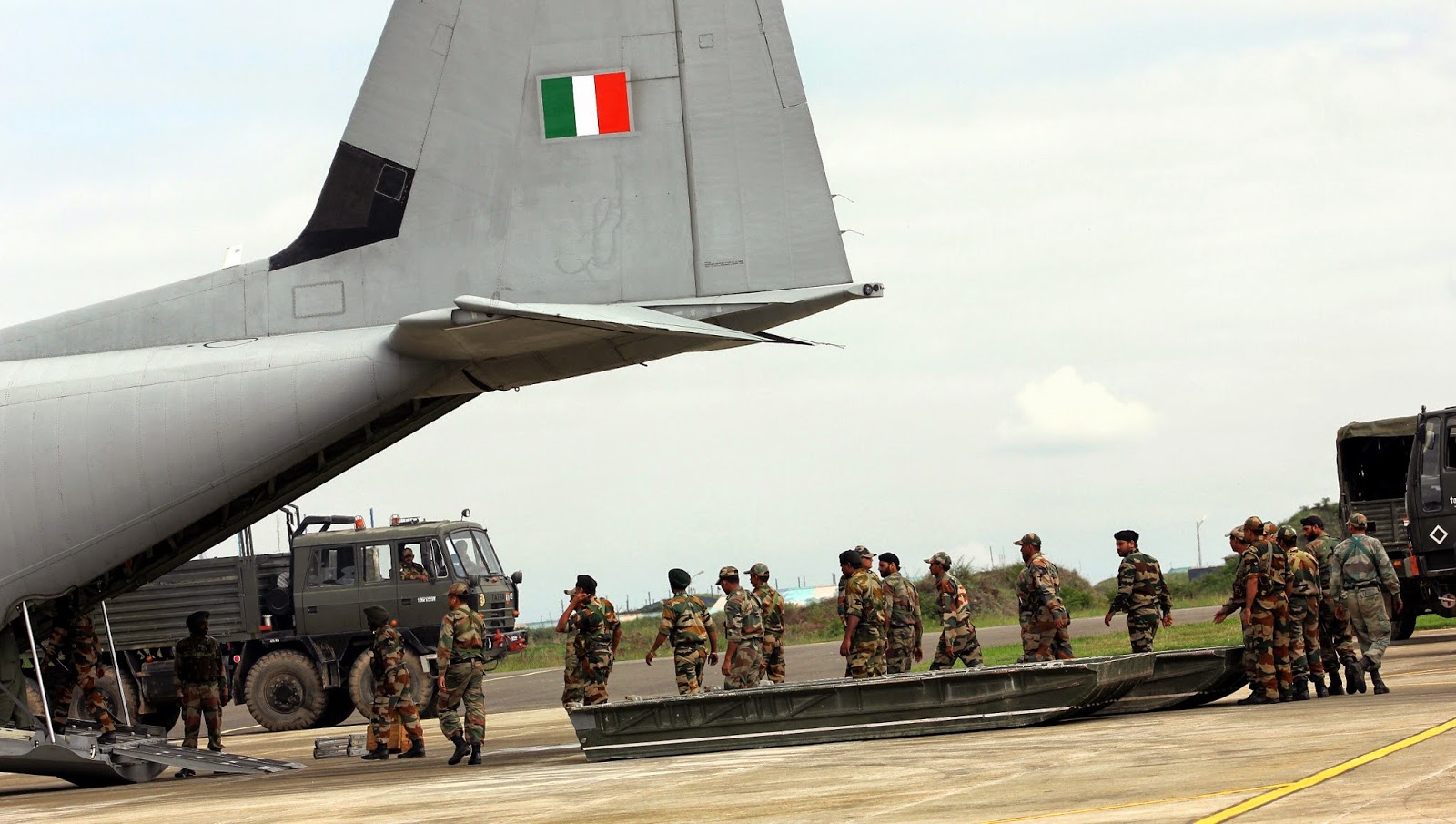 A total of 1737 personnel & 315.5 metric tonnes of relief material have been airlifted till 1300 hrs on 08 September 2014 by the Indian Air Force (IAF) using Forty Five aircraft flying 186 sorties which include both the Fixed and Rotary wing types.  Transport aircraft have been supporting rescue operations operating from Bhatinda, Chandigarh, Srinagar, Jammu, Awantipur and Delhi. Whereas,  Helicopters are operating from Srinagar, Awantipur, Udhampur, Jammur, Pathankot and Sarsawa. Relief materials airlifted today to Srinagar, Jammu, Awantipur and other affected areas include blankets, tents, medical supplies, food (MRE - meals ready to eat) and water.

Air Force helicopters with IAF Garud Commandos on board operating in the flood affected areas have so far winched up 321 victims & relocated them to safer areas.  In some cases the Garuds had to dismantle the roof and evacuate people trapped in the top floors of their houses. All efforts are being made to evacuate as many people as possible despite the inclement weather and limited resources.

The ongoing relief operations in J&K got  fresh impetus with   General Dalbir Singh, COAS making a statement of intent that ‘Indian Army will not move back to the barracks till the last man is brought to safety’. The same was reflected in the Army commitment towards the humanitarian effort as rescue operations were carried out on night of 7/8 Sep and will continue on night of 8/9 Sep, despite the  Army Cantt in Badami Bagh (Srinagar) severely affected by flood waters.

Total of 215  army columns are deployed in state of J&K and 23,000 people have been rescued. Two thousand, of above were rescued from critical areas in Srinagar, namely Rajbagh, Jawahar Nagar, Shivpura and Tent Pura on night of 7/8 Sep. 65 Medical Teams and 15 Engineer Task Forces(ETFs) are deployed and 16 Relief Camps have been set up by the Army.

Relief operations are continuing. 150 tons of rations, One lakh ‘Ready to Eat Meals’, Four lakh liters of packed milk, 100 boats, 3000 tents, 50,000 liters of drinking water and 10,000 blankets have been/ are in process of being airlifted for relief effort.  '

The Army employed  Social Media to accept distress messages on facebook and twitter and further them to functionaries operating on ground. 7000 such distress messages have been relayed till now and many have resulted in rescue of marooned people.
The buildup of troops and relief materials will continue in view of the impending task at hand. Major effort by army aviation is underway.

COMMUNICATION EQUIPMENT ARE BEING AIRLIFTED TO RESTORE CONNECTIVITY IN SRINAGAR

Deployed for the first time in the ongoing devastating flood situation in J&K, the Naval Marine Commandos rescued around 200 personnel at Haigaon on Srinagar – Sopore highway. Rescue efforts are now continuing near PanthaChowk, Srinagar. Additionally, Naval Diving Teams are also positioned on standby at New Delhi, Mumbai and Vishakhapatnam for the rescue efforts.

So far 23,530 stranded people have been evacuated by the Army in different regions of J&K. Army has deployed 215 columns of its personnel for rescue and relief operations. They have distributed 5,000 blankets and 140 tents. The Army also distributed 23,000 litres of water and 600 kilograms of biscuit in the flood-affected areas. Additional water bottles are being airlifted from Chandigarh and Delhi. In an endeavor to provide speedy medical aid to the affected populace, 80 medical teams of the Armed Forces Medical Services have also swung into action.