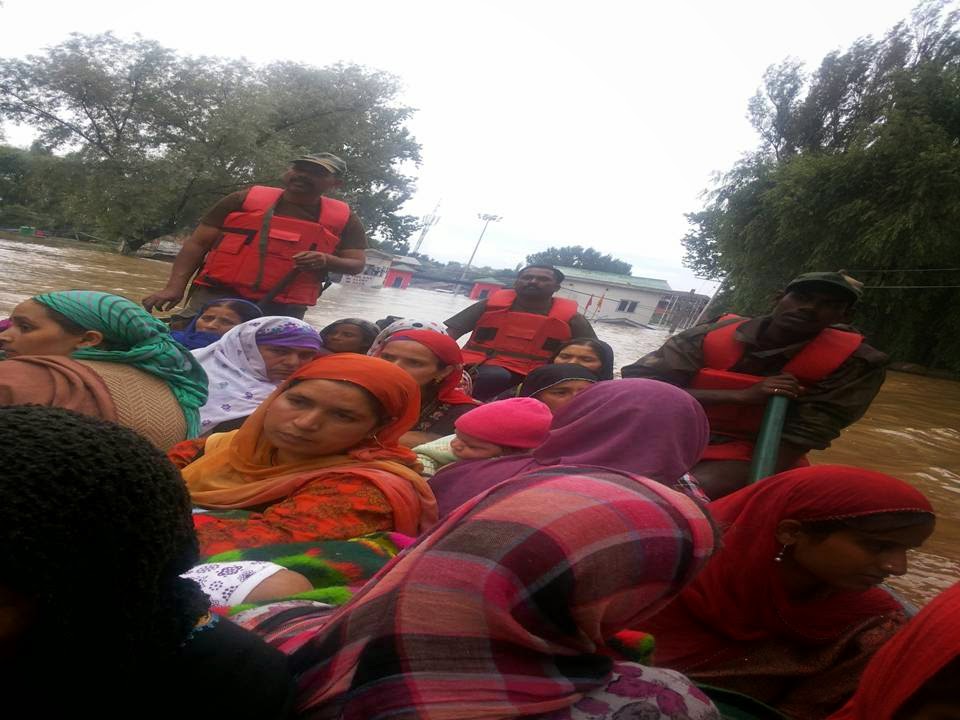 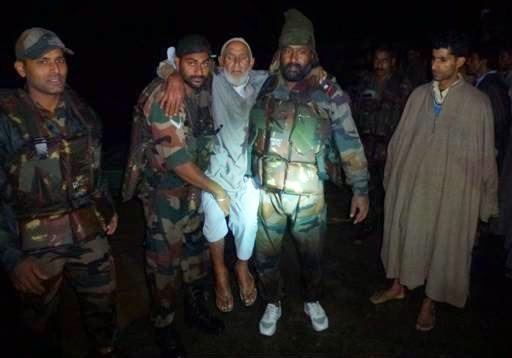 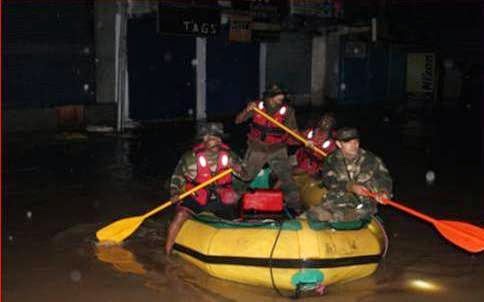 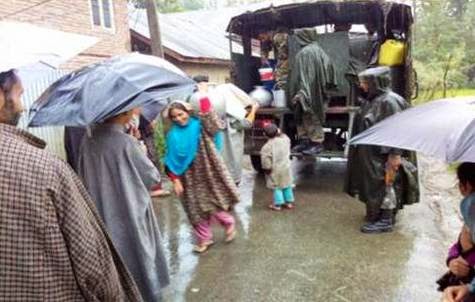 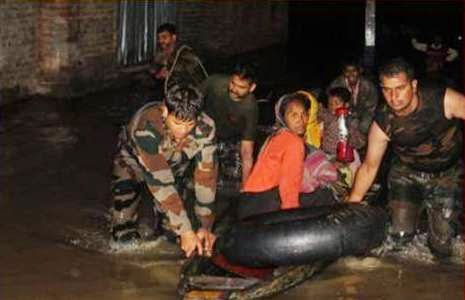 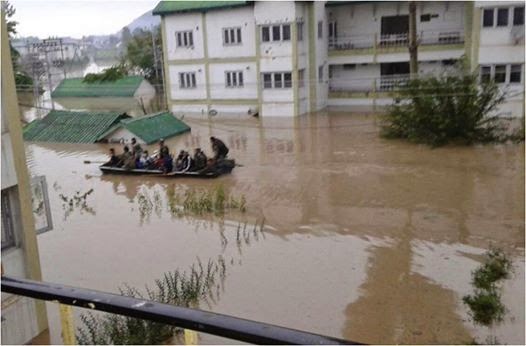 The Army has pressed into service more than One Lakh troops equipped with 170 boats to evacuate the marooned residents of Kashmir Valley. 40-50 additional Boats have been flown in today from areas as far as Rajasthan and Punjab.  About ten Medical teams have also arrived at Srinagar from Chandigarh today and more are expected to reach shortly. Army authorities have also inducted more than ton and a half of food including cooked food and ready to eat food packages as well as about 30 Tons of bottled water daily with the assistance of the Air Force. Not to be left behind, the Army Wives Welfare Organisation (AWWA) have also dispatched relief stores today.
Army medical authorities have flown in 2 Tons of medical stores capable of treating more than 7000 patients from Kanpur.  Additional Paediatrics specialists have also arrived today and more than 100 infants and children have been treated  at the Army Base Hospital.  The Army is executing the complete rescue operation in close synergy with the Indian Air Force and the NDRF teams. This is the seventh day of the rescue operation the Indian Army has employed more than 220 columns and evacuated more than 30000 people to safer places.
The Army’s relief operations are continuing in full swing with the troops working round the clock to evacuate the people under distress and also provide relief to the population in terms of water, food, relief material and medical assistance.
A massive rescue and relief operations by the Indian Armed Forces is on in Jammu and Kashmir with more helicopters and rescue materials including boats pressed into service today.

Armed Forces and NDRF so far rescued 47227 persons in different regions of J&K. Army has deployed 220 columns of its personnel for rescue and relief operations, in which 135 columns deployed in Srinagar region and 85 columns in Jammu region. They have distributed 7,200 blankets and 210 tents. The Army also distributed 42,000 litres of water, 600 kilograms of biscuit, 7 tonne baby food and 1000 food packets in the flood-affected areas. Additional water bottles are being airlifted from Chandigarh and Delhi. In order to meet the shortage of food in the flood-affected area, cooked food including biscuits are being sent from Delhi, Ahmedabad and Hyderabad on a large scale. In an endeavor to provide speedy medical aid to the affected populace, 80 medical teams of the Armed Forces Medical Services have also swung into action.

BSNL with the assistance of the Armed Forces is trying hard to restore its mobile services through satellite network and the telecom network at the earliest. Besides, Air Force communication equipment and a team from private telecom company are being airlifted from Delhi.

To restore the road connectivity, five task forces of Border Roads Organisation, which include 5700 personnel, have been pressed into service. As of now, they have restored the road connectivity between Batote and Kishtwar. Work between Kishtwar and Sinthan Pass is in progress and Jammu to KM 172 is open for light vehicular traffic.

Fifteen engineering task force teams along with boats and other lifesaving equipment have already reached the flood affected areas to supplement the rescue operation. The situation is being continuously monitored and progress of the events are updated at the office of the HQ IDS in New Delhi.

The focus of humanitarian effort by the Army is gradually shifting to from rescue to ‘relief operations’ with 215 columns deployed which have rescued 38,700 people till date, including approx 24,000 from Srinagar City alone.
In Srinagar, Army columns concentrated their efforts  to cover areas of Rajbagh, Shivpura, Indira Nagar, Bemina and Tankpura. In Srinagar itself, 4000 persons were evacuated, which included Ambassador of Nepal along with a 17 member delegation and 28 member Pakistani golf team (part of SAARC team) on 08 Sep.

Deployment of Medical Teams has increased from 65 to 80 in J&K. Additional recourses being inducted include Engineer Task Forces, a Field Hospital,  ‘Ready to Eat Meals’, packed milk, blankets, potable water,  baby food (07 tons) etc. Approx 200 boats have been mobilized and more are underway.

Army has pressed 13 Chetak and 05 Advance Light Helicopters into service. 100 to 120 sorties are being flown daily towards the relief effort.