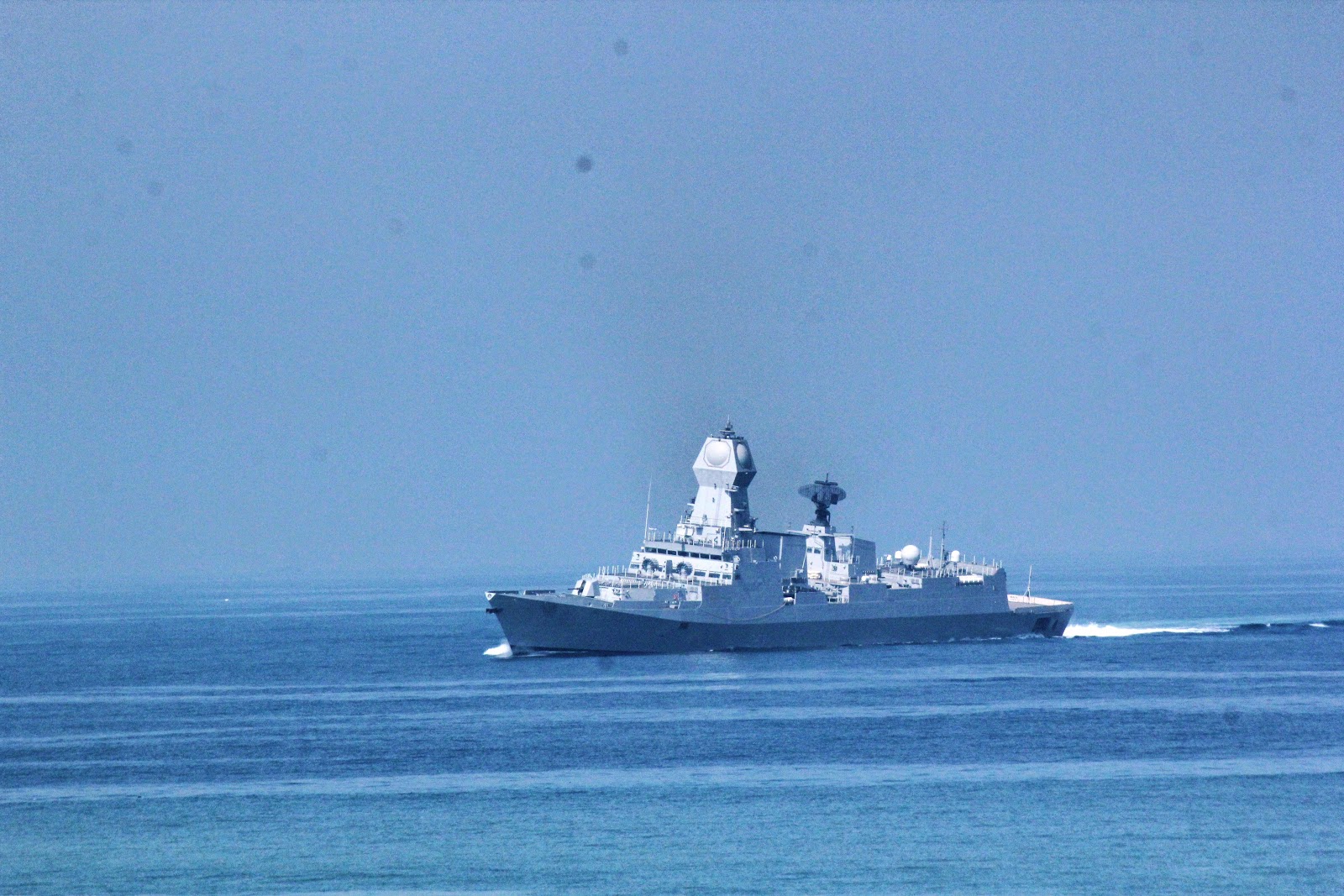 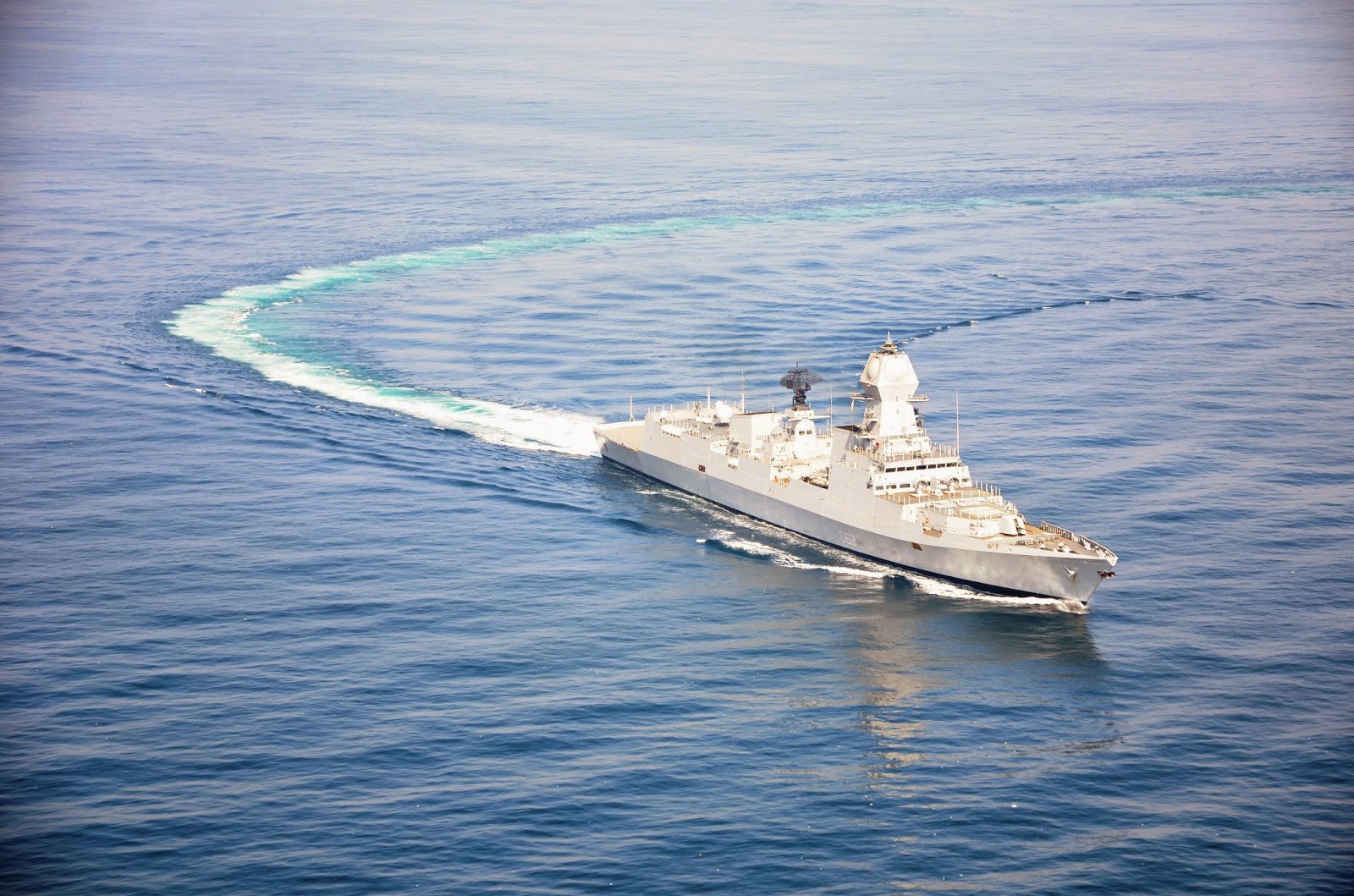 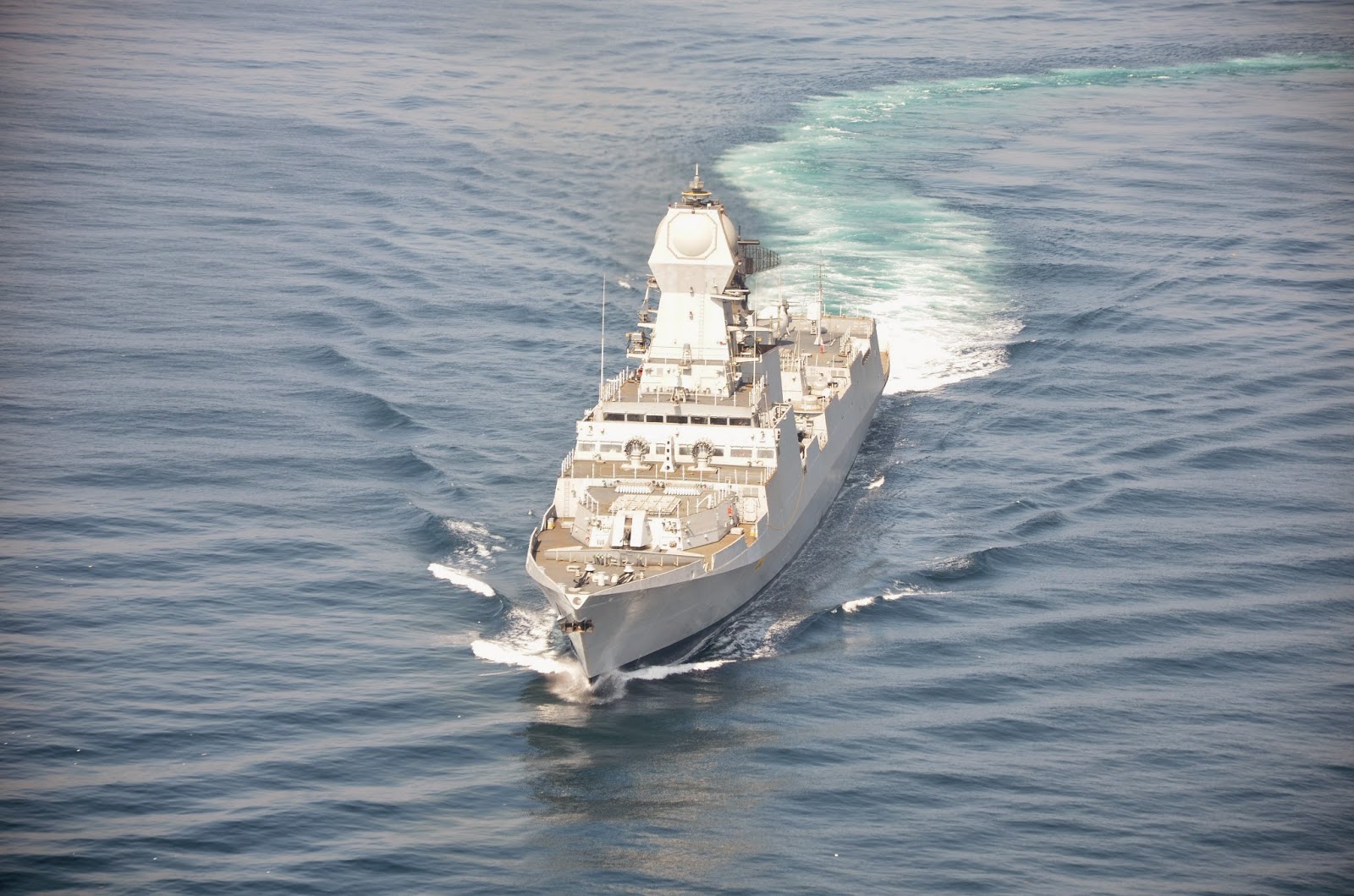 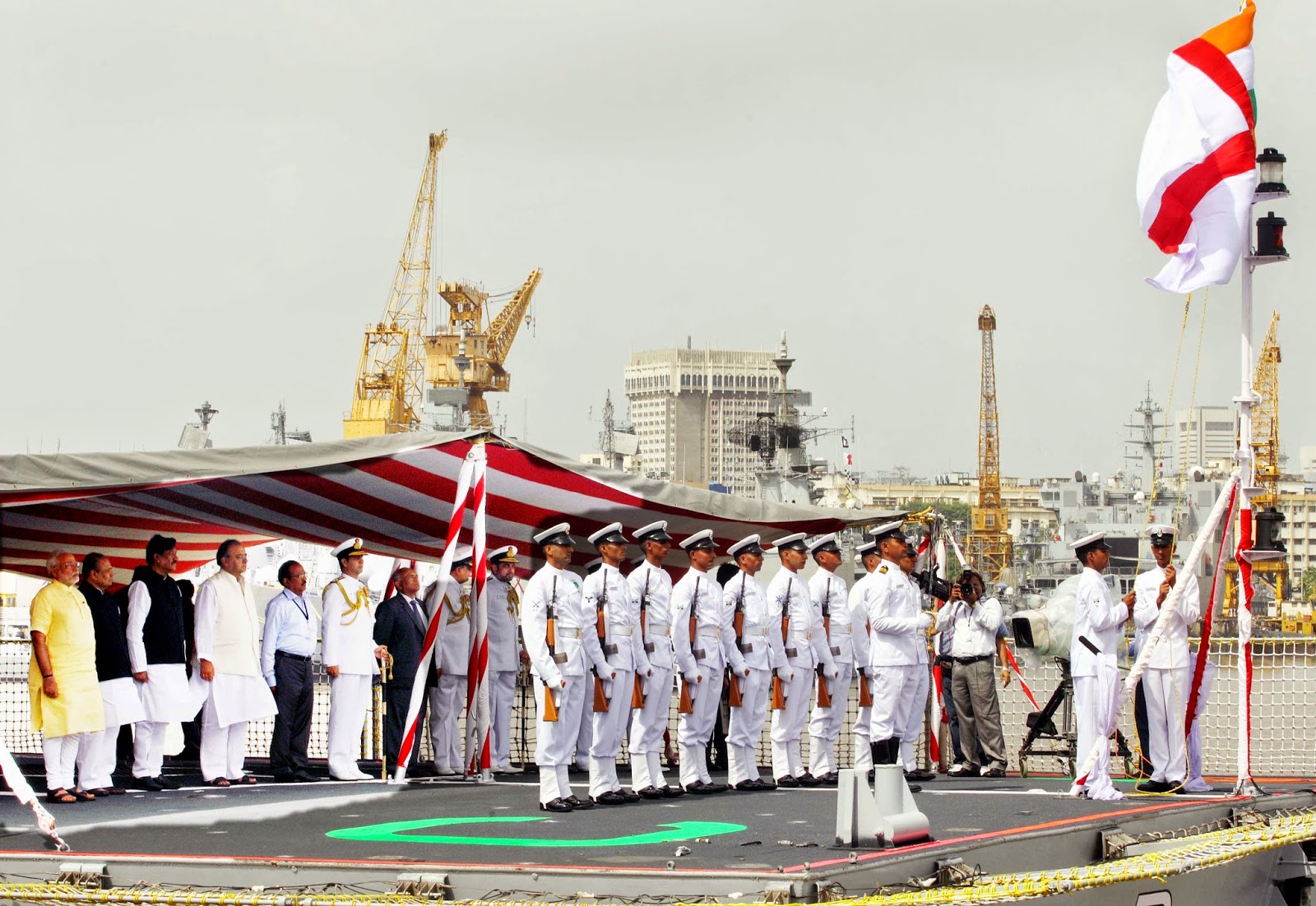 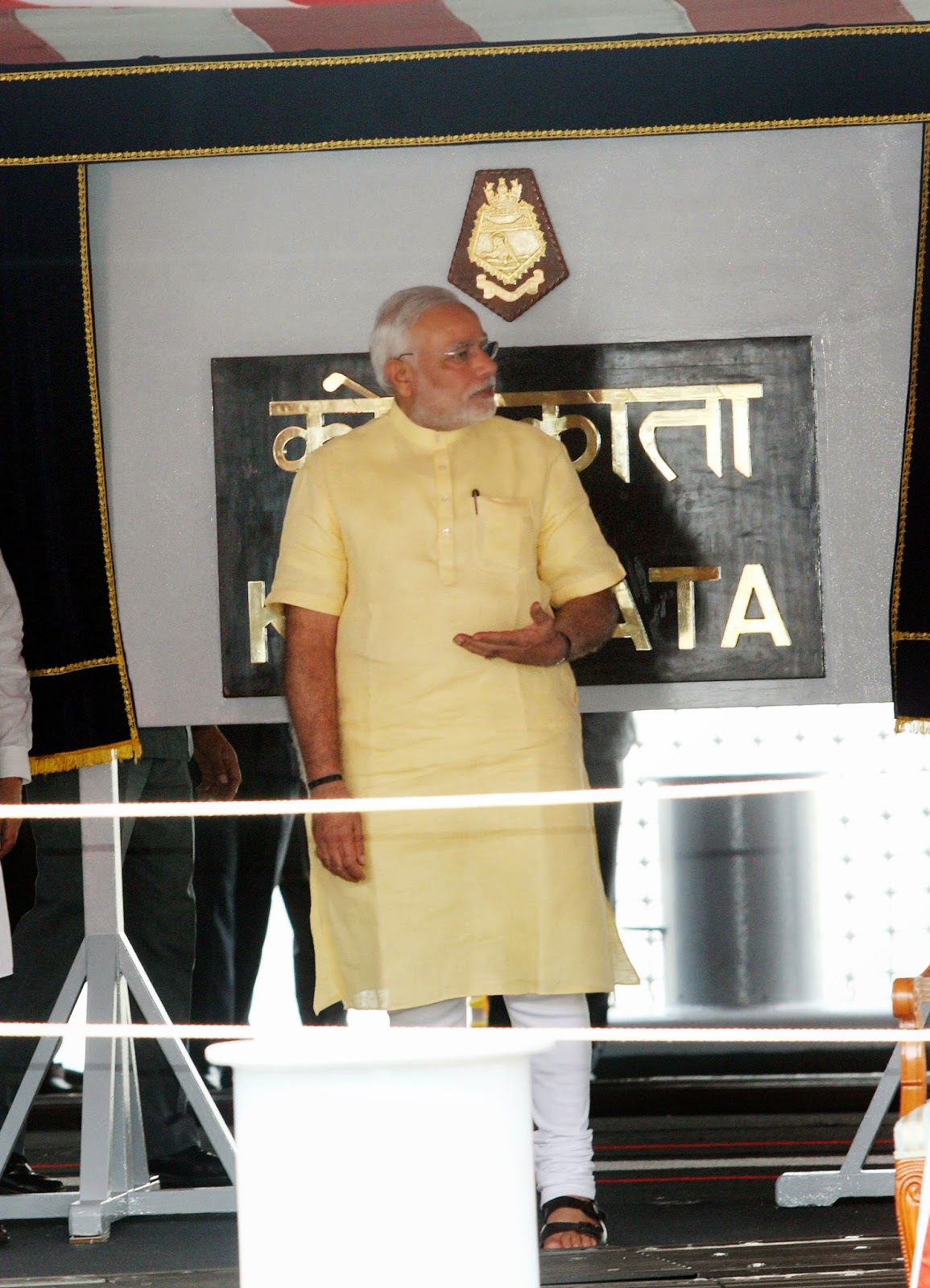 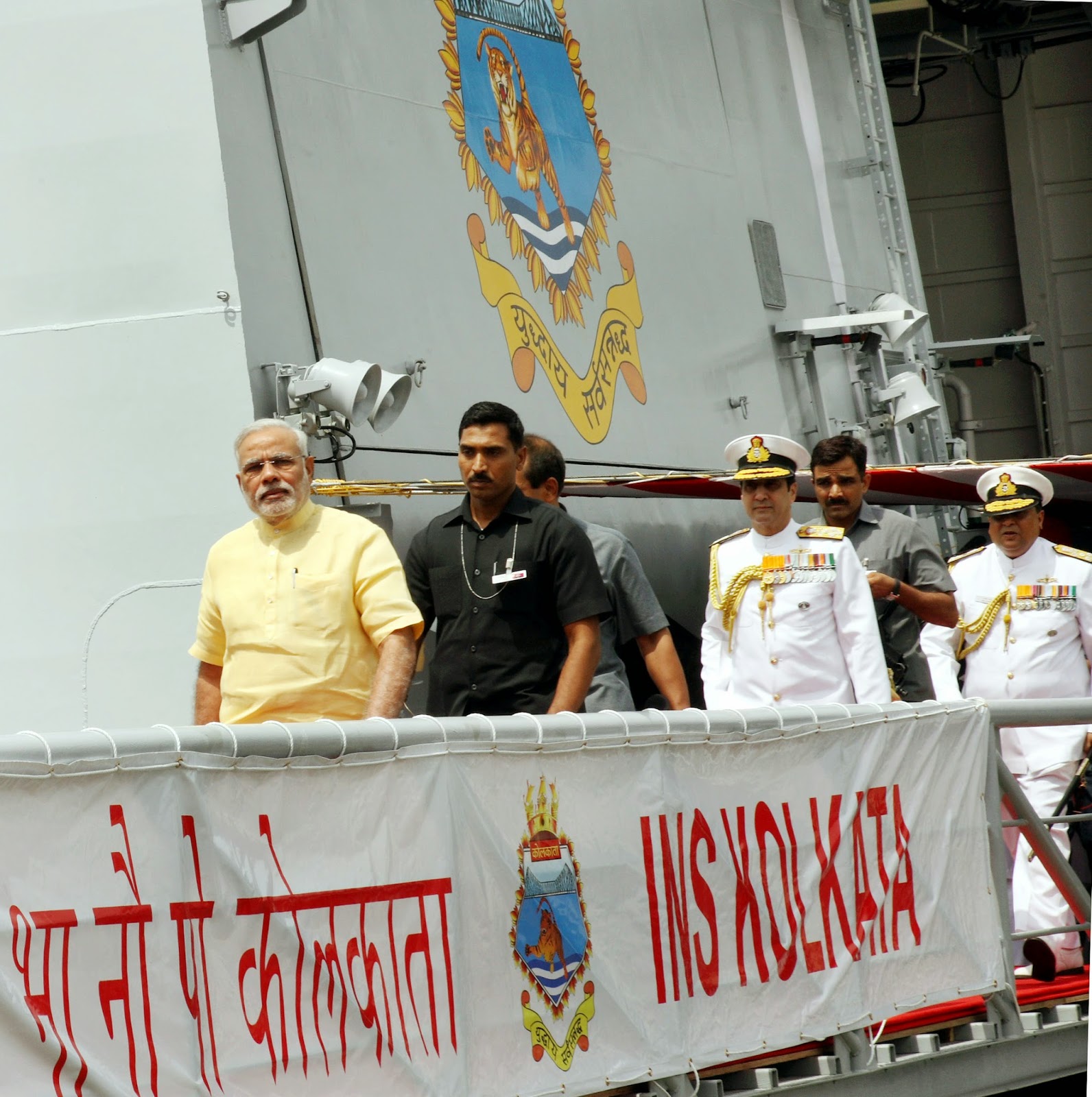 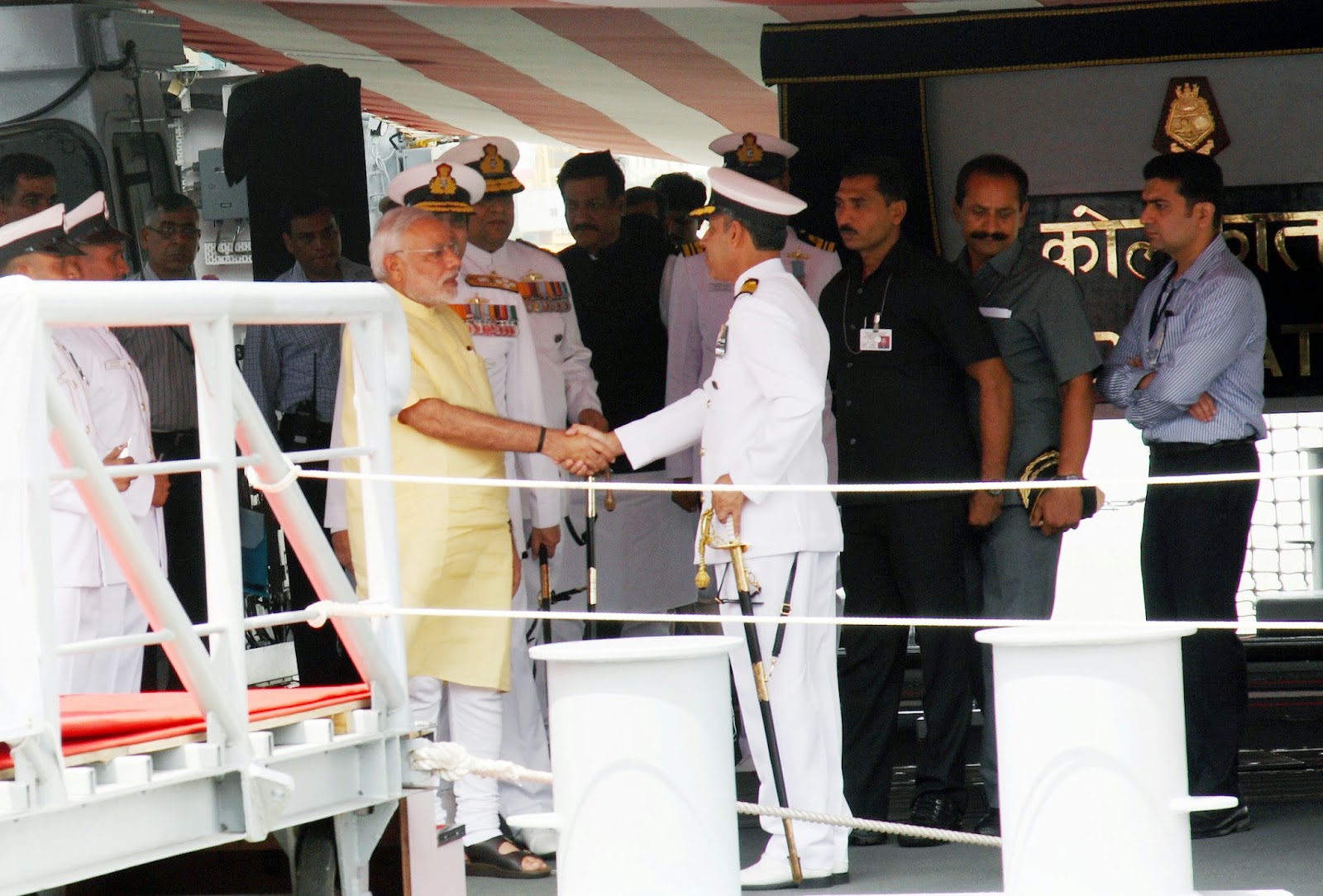 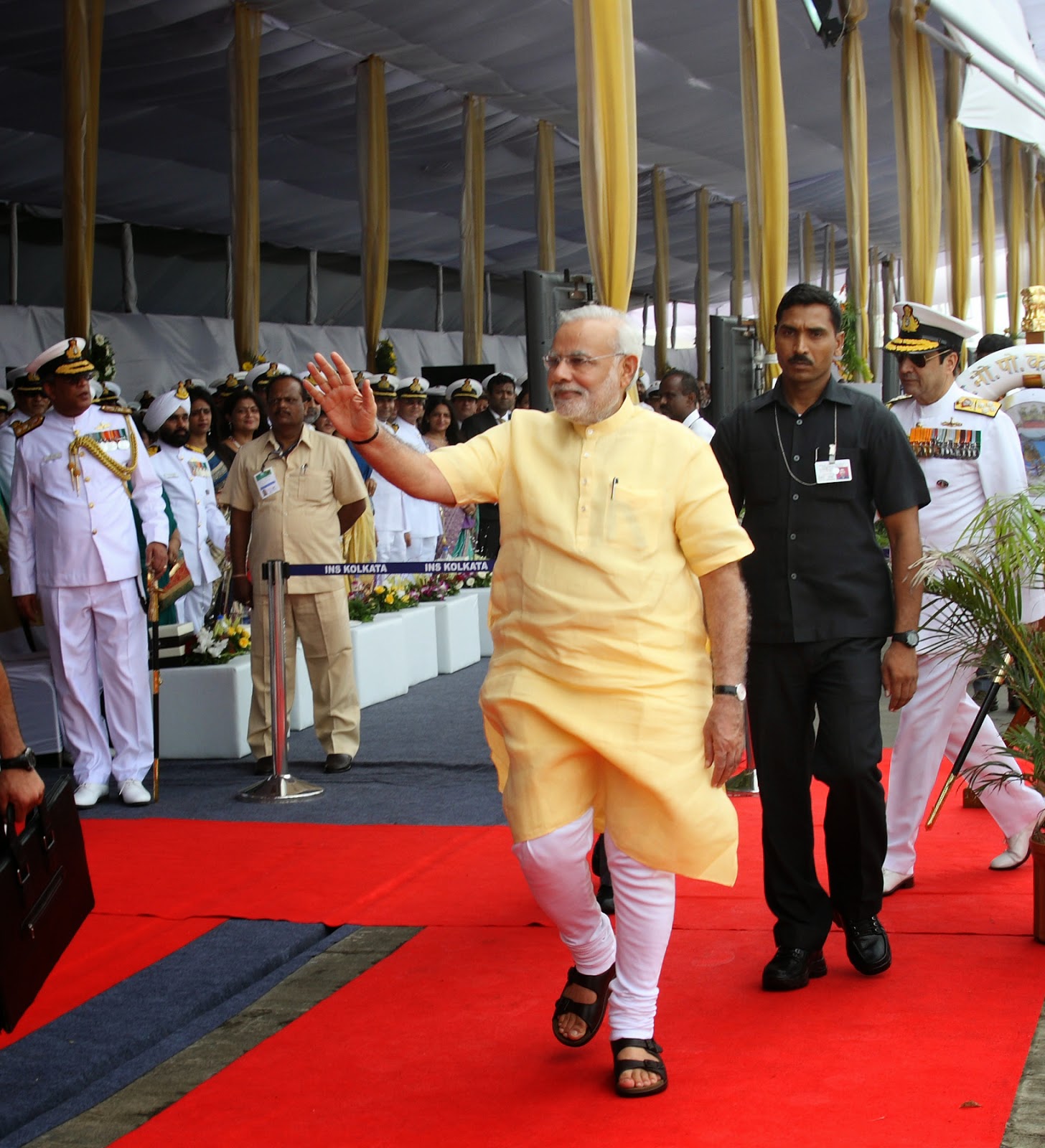 The Hon’ble Prime Minister of India, Shri NarendraModi, commissioned INS Kolkata into the Indian Navy at a glittering ceremony heldtoday at the Naval Dockyard, Mumbai. Kolkata is the lead ship of theindigenously designed and constructed Kolkata-class guided missile destroyers,built by Mazagon Dock Limited, Mumbai. On his arrival, the Prime Minister was receivedby Admiral RK Dhowan, Chief of the Naval Staff and accorded a 100-man Guard ofHonour, before embarking the ship for the commissioning ceremony, which wasconducted in accordance with the traditions of IN. The function was attended by a host of senior dignitaries, fromboth the civilian as well as naval community.

On this momentous occasion the Admiral RK Dhowanwelcomed the Prime Minister and expressed his gratitude on behalf of the Navy. Duringhis address the Admiral said that commissioning of INS Kolkata is a milestonein the self-reliance programme of the Navy and stressed that indigenisation ofplatforms, weapons, sensors and equipment, through public as well as privatesectors, will continue to remain a focus area. He emphasized that the ‘Roadmapfor the Navy’s expansion and growth would continue to remain firmly anchored onSelf-reliance and Indigenisation’.

The Project 15A Kolkata class destroyers are follow-onof the legendary Project 15 ‘Delhi’ class destroyers which entered service inthe late 1990s. Conceived and designed by Indian Navy’s Directorate of NavalDesign, the ships have been christened after major port cities of India viz. Kolkata, Kochi and Chennai. The keel of Kolkatawas laid on 26 Sep 03 and the ship was launched on 30 Mar 06. Regarded as themost potent warship to have been constructed in India yet, this magnificentship measures 164 meters in length and approximately 18 meters in width and hasa full load displacement of 7400 tonnes. The ship has a Combined Gas and Gas(COGAG) propulsion system, consisting of four powerful reversible gas turbinesand can attain speeds in excess of 30 knots. The ship’s electric power isprovided by four gas turbine generators and one diesel alternator, whichtogether produce 4.5 Mega-Watts of electrical power, enough to light up a smalltown. The ship has a complement of 30 officers and 300 sailors.

INS Kolkata incorporates new design concepts forstealth and has many firsts to her credit, including a very large indigenouscombat component. The ship is packed with the most sophisticatedstate-of-the-art weapons and sensors including the vertically launched LongRange Surface to Air Missiles (LRSAM) coupled with the MF-STAR multi-functionactive phased array radar, which is fitted for the first time on an Indian Navalship. She is equipped with advanced supersonic and long range BrahMos Surfaceto Surface Missiles – a joint Indo-Russian venture. The 76 mm Super Rapid Gun Mount(SRGM) and AK 630 CIWS, both manufactured indigenously, can take on air and surface targets. The entire anti-submarine weapon and sensor suite fittedonboard, consisting of Indigenous Rocket Launchers (IRL), Indigenous Twin-tubeTorpedo Launchers (ITTL) and a bow-mounted New Generation HUMSA Sonar are a fineexample of our indigenous efforts in the field of underwater warfare. Thesensor suite includes other advanced surface and air surveillance radars and anindigenous Electronic Warfare system. A state-of-the-art Combat Management System (CMS-15A) has been integrated with the onboard weapons and sensors. Theship is equipped to operate two Seaking or Chetak helicopters.

The ship can betruly classified as a ‘Network of Networks’ as it is equipped withsophisticated digital networks, such as ATM based Integrated Ship Data Network(AISDN), Auxiliary Control System (ACS), Automatic Power Management System(APMS) and Combat Management System (CMS). The AISDN is the information highwayon which data from all the sensors and weapons ride. Whilst remote control and monitoringof machinery is achieved through ACS, the intricate power supply management isdone using APMS. The CMS is used to integrate information from own data sourcesand collate information from other platforms using indigenous data-link system,to provide maritime domain awareness.

The unique feature of this ship is the high level ofindigenisation achieved with most of the systems onboard sourced from withinthe country which has generated a sound vendor base for future ships. Some ofthe major indigenised equipment/ systems onboard INS Kolkata include CombatManagement System (CMS), Auxiliary Control System (ACS), Automatic PowerManagement System (APMS), Foldable Hangar Doors, Helo Traversing System and bowmounted HUMSA NG system. Crew comfort is a significant feature of INS Kolkataand has been ensured through ergonomically designed accommodation and galley compartmentson modular concept.

The ship derives her name from the cultural capital city of India and state capitalof Bengal – Kolkata- 'The City of Joy'. The crest of the ship depicts the 'Howrah Bridge' inthe background and a leaping 'Bengal Tiger' in the foreground, both symbolic ofthe city of Kolkata, riding above blue and white ocean waves. The crew of theship abides by the Sanskrit motto on the crest “Yudhay Sarvasannadh” which means “Always Prepared for Battle”.
The Commanding Officer, Captain Tarun Sobti, read out the Commissioning Warrant,prior to the hoisting of ‘Colours’ (the national flag and naval ensign) for thefirst time in the life of the ship. Followingher commissioning, INS Kolkata will be placed under the operational andadministrative control of the Flag Officer Commanding-in-Chief, Western NavalCommand. On completion of some additional sea trials of ship-borne systems, shewill be assigned to the Western Fleet and would be home-ported at Mumbai.