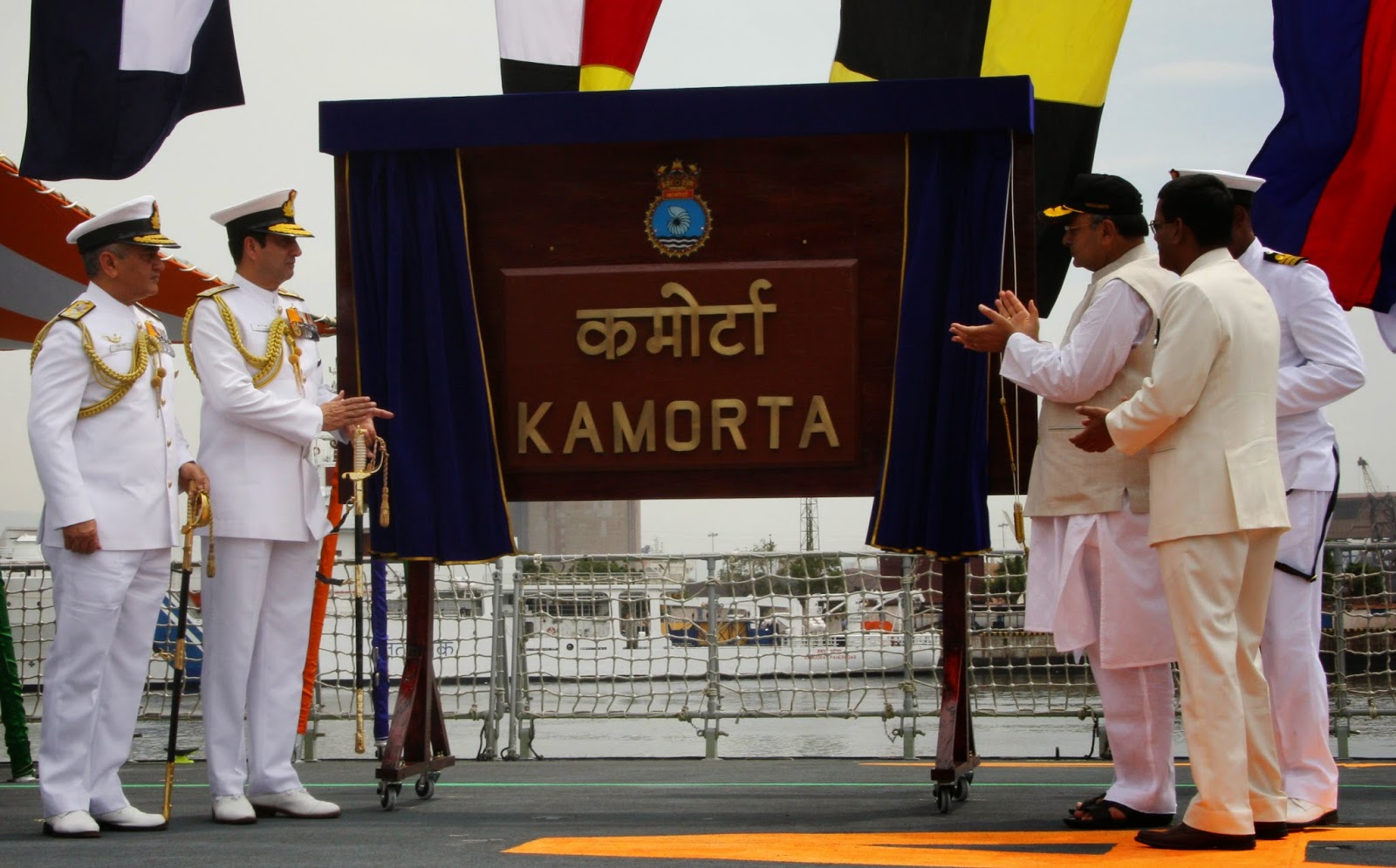 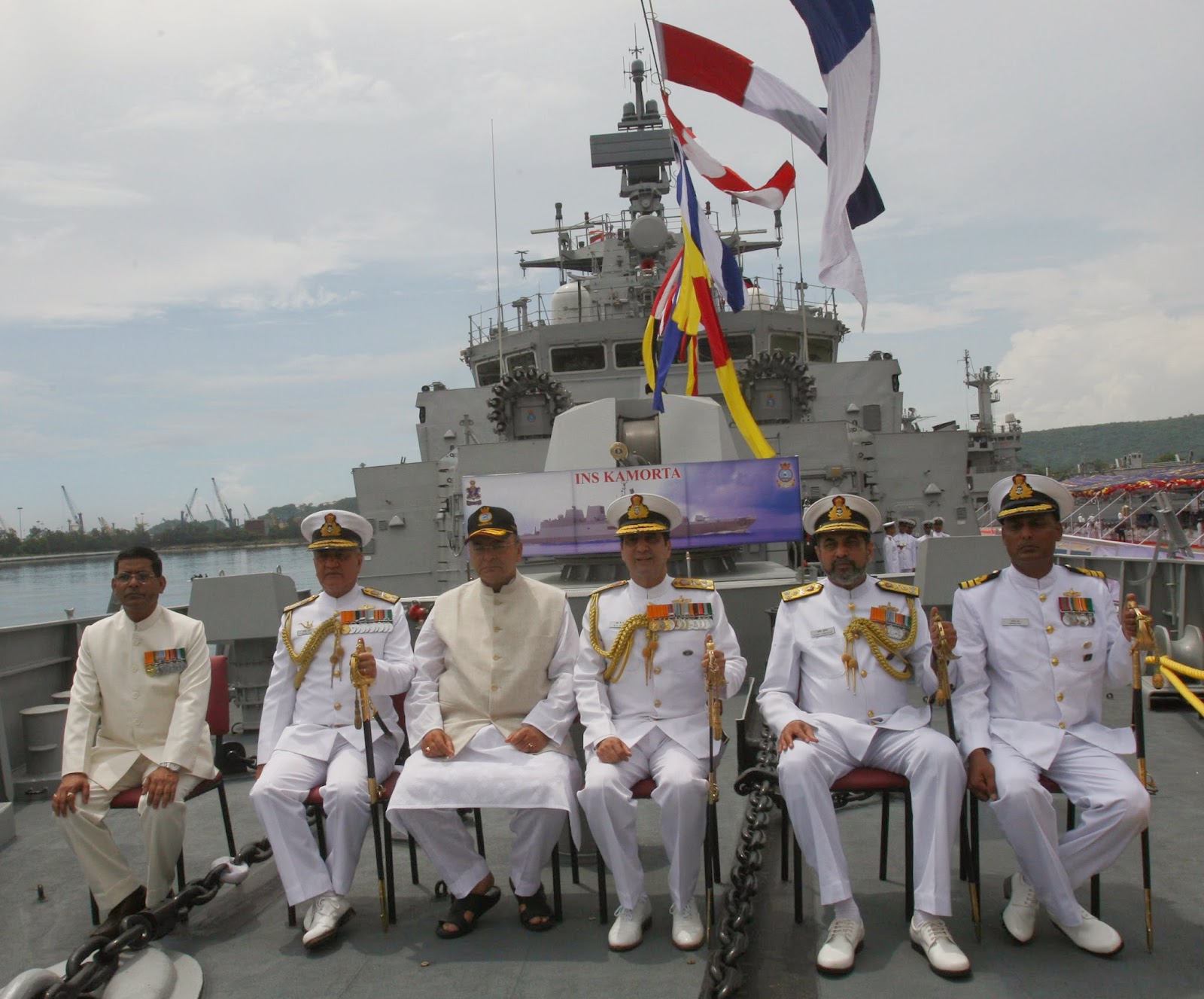 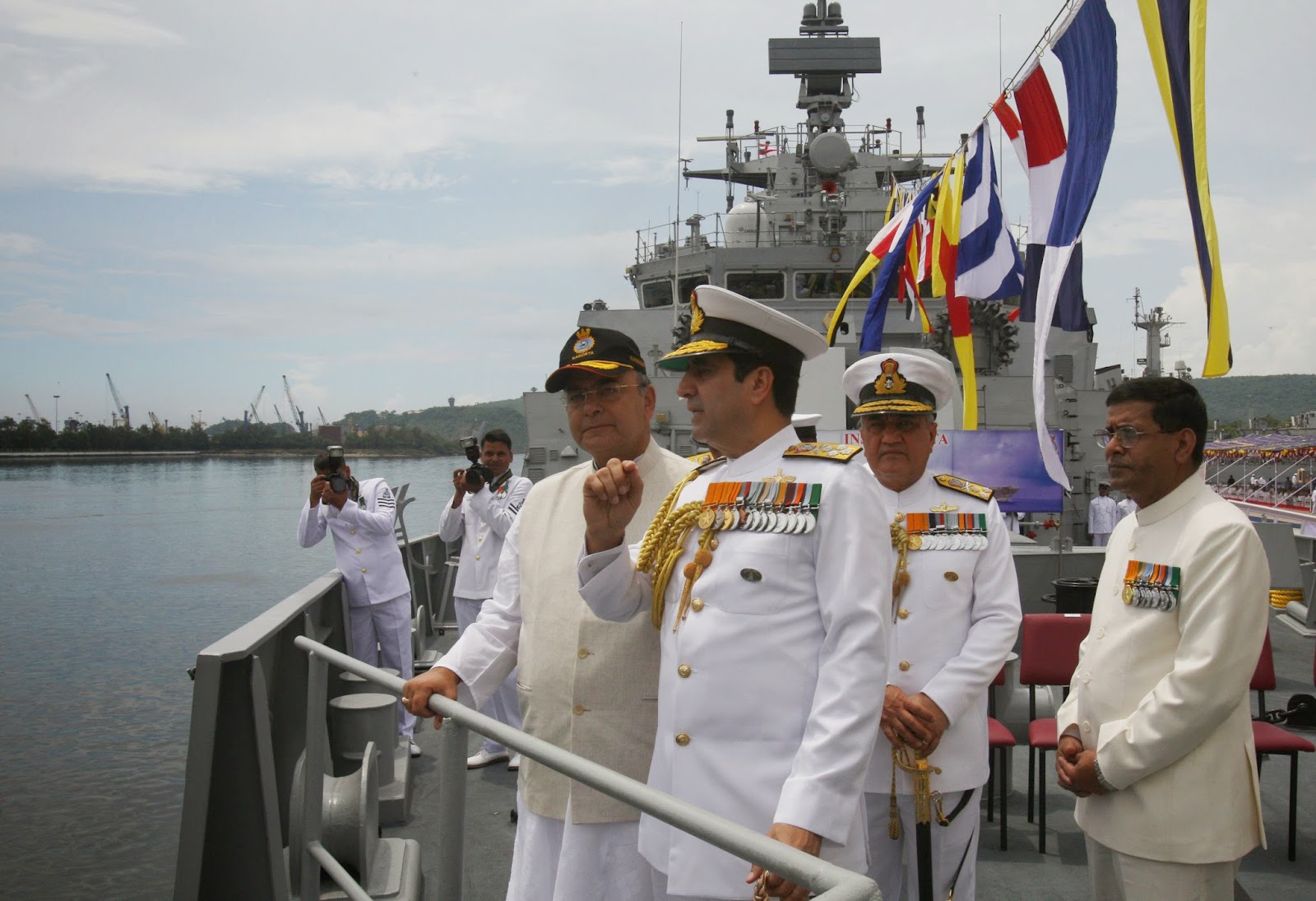 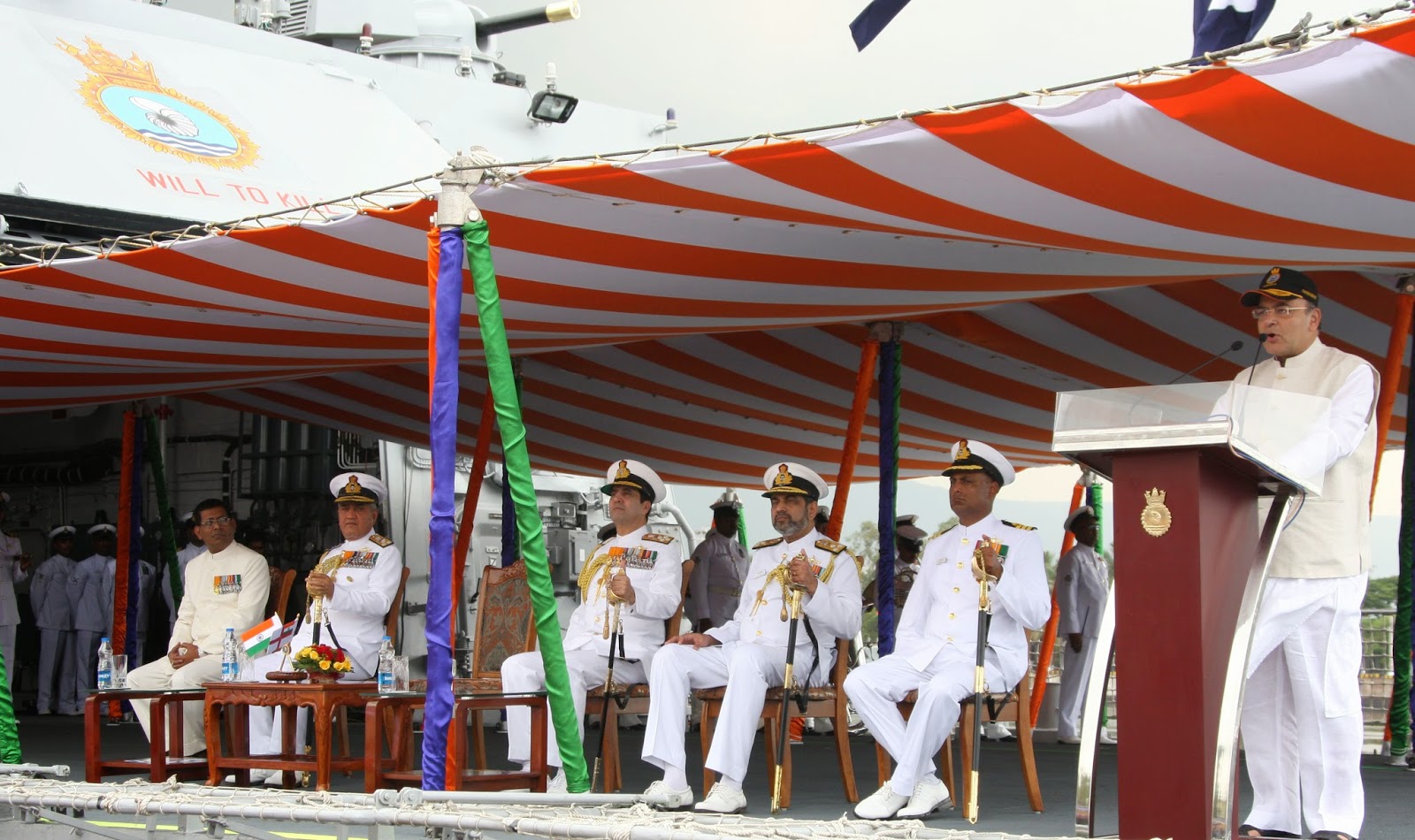 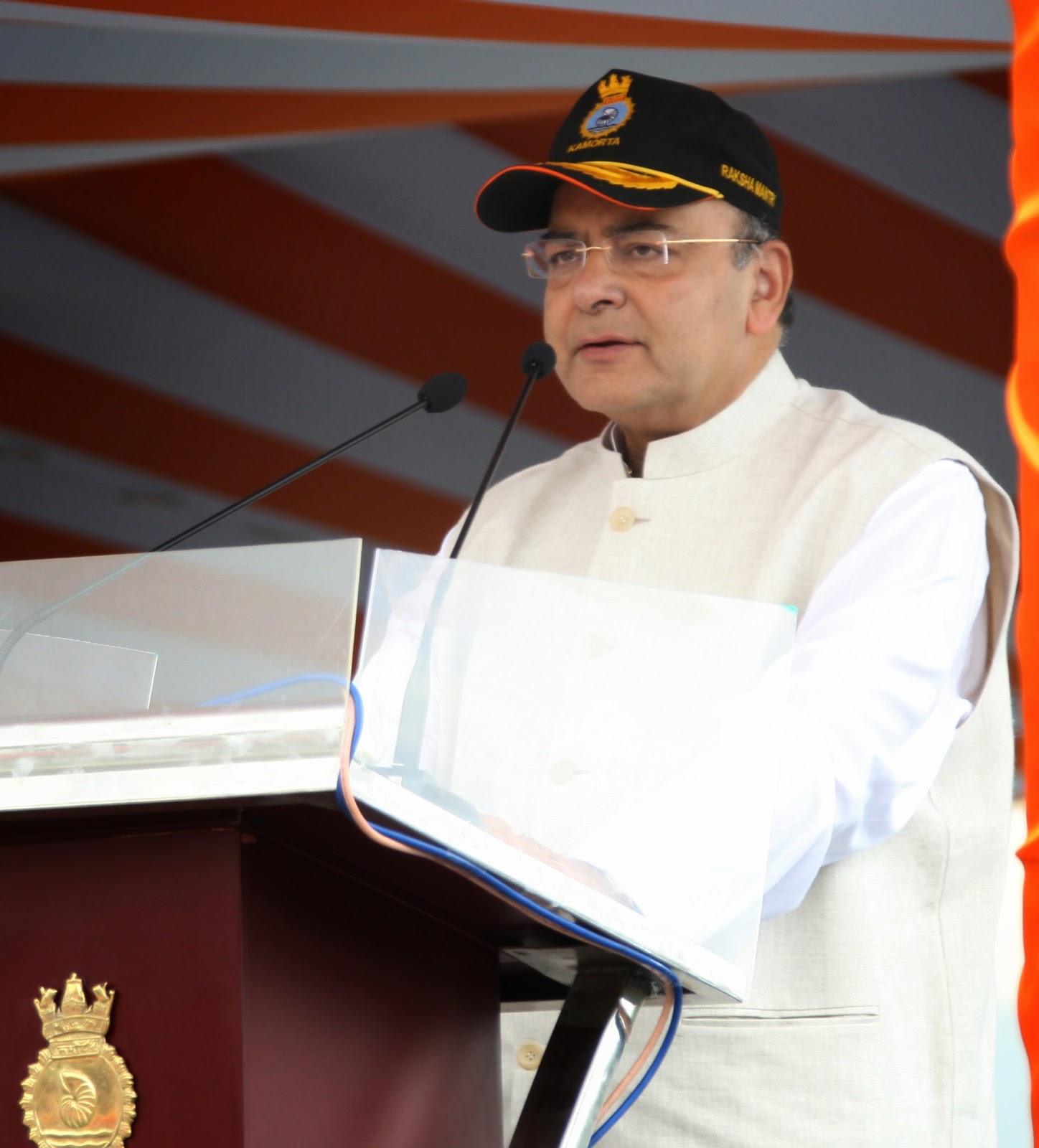 Breaking new grounds in the makingof warships in the country, India today commissioned the first indigenouslybuilt stealth Anti-Submarine Warfare Corvette, INS Kamorta, at an impressiveceremony at Visakhapatnam naval dockyard. The Defence Minister Shri ArunJaitley who commissioned the warship, described the development as ‘the comingof age of our ship building industry’.
Thecommissioning of INS Kamorta has added a new dimension to the ASW capability ofthe Indian Navy and in particular, the Eastern Fleet.  The multifarious missions that can beundertaken by the ship truly reflect the enhanced multi-dimensional capabilityof the Indian Navy.

INS Kamorta is first of the four ASW Stealth Corvettes designed by the Navy’sin-house organisation, the Directorate of Naval Design (DND), under Project 28,with an indigenous component of about 90%. Measuring 110 meters in length, 14 meters in breadth and displacing 3500tons, the ship can achieve speed of 25 Knots. The ship is fitted withAnti-submarine Rockets and Torpedoes, Medium and Close-in Weapon Systems andindigenous surveillance radar Revathi.  The ship is also capable of carrying anintegral ASW helicopter.

Shri Jaitley said in the last threemonths, both the Prime Minister and he had been associated with many anaccretions made into the Indian Navy namely, INS Vikramaditya, INS Kolkotta and INS Kamorta. But this one was special because of the high indigenous content.He said, at the moment, 42 warships are under construction in various shipyardsof the country which is a welcome sign of the health of the ship buildingindustry.    He expressed confidence thatthe measures taken by the government will infuse healthy competitive spiritbetween the public and private shipyards.

Kamorta also boasts of other “firsts” such as a foldableHangar Door and a Rail-less Helo Traversing System, which will give helicopteroperations from the corvette a significant edge over other warships.
Enhanced stealth features have been achieved by ‘X’ form of Hull, full beam superstructure, inclined ship sides and use of Infrared Signature Suppression system for cooling the Engine and Generator exhausts. The Ship has a ‘Combination of Diesel and Diesel’propulsion system with 2 Diesel Engines along with one gear box on each shaft.The common raft mounted Gear Box and Diesel Engines give the vessel very lowradiated underwater noise. This is well complemented with an efficientpropeller which has high cavitation inception speed. The design alsoincorporates active shaft grounding system and multi zone Impressed CurrentCathodic Protection for suppression of Extremely Low Frequency Electromagneticsignature. The very low under water acoustic signature makes it a ‘silentkiller on the prowl’.

INS Kamorta has a multitude of systems such as TotalAtmospheric Control, Integrated Platform Management, Integrated Bridge, BattleDamage Control and Personnel Locator System. This provides a contemporary andprocess oriented System of Systems for optimal functioning of the warship.

With her state of the art weapons and sensors, INS Kamorta is well equipped to fight in Nuclear, Biological and Chemical warfare conditions. The ship, in essence, showcases the nation’swarship design capability and industrial prowess

The ship has a complement of about 15 officers and 180 sailors. The accommodationand living spaces have been designed with special emphasis on ergonomics andhabitability. The ship is commanded by Commander Manoj Jha, a GunnerySpecialist.