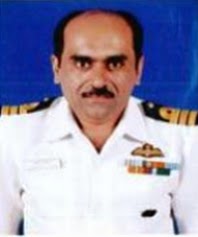 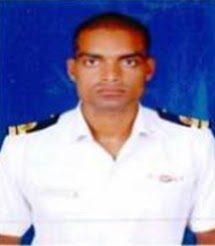 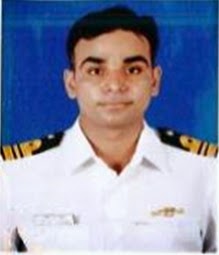 FOR SEARCH AND RESCUE IN ADVERSE WEATHER CONDITIONS

On 27 Sep 13, Cdr KVK Gosavi, while borne with 842 Squadron (Helicopters) was required to undertake medical evacuation of two crew from a merchant ship      (MV Kurobe) located 35 NM into the sea off Mumbai. At that time both the helicopters in the Squadron were under maintenance. The officer exhibited professional competence and planning skills of a high order in ensuring that the helicopter was made available for the mission without compromising in maintenance tasks.
Considering the prevalent adverse weather, extended range of the ship at sea and the available experience in the Squadron, the officer led from the front and piloted the mission as Captain of the aircraft.
During the mission, the officer displayed superior flying skills and landed the helicopter safely in hostile sea conditions with utmost precision on an improvised helipad precariously located between two large cranes about 25 meters apart. The low visibility, ongoing rains and strong winds along with rough sea state required resolute and CPR was provided to both the patients, Commander KVK Gosavi innovatively embarked the patient, Mr Retituto Manlapaz, a Philippines national who required an immediate medical evacuation in the helicopter which was in SAR role on a Neil Robertson stretcher catering for the medical and flight safety. Thereafter the officer brought the patient to Mumbai safely transiting through the enroute adverse weather and heavy rains thus effecting a successful MEDEVAC at extended range.
Commander KVK Gosavi, the pilot in Command of the helicopter maintained his composure, reassured his crew, and displayed a high level of professionalism and skill in piloting at aircraft whilst effecting a successful MEDEVAC of a foreign national at extended ranges at sea. The high levels of professionalism and resoluteness towards accomplishment of the mission in hostile weather conditions, whilst operating at fringes of Chetak helicopter ranges are beyond the call of duty, highly praiseworthy and in keeping with the highest traditions of the Services. Commander KVK Gosavi, has been awarded Nao Sena Medal (Gallantry) for the same.

FOR BRAVERY AND COURAGE WHILE SAVING FELLOW
SUBMARINERS AND FIGHTING FIRE ONBOARD INS SINDHURATNA
LT CDR MANORAN KUMAR (52423 T) AND LT CDR KAPISH SINGH MUWAL (52360 Z)
New Delhi: Shravana 23, Saka 1934
Thursday, Aug 14, 2012
On 25 Feb 14 with a crew of 94 personnel embarked onboard, INS Sindhuratna sailed for sea examination post completion of refit. During the early hours of 26 Feb at about 0530 hrs, excessive build-up of smoke was reported in the IIIrd compartment which also houses one-half of the submarine’s main batteries. Lt Cdr Manoranjan Kumar and Lt Cdr Kapish Singh Muwal in their capacity as the Officer-in-charge (IIIrd compartment) & Deputy Electrical officer respectively immediately mobilized all available personnel and damage control assets and commenced valiant effort towards controlling the grave emergency. As the ambient temperature in the compartment increased due to heat and as the visibility reduced, both officers, unmindful of their personal safety continued to fight the emergency.
At one stage, they realised that conditions for human survival in the vicinity of damage had deteriorated and they immediately ordered evacuation of the damage control team comprising 13 personnel to safer areas thus drastically reducing the number of casualties. They not only did the fire-fighting themselves but also provided extremely vital inputs to the Command Post on the status of damage control and further likely implications. They limited the damage area preventing the spread of fire to the battery compartment, thus obviating an extremely dangerous possibility of damage to entire submarine. Even the breathing had become extremely difficult both continued pushing the crew to safety and fought the emergency undeterred.  They were last seen fighting the fire/smoke, rather than saving themselves. Their exemplary effort to douse the smoke in extremely hazardous conditions was beyond the call of duty, which ensured survival of 94 crew members and safety of submarine.
The officers laid down their life keeping with their responsibility as the Compartment officer & Electrical officer, safety of the submarine and personnel above their own. Their singular act of courage and bravery resulted in the damage being contained, casualties being minimised and extensive structural damage to the submarine being averted. Their valor and dedication is in keeping with the highest traditions of the Indian Navy and ethos of the officer corp. Both the officers have been awarded Shaurya Chakra (Posthumous).