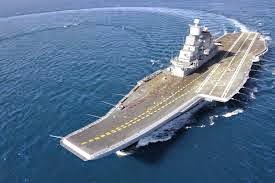 The Prime Minister Shri  Narendra Modi is scheduled to embark INS Vikramaditya, the latest aircraft carrier inducted into the Indian Navy, for a ‘Day at Sea’ with the Western Fleet tomorrow ( 14 Jun 14). The Prime Minister would be embarking the ‘carrier at sea’ by helicopter and is likely to witness a host of exercises by the frontline warships and aircraft of the Indian Navy.

Shri Modi would be received at INS Hansa (Naval Air Station at Goa) by the Chief of Naval Staff Admiral RK Dhowan and a 150 men ceremonial ‘Guard of Honour’ would be presented to him on arrival.
During the day, the  Prime Minister would witness ‘Air Power Demonstration’ by various naval aircraft including MiG 29K, Sea Harriers, P 8 I Long Range Maritime Patrol Anti-Submarine Warfare aircraft, TU 142M, IL 38 SD, Dorniers, Kamov and Sea King helicopters. He will also watch high speed manoeuvres by Western Fleet ships including aircraft carrier INS Viraat, Delhi class destroyers, Talwar class frigates etc. The Prime minister shall also witness the take-off and ‘arrestor wire landing operations’ and high speed low level operations of MiG29 K integral fighters onboard the flight deck of INS Vikramaditya.
The Prime Minister is also scheduled to meet and interact with the crew onboard and address the officers and sailors of the Indian Navy.

India's INS vikramaditya is really a powerful gem for Indian Navy, was really felt happy when it was included into the navy in Jan'14, Indians must be proud of INS Vikramaditya. I read here that it is equipped with 234 new hull sections constructed using 2,500t of steel. It has an overall length of 284m, a maximum beam of 60m, height of about 60m and a displacement of 44,500t. Go Indian Navy Go ... I hope Indian Navy will get more these kind of Aircraft carriers in coming Future ....