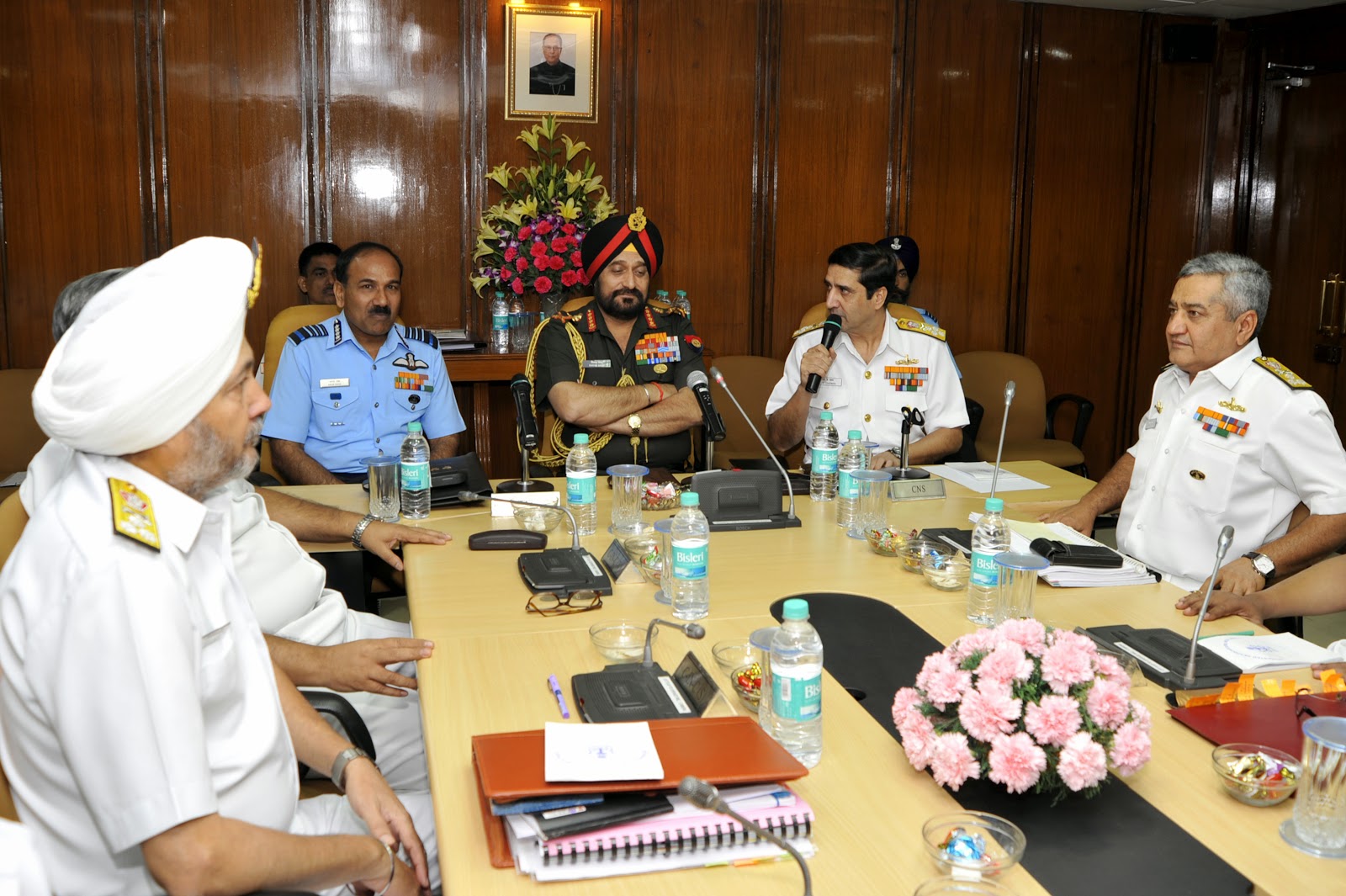 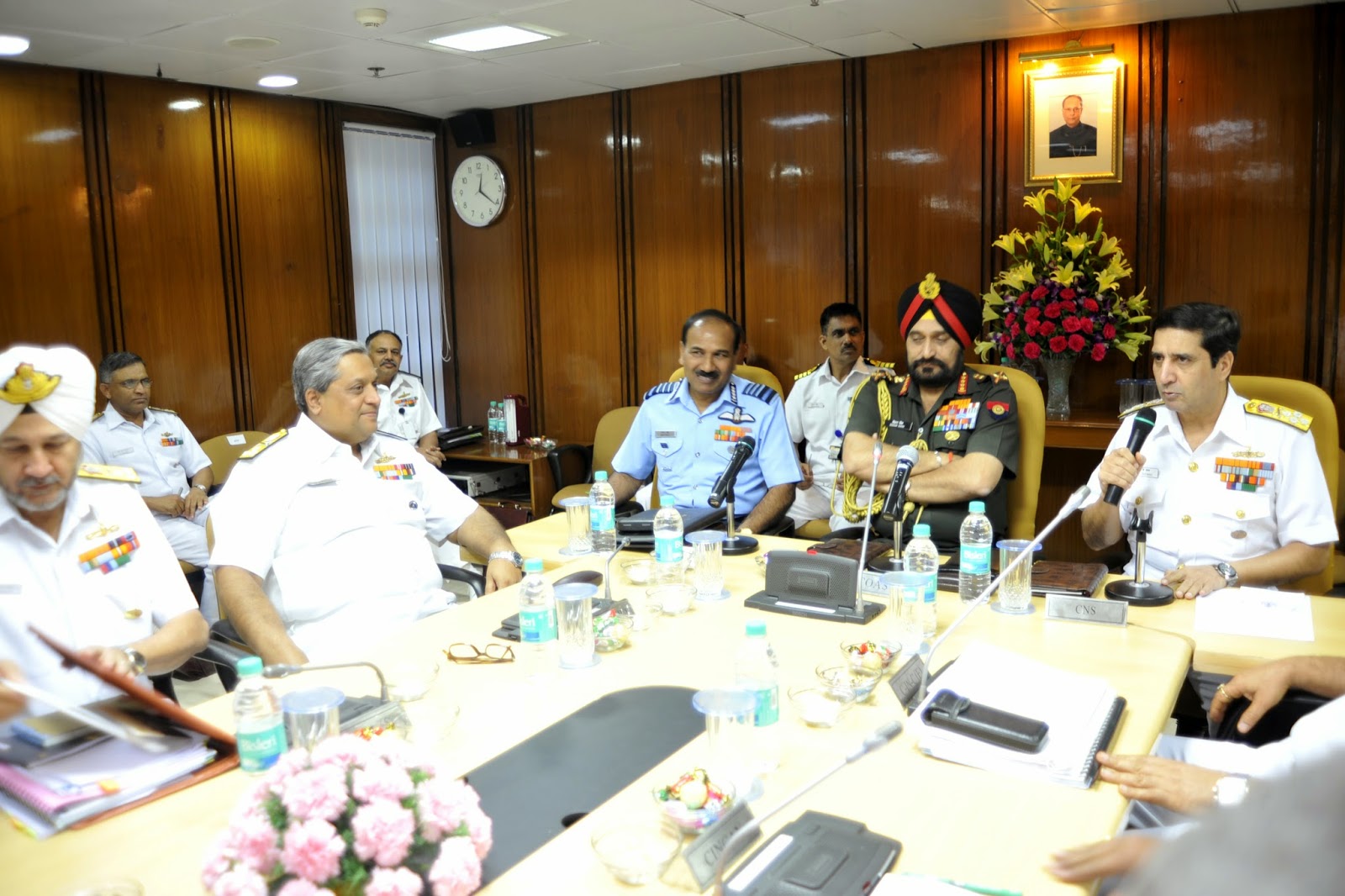 The first edition of the bi-annual Naval Commanders' Conference was conducted at New Delhi from 24-26 Jun 14. The Hon'ble Raksha Mantri inaugurated the conference and complimented the Indian Navy on its all round performance.

CNS emphasised that combat readiness of the fleet and other operational formations is of prime importance and focussed efforts, as hitherto, are required at all levels to ensure sustained growth of the Navy into a formidable multi-dimensional force. Asserting that induction of Vikramaditya with integral fighter aircraft is a substantial boost to the Navy’s capabilities, the Admiral said the Navy’s surface capability is further poised for a quantum jump with the planned induction of Kolkata (P15 A Destroyer) and Kamorta (P 28 ASW Frigate) in the near future.

The CNS expressed satisfaction at the steady augmentation of assets in the aviation arm of the Navy with progressive induction of P 8I LRMR aircraft, commissioning of ALH squadron and induction of AJT aircraft. Discussions were also held on the ongoing LCA (Navy) project. Capability gaps resulting from the ageing submarine fleet, shortage of integral helicopters in the fleets and the need for Mine Counter Measure Vessels (MCMVs) were also discussed.

The Admiral discussed the self-reliance programme of the Navy and stressed that indigenisation of platforms, weapons, sensors and equipment, through public as well as private sectors, should remain an area of focus. He emphasized that the ‘Roadmap for the Navy’s expansion and growth would continue to remain anchored on Self-reliance and Indigenisation’.

The CNS reviewed the 'coastal security construct' and was satisfied with the steady progress made in strengthening the coastal security apparatus viz. induction of FICs, ISVs and NC3 I project. He asserted the need to remain ever vigilant and focussed towards our coastal security responsibilities, through proactive coordination with other maritime agencies and coastal states.

CNS highlighted that our foreign cooperation initiatives and engagements are growing considerably and past efforts have borne fruit in various forms. He appreciated the quick response of the ships and aircraft deployed towards SAR of ill-fated missing Malaysian Airlines jetliner MH 370.

During the course of the conference, the CNS reviewed progress of various infrastructure projects that are in pipeline and shall contribute towards futuristic capacity building. The need to adopt sustainable green technologies, re-cycling and waste management to reduce carbon footprint of our bases, in pursuance of the energy goals of our country were impressed upon by the CNS.

The Admiral also discussed about the utilisation of resources allocated to the Indian Navy. Ensuring that every rupee is stretched to the maximum and optimally utilised through adherence to cost consciousness, especially in the acquisition of spares, equipment and machinery, was stressed upon by the CNS.

Bringing the focus on Human Resource Development and Management, the CNS stated that our men and women are our greatest assets and their morale and well-being should always remain a primary concern. The need to attract and retain quality manpower by focusing on measures to provide a high quality of life at all stages of their career was also discussed. CNS also applauded the contribution of civilian personnel, who form a large component of naval human resources. He reiterated his vision to run a taut, effective and happy Navy.

One of the highlights of the conference was the opportunity naval commanders' had to interact with the MoD officials and the other service chiefs. General Bikram Singh, COAS and Air Chief Marshal Arup Raha, CAS also addressed the naval top brass and discussed with them issues pertaining to joint operations and military synergy.

The CNS concluded the conference by complimenting all personnel of the Indian Navy for their professionalism and patriotism, and exhorted them to prepare themselves and the Navy to meet the maritime security challenges being faced by the nation. “We need to pull on the oars together to propel the Navy to greater heights”, he said.

WTF, is he hugging himself? Is he out of his league? jackass.