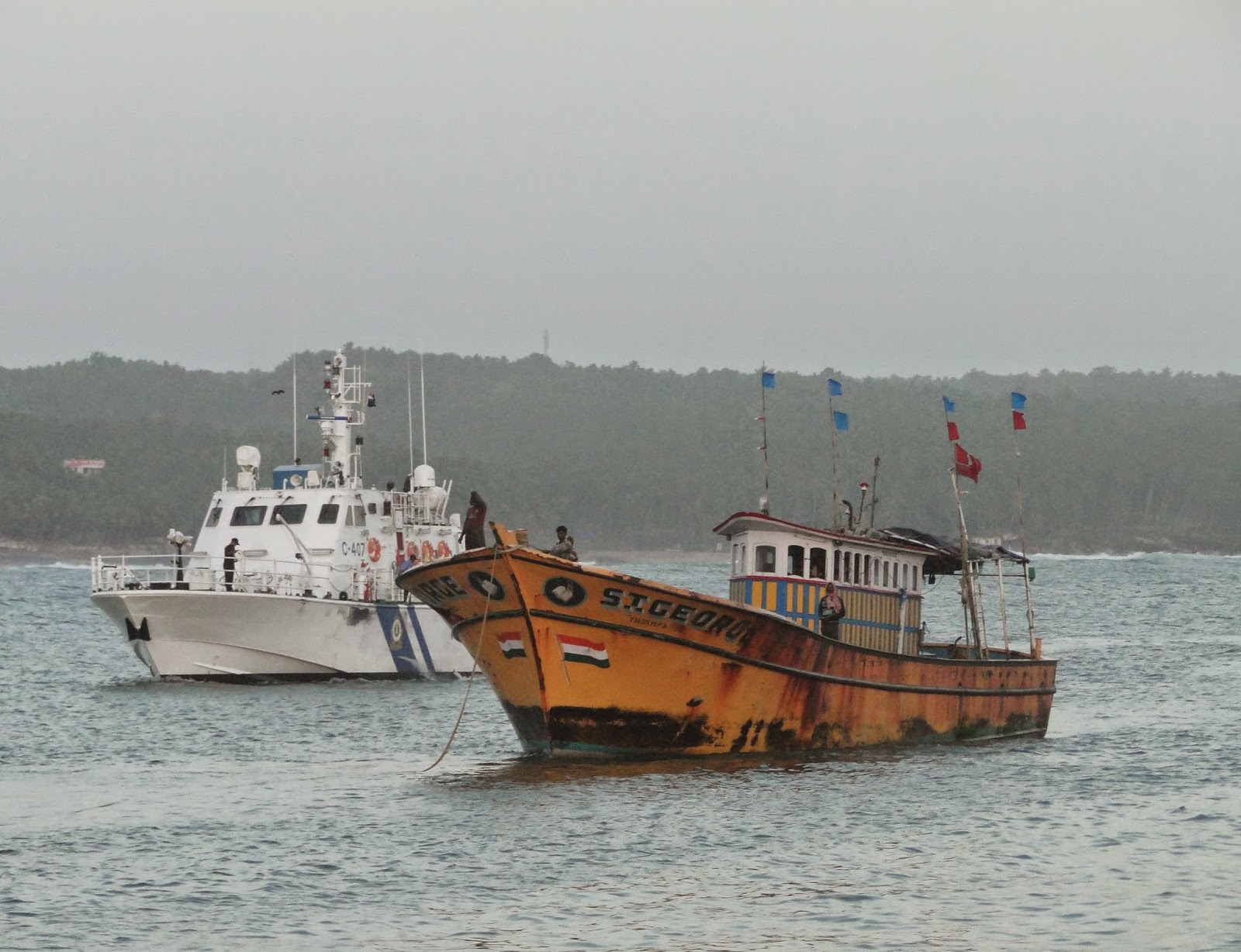 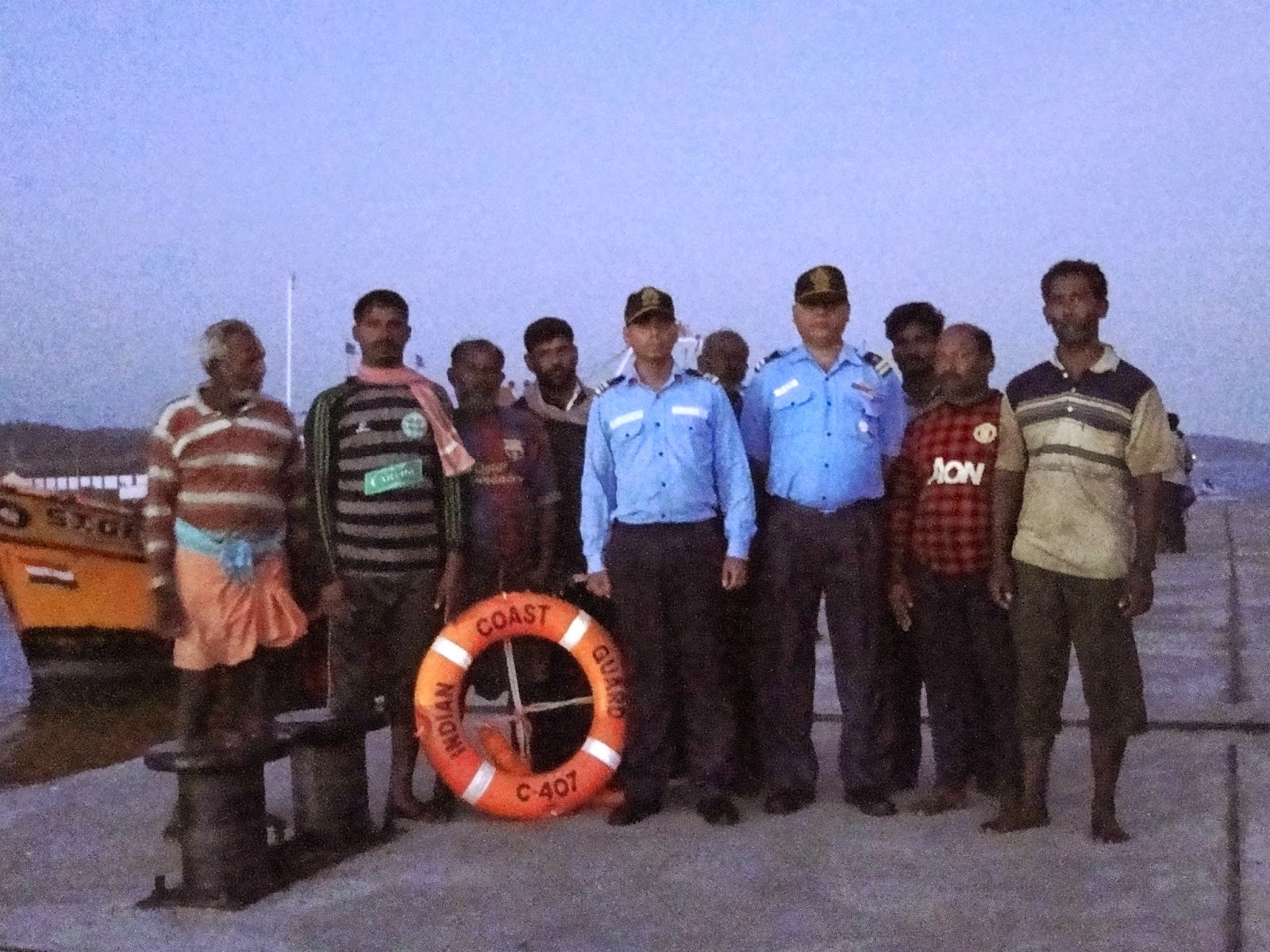 In the wee hours of 15 Jun 14, a distress signal was received by Coast Guard Station Vizhinjam regarding a stranded fishing trawler FV St George(Regn No TN 15 MFB732) with nine fisherman approximately 47 NM off Vizhinjam from MRCC, Mumbai. At about 0715 hrs, the newly commissioned interceptor boat of Indian Coast Guard, ICGS C-407 sailed out for rendering assistance to the trawler in distress. Overcoming the heavy swell and strong winds, C-407 rendezvoused the vessel in distress at around 1030 hrs approx 47 nm away from the Vizhinjam. Detailed investigation by the Coast Guard personnel revealed that the vessel under Tamilnadu Registration, sailed out form Colachal Harbour on the 04th this month. The vessel was adrift since 06 June 2014 following engine failure due to a shaft malfunction. In spite of their best efforts, the engine failure couldn’t be rectified at sea due to the rough weather conditions, Mr Johnson, Master of the vessel said. The vessel had 09 fishermen onboard including the master and is owned by Mr Robinson, St Thomas Nagar, Thoothoor, Kanyakumari, Tamilnadu. Further, communication sets of the vessel also malfunctioned leading to difficulty in communication.

Following rendezvous, the highly trained and competent personnel of the Indian Coast Guard undertook the daunting task of rescuing the vessel in distress by towing the vessel back to harbour. Towing operation for taking it towards the safe shelter commenced at around 1100 hrs.

FV was towed continuously for almost 10 hrs despite inclement weather conditions. Further, the vessel was brought alongside the harbour and was handed over to Asst Director, Fisheries, Dept of Fisheries, Thiruvanathapuram at around 1830 hrs. “The conditions at sea were not conducive for towing operations and the mission was successfully accomplished due to competence and hardwork of the personnel onboard” said the Commanding Officer of the Ship, Dy Commandant Deep Chandra Mathpal. Station Commander of Indian Coast Guard, Vizhinjam, Commandant Athinarayanan, who was continuously monitoring the progress of the mission since morning said that the newly commissioned vessel has given a cutting edge to the Coast Guard in providing humanitarian assistance in times of need. He added that C - 407 undertook the challenging and herculean task despite forecast on inclement weather conditions prevailing along the Kerala coast. ICGS-407 has been recently commissioned on 30 May 2014 by Shri KS Balasubramanian, Diector General Of Police, Kerala during an impressive ceremony at Vizhinjam

With the onset of monsoons, fishing ban has already been imposed across the Kerala Coast wef 15 Jun 2014. Adequate warnings and notices regarding safety at sea during monsoons have already being issued from time to time by the Fisheries department, added Mr Sreekandan, Additional Director, Department of Fisheries, Thiruvanathapuram.