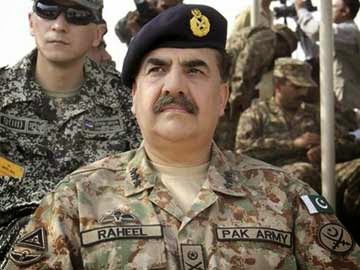 
Reiterating commitment to strengthening of democracy and upholding the supremacy of constitution, Chief of Army Staff General Raheel Sharif has said that Armed Forces drive their strength from the people and they would never hesitate from giving any sacrifice for safeguarding the ideological and territorial integrity of the motherland.
Addressing a function organised in connection with fifth Youm-i-Shohada to pay homage to the martyrs in Rawalpindi on Wednesday night, the army chief was all praise to responsible media, which he said had always played a positive role in moulding the public opinion on issues of national importance.

Addressing the gathering comprising the families of martyrs, high ranking civil and military officers, diplomats and people from different walks of life, Gen Raheel said that country is passing from a critical phase wherein all the state institutions are required to work in full harmony with all their strength.

In his first public speech since he became the army chief in November last year, he said, “Pakistan Army supports all efforts to eliminate terrorism and restore peace in the country, and it is our earnest desire that all elements fighting against the state should unconditionally submit to the country’s constitution and law and come back to the national mainstream,” warning that otherwise the military “with the support of people will take them to task”.

General Raheel said that ‘democracy is the only way forward’ to join developed nations of the world. Defence Minister Kh Mohammad Asif and Information Minister Pervez Rashid were conspicuous by their presence in the event and were sitting in the front row. And, General Raheel’s carefully worded speech indicated that tensions between the civil and military leadership had defused.

The COAS praised the people for standing by the forces in all difficult times and said that the relation between the Army and the people will be further strengthened in the days to come. However, he made it clear that there was no room for any doubt about ‘our ability to deal with’ insurgents. “The brave people of Pakistan and the army has the full capacity to take such elements to task,” he stressed.

The army chief also spoke of the development work undertaken by the military in the restive Balochistan. He said the Army belongs to whole of the country, and it is the key for the national unity, symbol of nationalism and guarantor of the defence of the country.”The induction of over 20,000 officers and soldiers in the Pakistan Army from Balochistan is a testament to the province’s trust in the military.”

He termed Kashmir a ‘jugular vein’ of Pakistan and called for resolution of the issue as per the UN resolutions and in line of the aspirations of the Kashmir people. He made it clear that without resolving the core issue between the two neighbours, permanent peace in the region could not be achieved. “Sacrifices of Kashmiris will not go in vein. Pakistan Army is in favour of peace but is always ready to respond to any aggression in befitting manner.”