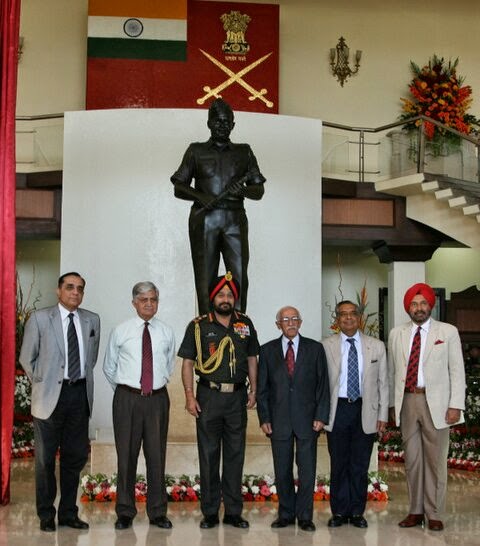 03 Apr 2014, marks the birth centenary of Field Marshal SHFJ Manekshaw, MC, one of the most illustrious Generals of the Indian Army.  Popularly called, ‘Sam Bahadur,’ he was the epitome of soldiering and visionary military leadership.  He was a key architect of our glorious military victory over Pakistan in the 1971 War,which led to the birth of Bangladesh.

To honour the legendary General and inspiring leader, his ‘Statue’ was unveiled and a Book titled, ‘Field Marshal Sam Manekshaw – The Man and His Times’ was released on 03 Apr 2014, at the Manekshaw Centre, Delhi Cantt. The proceedings began with a welcome address by Lt Gen Rameshwar Yadav, Director General of Infantry. Addressing the august gathering he gave a brief expose on the career highlights of the Late Field Marshal which spanned more than four decades of active military service. The event was attended by Mrs Maja Daruwalla, daughter of the legendary leader, accompanied by her husband.

Gen Bikram Singh, the Chief of the Army Staff, unveiled the Field Marshal’s Statue and released the Book on his life and times. The Chief of the Army Staff also addressed a large audience which comprised of a number of retired Army Chiefs, senior serving officers and veterans as also siblings and close relatives of the Field Marshal. Dwelling upon the numerous examples of soldierly traits and visionary leadership skills which the Field Marshal epitomised, Gen Bikram Singh called upon the serving officers, especially from the younger generations, to draw inspiration from Field Marshal Manekshaw and commit themselves to seeking professional excellence, in service of the Nation.

As part of the ongoing centenary celebrations a number of events were organised at Ooty & Coonor, the place where he chose to spend his final days. A 14 km Marathon was organised from Ooty to Wellington today morning. A statue of Field Marshal Manekshaw was also unveiled at Wellington. In addition, a prayer meeting and wreath laying was organised at the Parsi-Zoroastrian Cemetery at Ooty.