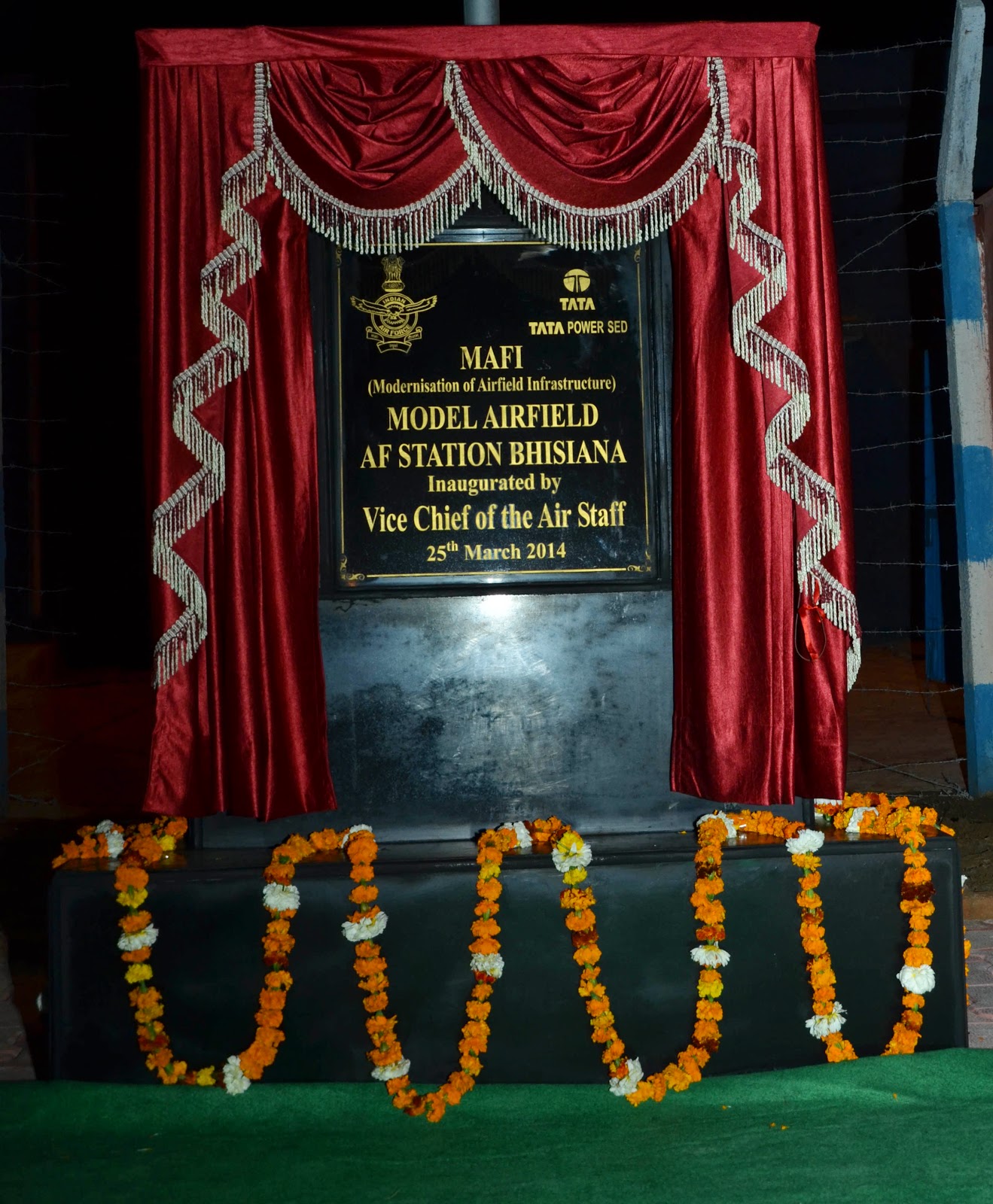 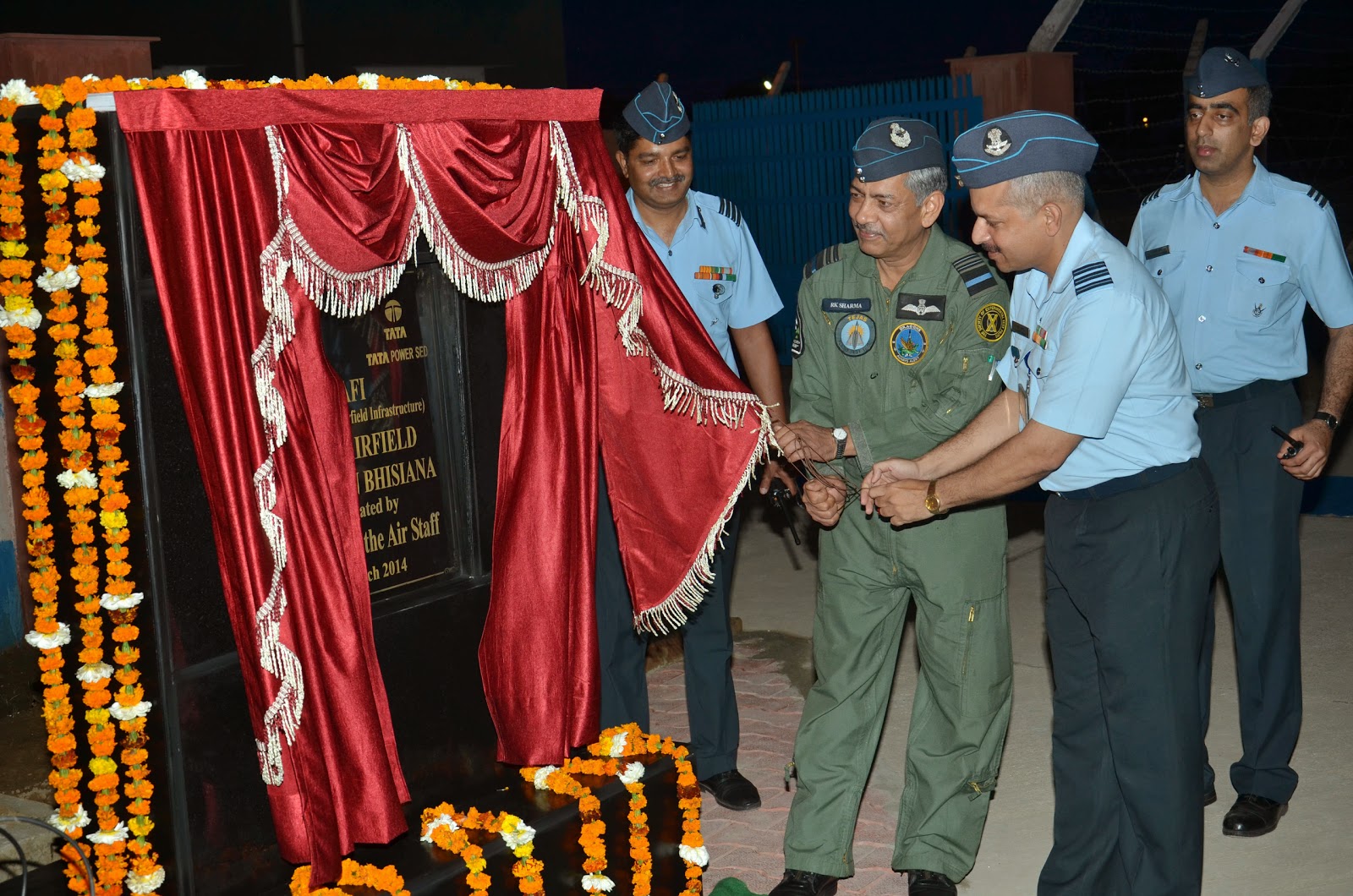 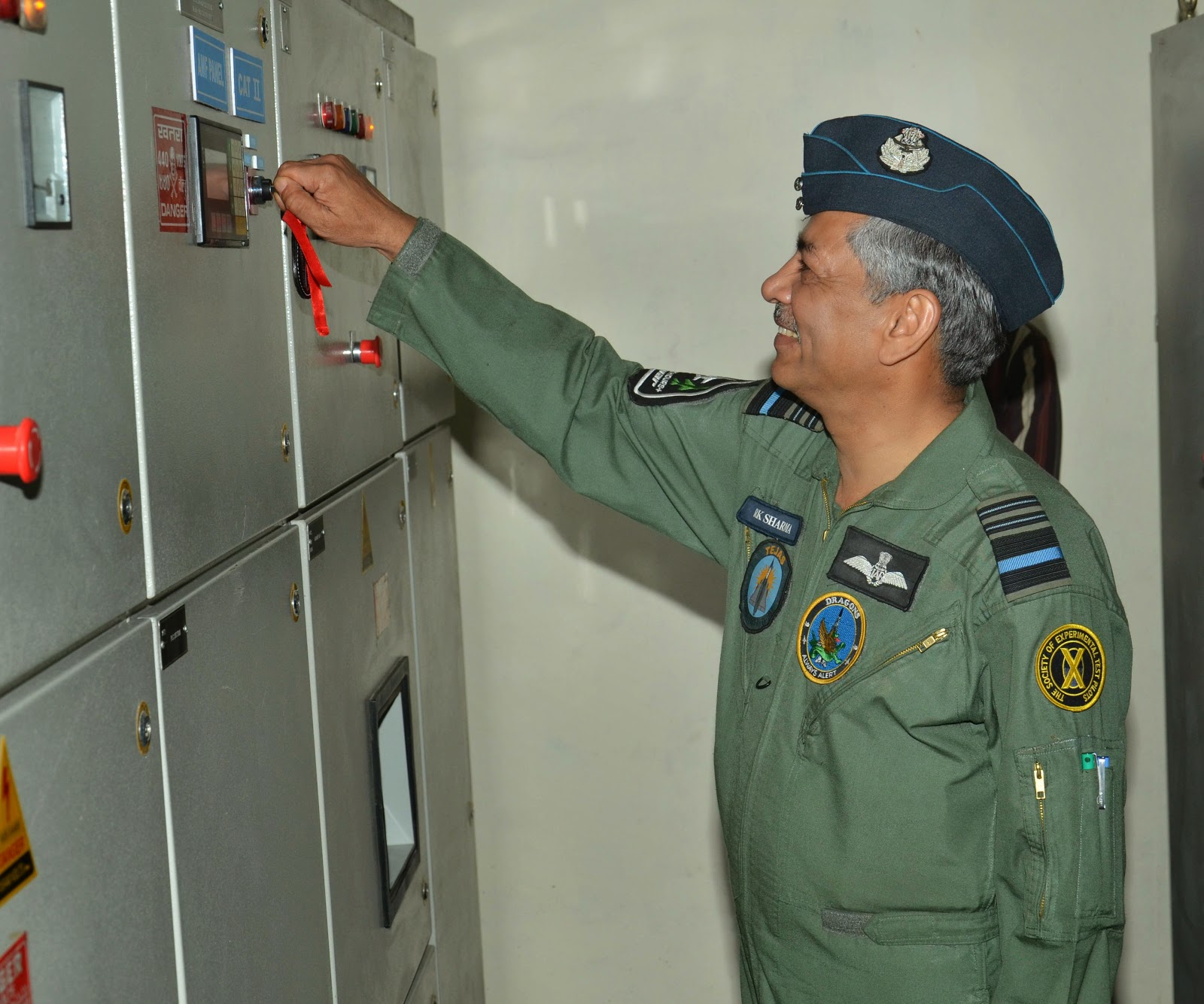 On Tuesday, 25 Mar 14, Pilot project for Modernisation of Airfield Infrastructure (MAFI) was commissioned at Air Force Station Bhisiana (Bhatinda) by Air Marshal RK Sharma PVSM AVSM VM ADC, Vice Chief of the Air Staff (VCAS). The formal Acceptance and commissioning of the MAFI pilot project at Model Base; Air Force Station Bhisiana, is a significant milestone in the much awaited and ambitious air-field infrastructure development project of the IAF, Navy and the  Coast Guard.

The pilot project is a part of the Indian Air Force’s ambitious 2,500 crore initiative to modernize all airfields of the IAF, Indian Navy and Coast Guard in a phased manner. Tata Power (Strategic Electronics Division) bagged the 1,220 crore contract signed in Mar 2011 to modernize thirty operationally important Indian Air Force airfields and install one DVOR/DME at Naval Base, Kochi in the Phase-I of the MAFI project. The remaining airfields of the IAF, Indian Navy, Coast Guard and ARC are included in the Phase-II of the project under the     'Option Clause'.
The Indian Air Force and Navy have seen induction of modern aviation platforms and up-gradation of their existing aircraft fleets at regular intervals in the past. Need was also felt to upgrade the navigational aids and associated airfield infrastructure commensurately. Also, AAI and civil airlines operating from IAF airfields have been demanding installation of the Instrument Landing System and other navigational aids to avoid cancellation of flights during poor weather conditions.
The MAFI project includes installation and integration of CAT II Instrument  Landing System (ILS), CAT II Air Field Lighting System, Automated Air Traffic    Management           System, Distance Measuring Equipments (High and Low Power),  Doppler VHF Omni-Directional Radio Range (DVOR), Tactical Air Navigation (TACAN) and associated                           infrastructure. In this project, all the navigational aids will be  of international standards meeting the ICAO specifications. The up-gradation of    navigational aids and infrastructure under the MAFI project would enhance the  operational capability by facilitating air operations of military and civil aircraft even in  poor visibility conditions/adverse weather while  enhancing Aerospace Safety.

The pilot project involved complex and extensive integration of various  navigational aids and other equipment, it was first executed at Air Force Station, Bhisiana, a premier airfield in the Western sector, selected as the 'Model Base’. From the experience gained while executing the pilot project and the design review, a template for the remaining airfields has now been crystallised. The navigational aids and other equipment installed have been thoroughly tested over a period of time by trials conducted by the IAF's fighter, transport and helicopter aircraft before the Acceptance Checks were completed and the Model base formally declared operational by the Vice Chief of the Air Staff (VCAS). The Commissioning of the MAFI project was marked by lighting up the runway with the new airfield lighting system and a Sukhoi-30 aircraft carrying out a DVOR/ILS approach. The VCAS, later piloted an Avro transport aircraft and carried out an ILS approach and overshoot by night. The MAFI project would now progress in phases to meet the geographical needs of the defence forces with a focus on joint user aerodromes that are used by civil aircraft as well. Addressing a gathering of senior officers from Operational Directorates of Air HQ and HQ Western Air Command, on the occasion, Air Marshal RK Sharma said, “MAFI project, by fulfilling the need to match ground infrastructure with capability of the modern aircraft, will enhance the overall capability of the India’s Air Power.”  “MAFI would substantially improve all – weather capability, aid the civil aircraft that operate from the joint – user aerodromes, enhance Aerospace safety and in the process aid growth of the aviation sector in the country.”