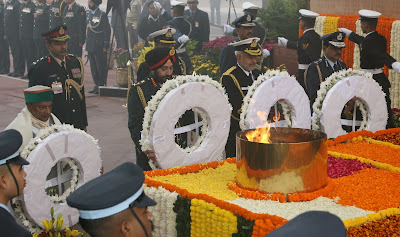 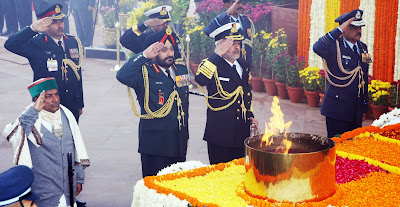 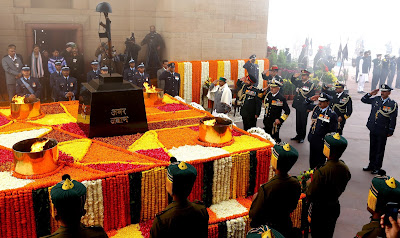 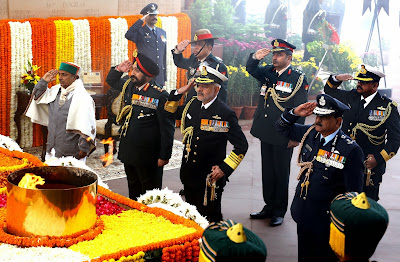 The Defence Minister Shri AK Antony and the three Service Chiefs paid homage at Amar Jawan Jyoti on the occasion of Vijay Diwas - 2013 here today.  Every year, this day is celebrated to commemorate the victory of Indian Armed Forces over Pakistan leading to the historic creation of Bangladesh.

The Chief of Air Staff Air Chief Marshal NAK Browne, Chief of Naval Staff Admiral DK Joshi and Chief of Army Staff General Bikram Singh laid the wreath along with the Defence Minister and paid tributes to the Martyrs who made the supreme sacrifice while fighting the enemy during the 1971 Operation.
As the bugles sounded the last post, two minutes’ silence was observed.

On the occasion, the Minister of State for Defence Shri Jitendra Singh and senior officials from all the three wings of Armed Forces and Ministry of Defence were present.

On December 16 every year, Citizens, officials, students & war veterans lay wreaths and remember the sacrifices of the soldiers. The anniversary of Vijay Divas is observed across the country by paying tributes to the martyrs.

Accounts of the freedom struggle behind the birth of Bangladesh as a nation after its erstwhile identity of East Pakistan was completely wiped off the world map was recounted by members of the Bangladeshi delegation of Mukti Jodhas, in Fort William, today.

December 16, 1971 remains a landmark day etched in the history of Bangladesh, a day that is also celebrated as 'Vijay Diwas' in India, commemorating victory of Indian Forces allied with Mukti Bahini, over Pakistani forces during the Bangladesh Liberation War in 1971.

A delegation of about 80 Mukti Jodhas including their families from Bangladesh are here in Kolkata to take part in Vijay Diwas-2013 celebrations. Indian War Veterans who had participated in the 1971 War are also here for the event, which is now an annual feature.

During an interactive session held at Fort William today, a day ahead of the Vijay Diwas, Mukti Jodhas from Bangladesh and Indian War Veterans recounted their experiences during the war. The event also afforded the opportunity to the veterans from both sides to come together and share their reminiscences of a war that they had fought shoulder to shoulder.

Col (Retd) Jafar Imam, Bir Bikram, team leader of Mukti Jodhas while recounting the events leading up to and during the 1971 war, thanked the Indian Government and HQ Eastern Command for having facilitated this opportunity to come together. Four speakers from Bangladesh rendered their experiences while three officers from Indian Army also spoke on the occasion.

Lt Gen Dalbir Singh, Eastern Army Commander earlier extended a very warm welcome to the entire delegation and thanked them for having accepted the invitation to join in the celebrations.

A memorial service for the martyrs of 1971 Bangladesh Liberation War will also be held tomorrow on December 16. After the ceremonial events, public homage will be open to all from 10.30 am.

Mukti Jodhas, Indian war veterans and serving officers of the army, navy and air force led by GOC-in-C, Eastern Command, Lt Gen Dalbir Singh came together on Monday at the Eastern Command War Memorial here in Kolkata, to pay homage to the martyrs of the Liberation War that heralded the birth of Bangladesh, 42 years to this day.

Although rich tributes are paid all across the nation, Vijay Diwas celebrations here in Eastern Command assume a special significance as mukti jodhas and Indian war veterans who fought together, reunite to celebrate this momentous occasion in history.

Former Governor of Punjab and Goa, Lt Gen JFR Jacob, 93, was the senior most veteran present, who besides having been the Chief of Staff (COS) in Eastern Command during the War also later became the army commander here. Six other former army commanders and a former army chief, Gen Shankar Roy Chowdhury placed wreaths at the memorial.

Earlier the sombre ceremony began with invocations by a Pastor, Maulvi, Granthi and a Hindu priest. Patriotic numbers played by the army band wafted across the 'temple of the martyrs' as buglers nestled up to sound the 'Last Post' and 'Rouse', the haunting scores on such solemn occasions from a rampart behind the magnificent edifice of the war memorial as the gathering of uniformed personnel, civilians, school children and NCC Cadets observed silence in paying homage.

Later, the gathering intermingled with each other greeting and celebrating the occasion. A traditional feast, Barakhana in military parlance, was also held in the garrison ground inside Fort William where the visiting delegation members were felicitated by Lt Gen Dalbir and Mrs Namita Suhag and mementoes exchanged.