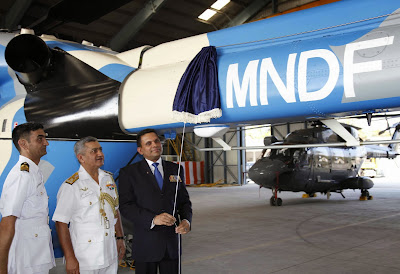 The Defence Minister of Maldives Mr Mohamed Nazim arrived at Kochi today on the second leg of his visit to India. The official visit, at the invitation of the Defence Minister of India, had commenced at New Delhi on 11th December. At Kochi, Mr Mohamed Nazim visited establishments of the Southern Naval Command, where personnel of the Maldives National Defence Force (MNDF) undergo training. An important itinerary of the Defence Minister’s programme was unveiling of aircraft frame marking of the Advanced Light Helicopter being prepared for Maldives. Speaking on the occasion, Mr Nazim said that India has always stood with Maldives at the time of need and especially mentioned the assistance in capacity building across the defence sector. Vice Admiral Satish Soni, Flag officer Commanding in Chief Southern Naval Command who presided over the function said that India considers Maldives a very important neighbor and brought out the fact that that Maldives has been an outstanding contributor towards enhancing the surveillance and security in the Indian Ocean region. MNDF ships routinely contributed to anti piracy patrols as a result of which the threat of piracy has receded he said.

Earlier on arrival at Kochi, Mr Mohamed Nazim was received at the Naval airport by Vice Admiral Satish Soni, and accorded a Guard of Honour. The Minister held discussions with the Admiral on training matters. Training facilities are offered to the Maldives National Defence Force (MNDF) personnel in Indian Naval training establishments since 1988. MNDF personnel have been availing on an average, 35 courses every year for the past few years. Other aspects of the collaborative partnership between the two Indian Ocean neighbours include among others material assistance, and surveillance assistance for the exclusive economic zone of Maldives. Senior Officials of the Ministry of External Affairs, Hindustan Aeronautics Limited, Indian Navy and trainees of MNDF at Southern Naval Command witnessed the event. Mr Mohamed Nazim will conclude his visit to India tomorrow.