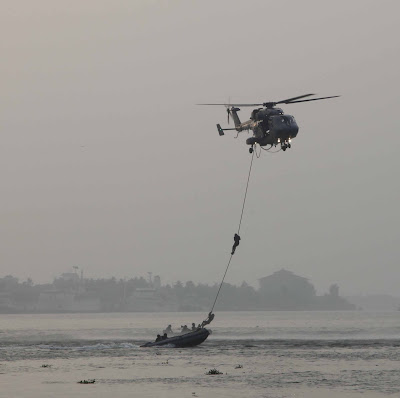 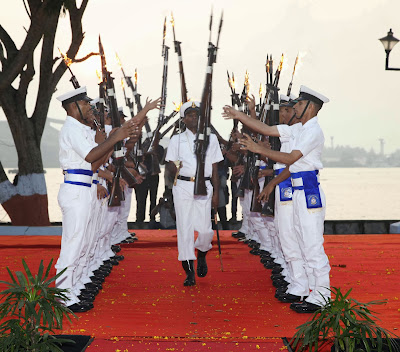 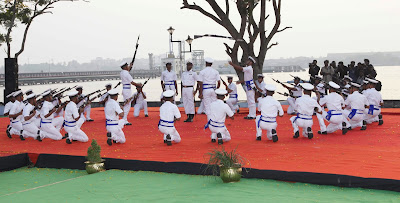 The Kochi back waters with thousands of residents watching from its shores, witnessed an awe inspiring demonstration of the range of Navy’s operational bandwidth today in the presence of Shri Nikhil Kumar, Honourable Governor of Kerala. The demonstration planned within the limitations imposed by aerial and water obstructions and depth of water in the area commenced with marine commandos delivering the programme schedule to the Honourable Governor. Thereafter, fly past by all aircraft of INS Garuda and the giant TU- 142 aircraft from Chennai was the harbinger of events to unfold in the next two hours.

Demonstration of landing of a seaking helicopter on a moving warship, firing of weapons, special operations by the marine commandos from air and water, simulation of VBSS (visit, board, search and seizure) operations, aerobatics by the Advanced Light Helicopters, were some of the operations demonstrated. The warship component was led by INS Teg, the stealth frigate -one of the newer platforms in the Naval inventory, and warships Sharda, Sujata, Sarvekshak, Kabra and Sagardhwani. Newly inducted Fast Interceptor Craft were also fielded to demonstrate its capabilities in coastal security and force protection.

The continuity drill performed by the sailors of INS Dronachrya stood out for its stunning and precise discipline and skills in weapon handling. The demonstration concluded with the ceremonial beating retreat performed by the Naval Band and the lowering of the National Flag and Naval Ensign at sunset. Five warships then sailed past the gathering with their silhouette illuminated. Vice Admiral Satish Soni, Flag Officer Commanding in Chief Southern Naval Command presided over the function conducted as part of Navy Day celebrations.