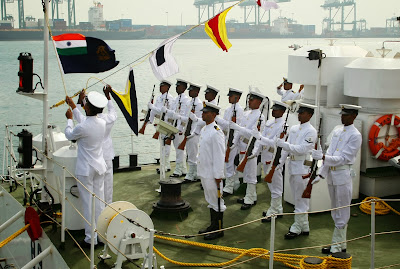 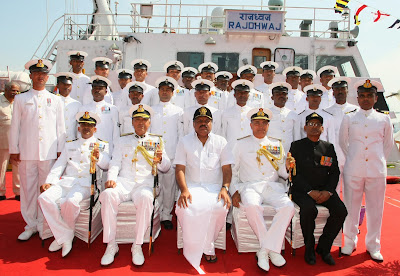 The IPV is equipped with the most advanced and sophisticated Navigational and communication sensors and equipment.  The ship is propelled to a maximum speed of 31.5 knots by three MTU 4000 series diesel engines of 2720 KW capacity at 2100 RPM each, coupled with three 7152 rolls Royce Kamewa Jets.  At economical speed of 14 knots, it has an endurance of 1500 nautical miles.  The special features of the ship include an integrated bridge system (IBS), integrated machinery control system (IMCS), and an indigenously built 30 MM Gun mount with fire control system.  The ship is designed to carry one Rigid Inflatable Boat (RIB) and two geminis for search and rescue, Law Enforcement and maritime patrol.

ICGS "RAJDWAJ", manned by 05 officers and 30 men under the command of commandant (JG) VK Parmar will be based at Kakinada under the administrative & operational control of the Commander Coast Guard District Headquarters No-06, Visakhapatnam.

The ship on joining the Coast Guard Fleet will enhance coast guard's capability in furthering its mandate of maritime safety & security, environmental protection and coastal security on the eastern sea board.