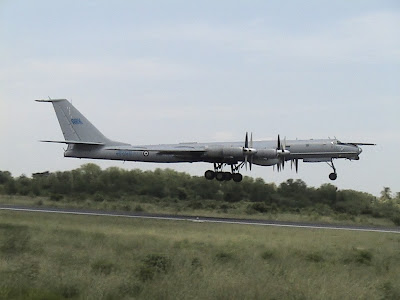 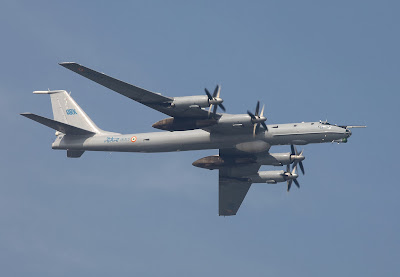 25 years ago on this day The Indian Navy's Long Range Maritime Reconnaissance and Anti -Submarine Warfare Role got it's first formidable weapon in the form of the Tu 142 M aircraft. One of the worlds fastest turbo prop aircraft the Tu 142 has been the mainstay of the Indian Navy's MR function after 25 years and with over 28000 hrs of flying the aircraft has been upgraded and life extended to remain effective even today.

The squadron is also inducting the Boeing P-8I, two aircraft have been received todate.

INAS 312 Maritime Reconnaissance Squadron of the Eastern Naval Command, based at Arakkonam in Tamil Nadu, celebrated its Silver Jubilee Anniversary on today, 18 Nov. The Silver Jubilee celebrations of operations of the TU 142M aircraft, with the moniker `Albatross' were-held at INS Rajali, a premier

Naval Air Station operating under the control of the Eastern Naval Command. The celebrations were kicked off with a Seminar on Maritime Operations held at INS Rajali on Sunday. Vice Admiral (Retd) Dilip Deshpande, PVSM, AVSM, VSM, himself a member of the Commissioning Crew, delivered the key note address at the Seminar.

Vice Admiral Anil Chopra, PVSM, AVSM, VSM, Flag Officer Commanding-in Chief, Eastern Naval Command was the Chief Guest at the Anniversary events that followed, that included a Cultural Evening and at the station reception held that evening, wherein he unveiled the Silver Jubilee Plaque to commemorate the event and also released a Coffee Table Book recounting the glorious journey of the Squadron.

Vice Admiral Chopra reviewed the Squadron personnel on parade today, 18 Nov and cut the customary Anniversary cake. A special day postal cover was also released on this occasion by the Commander-in-Chief, in the presence of Post Master General of Chennai, Shri Mervin Alexander. This was followed by a Fly-past in which aircraft from both the Eastern and Western Naval Commands, comprising Chetak helicopters, Dornier, IL38 SD, P8I and the TU 142 M took part.

Though originally commissioned on this day in 1976 with the Super Constellation aircraft, the Squadron was re-commissioned with the Tupolov 142 M aircraft, in 1988, by the then Defence Minister, late Shri KC Pant. Through the years the `Albatross' has rendered yeoman service to the Nation, keeping up with modern developments and advancements in avionics and role equipment, through several retro-fitments/ modifications; the `Mighty Bird' remains an effective Force Multiplier for the Indian Navy and at the forefront of all maritime operations, taking part in all major naval exercises and operations since its induction into Service. As an acknowledgment of this unflinching contribution, the Squadron was awarded a `Unit Citation', `Best Frontline Squadron' Trophy twice, the `CNS Flight Safety' Trophy for four times, and was runners up for the `Best Frontline Squadron' twice. Over the last 25 years of operations, the Squadron has flown over 28,000 hours of incident and accident free flying on the TU 142 M aircraft. The Squadron is presently commanded by Commander P Mahesh Raju, an alumnus of the Rashtriya Indian Military College and National Defence Academy.