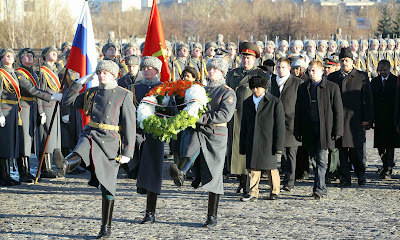 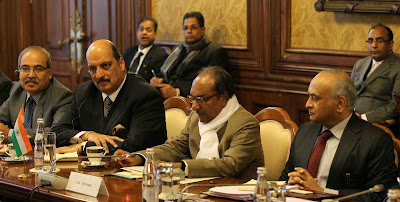 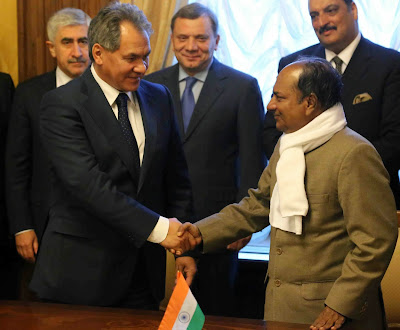 Meeting just two days after the successful commissioning of the much-awaited aircraft carrier INS Vikramaditya into the Indian Navy, India and Russia today agreed to expand the range of their strategic partnership in a significant manner at the 13th Meeting of the India – Russia Inter-Governmental Commission on Military Technical Cooperation (IRIGC-MTC)  which was co- chaired by the Defence Minister Shri AK Antony with his Russian counterpart Mr Sergey Shoigu in Moscow.

The meeting held in an atmosphere of cordiality and warmth, decided that the two countries will hold joint Air Force level exercise for the first time besides a joint Navy Exercise in the Peter the Great Bay in the Sea of Japan, both in 2014. It may be recalled that the Armies of the two countries had recently held Exercise Indra in Rajasthan recently and the focus was on anti-terrorism. The two Ministers agreed that there is a need for further cooperation at all levels, especially in view of the regional and global challenges and to fight the menace of terrorism jointly. Both sides reviewed the situation in West Asia, especially in Syria and the evolving paradigm in Afghanistan.

In order to give a new impetus to the relationship which has gathered momentum over the years, the two sides agreed that the time has come to expand the cooperation not only in product design and development, which has made significant progress over the years but also to involve various echelons of the Defence establishments  in strategising policies and cooperation in the fast changing global security scenario.

Referring to Fifth Generation Fighter Aircraft(FGFA) and Multi-role Transport Aircraft (MTA), Shri Antony said, the two projects are significant because they symbolise  going-past the relationship of buyer- seller. He said both sides must give their best at all phases of the execution of these two projects- design, development and production.

Mr Shoigu assured that the Naval Aviation specialists will train Indian pilots fully for take- offs and landing on INS Vikramaditya and in all probability it will be held in Goa.
The Meeting also reviewed issues relating to T-90 tanks and SU-30 projects.

On the issue of after sales support, both sides felt that they should sign long-term maintenance support agreement.

Earlier in the morning, Shri Antony and the members of the Indian delegation drove down to Poklonnaya Gora (Bow-Down Hill) at Victory Park and laid a wreath at the World War-II Memorial. He was also presented a ceremonial  guard of honour.