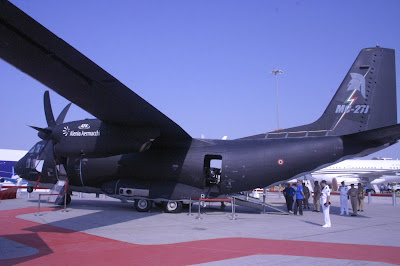 Alenia Aermacchi and Italian Air Force sign an agreement to provide development and industrialization of MC-27J Praetorian Alenia Aermacchi (a Finmeccanica Company) and the Aeronautica Militare (Italian Air Force) signed today, during the Dubai Airshow 2013, an agreement to provide development, testing, certification, industrialization and logistic support of the Praetorian. The Praetorian, a specialized version of the MC-27J, will support missions for the Italian Special Forces, Comando Operativo Forze Speciali (COFS).

The Italian Air Force plan to transform three C-27J’s, currently in service, into the Praetorian configuration during 2016 and will include mission systems, C3ISR equipment and palletized support / fire systems. An additional three aircraft will also have the same mission package capabilities.

Alenia Aermacchi, in partnership with US based ATK, will develop the Praetorian mission and air-to-ground support systems. Selex ES, a Finmeccanica Company, will partner with Alenia Aermacchi for the communication and data link equipment.

The MC-27J is an advanced defense system jointly developed by Alenia Aermacchi and ATK. The MC-27J is based on the C-27J, the most state-of-the-art twin-engine turboprop tactical transport aircraft currently available on the market providing unequalled performance. The ability to accommodate NATO standard pallets allows a wide range of palletized roll-on/roll-off solutions increasing the effectiveness of its tactical and strategic mission capabilities at lower costs, benefitting the Comando Operativo Forze Speciali (COFS) particularly strict operating  requirements.

18 November 2013, Dubai – On the ground of Dubai Airshow 2013 Sberbank, Sukhoi Civil Aircraft (SCAC) and Abu Dhabi Investment Company “Invest AD” signed a tri-lateral Letter of Intent to launch their cooperation in the Middle East in marketing and promotion of Sukhoi Superjet 100 in its basic and long range modification.

As an outcome of the signing ceremony, Alexander Dementiev as Global head of Financial Institutions at Sberbank, stated: “In the light of the recently adopted Sberbank Development Strategy for 2014-2018 we aim at becoming a global partner for our clients. Sukhoi Civil Aircraft Company is a leader of the Russian aviation industry and one of Sberbank’s key clients. We are ready to support its interests at any spot in the world. Together with Invest AD as our strategic partner in the Middle East and Africa, we will support and help Sukhoi Civil Aircraft Company and the Russian Federation in promoting the Russian aviation industry production in this strategically important region of the globe.”

Andrey Kalinovsky, SCAC President noted: “Currently, the Middle East is one of the priority markets for SSJ100. In this regard, today we signed the Letter of Intent in order to optimize funding proposals related to purchase of our aircraft by new customers in this, promising for the Sukhoi Superjet 100 project, region”. 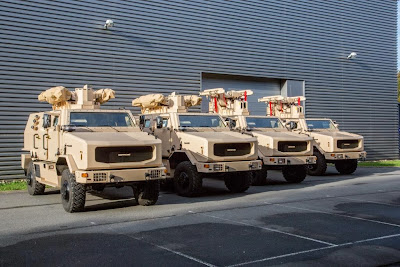 17.11.2013. Bourges, France : MBDA has just completed the integration and factory acceptance test of the first Multi-Purpose Combat Vehicle (MPCV) vehicles designed to operate the Mistral surface to air missile. Built for export, these vehicles represent the first production batch. In the next few days, they will be shipped for delivery to the customer country before the end of the year, as announced at the contract signing in February 2011.

In parallel, MBDA is completing the installation of a final assembly line in the customer country so that the customer will be able to carry out the final integration of its own combat vehicles using MBDA provided MPCV kits.  In Bourges, MBDA personnel have also trained the customer’s technical staff during the integration of the first MPCV’s.

On the occasion of the delivery, Antoine Bouvier, CEO of MBDA, said: “With the MPCV program, MBDA once again demonstrates its mastery of the architecture of air defence systems. Self-funded by MBDA, the MPCV was developed in four years. It then took less than three years after the signing of the first contract to integrate the systems on a vehicle chosen by the end customer, deliver at the agreed date and implement a technology transfer under which the customer will be able, in complete autonomy, to keep its equipment in operational condition.”