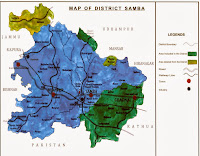 As narrated by an Infantry officer :


It has been a great lapse on the part of BSF & JK Police & Lt Col Bikram & other's of 16Cav got caught too & paid with their lives.

Around 0600hrs these 3 guys after infiltrating hijacked a Load carrier Auto in Hariya Chak village just 2kms near the border, which was being loaded with vegetables; & asked to be taken to any nearby Army/Police camp.

The auto guy showing great presence of mind took these guys from the longer route 15km instead of direct route (6km) to Hiranagar town. Two of these guys sat at the back & covered themselves with the plastic sheet & one sat with the driver.

On the way they came 2 a CRPF camp but as the sentry & other guards were at their posts fully armed & alert these guys asked the driver to drive on. They came on the NH1A & drove through 2 police nakas, the auto guy blasted his horn at these places hoping to alert police & public but was not stopped by any policeman.

Finally he had to drive the Hiranagar PS & reached around 0635hr.Just near the PS gate the driver rammed his auto into a pole & tried to run away. That's the time he was fired upon & luckily he only got wounded in the legs & chest. Nearby a shopkeeper was opening his shop & he was hit & he died. The militants just left these guys & charged into the PS firing & throwing grenades. The cops were caught literally with their pants down & were massacred. The sentry did manage to fire some shots & one cop from the rooftop did manage to hit them with a brick.

The militants climbed on the roof of the PS & shouted slogans of Pakistan Zindabad etc.They came down & caught hold of the Truck cleaner, truck was seized nite before only; but this guy refused & was shot dead. In the mean time the driver of the truck entered the PS to see what was happening & these guys asked him to take them 2 Samba. While leaving the PS they shot at the Shivling in the temple next to the gate.

These guys kept raising Pakistan slogans & reached Samba 16Cav loc around 0745hr.Here they immdtly dismounted & rushed to the gate shooting the sentry before he could react & entered the area. Incidentally the army School is ahead of this loc but away from the highway.

Rest is now history & we are very lucky not to loose more Offrs & families. Unfortunately the Offr Mess & Offr accd is right next to this gate which also happnd to be first gate in the direction of Hiranagar from where these guys were coming. My regt was at same loc some years back so know the layout well.

The worst thing is that between 0635 & 0745hrs no alert was sounded to the District Admin or HQ Unified Command. It was only 16Cav sending a signal to Western Command & the news travelled to Northern Command & Corps HQ & down & also the civil admn.

Secondly even after the first shot was fired no alert whatsoever was sounded for more than an hour; leading to the unnecessary loss of lives.

Thirdly there was no one manning the police Nakkas between the IB - NH1 - Hiranagar - Samba, approx 5nos. We were told that all these Nakkas were only used as money generating points.

Fourthly lack of manpower. Hiranagar PS should have a strength of 80 constables but what they have only 20! So how these guys would be able to do their duties effectively is a matter of concern.

Fifthly as it is IB in this area the BSF should have patrolled & taken steps especially at the places where the fencing was damaged in the recent monsoon; to prevent any infiltration. They too hv slept on their job resulting in such a catastrophe.

Seventhly it is most surprising in entire Samba area its on 16Cav loc that has not been walled & still has a single fencing, the same old one; thus making it much vulnerable.

At the end of the day its each & every individual at all levels who has to perform his duty to ensure we succeed against the onslaught against our nation.

Of two of the SPO's killed, one was the only brother of 5 sister's & his father is an ex-serviceman who later also served in JK Police. He like Col Bikram has a 6yr daughter.

The other SPO, had been recently appointed was unmarried whose father had died at an early age.The shopkeeper to has a daughter of 5yr but has his father & brother who can look after his widow.

The other policemen were older & had generally settled their children & married their daughters.

My only take on this episode is that since the last 14yrs the BSF & JK Police had become very complacent & lax in their duties, coupled with Omar's strident demand for revoking AFSPA from Kathua & Jammu. Even the Civil admn was sleeping. My sympathies with bereaved families.

As per initial inputs, the 3 militants came to the No1 Gate, which was closed and shouted curses at DKK Reddy, who shouted back at them. They shot him through the bunker window, before he could ract with his weapon - he thought they were a neighbouring unit men. They went to the rear of the Mess where Inder singh was having a bath and tossed a grenade into the bathroom. One it appears circled the far side of the mess and 2 went back to the road and started mov forward, when accosted by MS Rao, who was shot dead. BJ Singh, thinking it was one of our soldier running amok, came running out of his house shouting at the soldier to desist - little realising it was a militant attack- they were in fatigues. All three were together and he got the burst of all three. This gave toime to CO and one of the guards, by now both armed to accost them with fire. The militants sprayed bullets and went into the first bldg in front - the guest room complex. The CO got hit, left elbow and chest, but despite the injureis, took position and shouted for his brave 'Tambis', who reacted swiftly and surrounded the bldg. But for this the casualties could have been more, as this was the offrs family complex and children were leaving for school!!!

Then came the tanks. One of the offrs wife was trapped upstairs, either Mukul's or Balwas's wife - will confirm. She was brought even as the militants tried to rush up to take her hostage. The brave 'Tambis' then let them have it, even fired 2 x HE rounds, which I am certain lead to the death of atleast one if not two militants.

By now the QRTs of the 2 x units across the road also came and strengthened the cordon.The finally 9 SF was also brought in. All three militants were killed.

The incident has been narrated by an Infantry officer posted

Its seems that the security agencies will never learn their lessons. All vehicles coming from border districts should be thoroughly checked at the various checkposts to avoid such incidents. Otherwise what is the use of AFSPA. Also the coastal security in Mumbai after 26/11 is same & is waiting for another attack to happen.

What a fool of a nation is India! We should send our "militants" into Pak to annihilate their officers and especially their Jihadi leadership. Send a couple commandos on suicide missin with sniper rifle and eliminate the LeT chief when he is giving public speeches against India. Can't we even do this? If no, then shame on India and Indian forces. The commandos should be told they are "non-state actors" if caught.