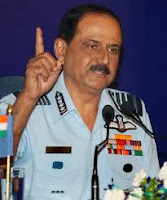 Just before his retirement Air Chief NAK Browne's name again crops up in a procurement controversy -- the 1.4 billion dollar deal for the 22 attack helicopters for which last year the AH-64D Apache Block III from Boeing was selected as the winner of the Indian Air Force’s (IAF) requirement. Also from Boeing is its CH-47 Chinook is in the running for 15 heavy-lift helicopters for the IAF. To a question on whether specifications in the Chinook tender tampered with, Browne said recently in his press conference that, "All ok and on track, have no cause for concern. Such stories are fed by competitors who must've lost the contract."

But specifications in the Apache deal seem to have been tampered with, allegedly, as this anonymous letter to MoD shows. This is the second deal in which Air Chief's name shows up, after the VVIP choppergate .

The letter talks about cockpit configuration in the RFP, which was floated in 2009, being changed from  conventional 'twin cockpit' to tandem cockpit.

The letter is as follows  , in which the writer of the letter has demanded MoD to look into the complaint and study the ASQR and the trial directive on file, carefully. 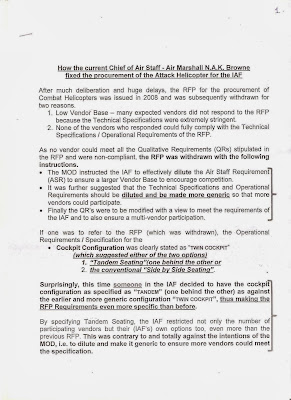 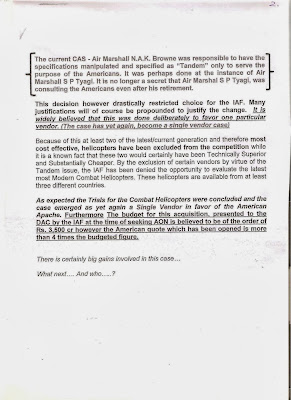 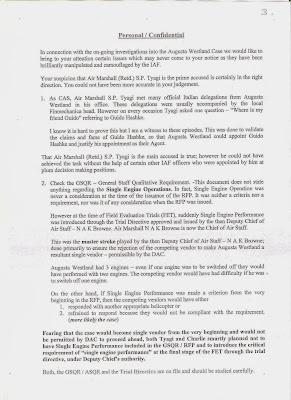 Post retirement most of these senior officers, especially 3-star and 4-star types , join arms companies as consultants, dont know what consultancy do they provide? After so many of them already on the rolls--read my friend Ajmer Singh's story on the subject , I wont be surprised if we find Chief NAK Browne as a Boeing consultant, in a few months !!!

the noise about tandem cockpit is a needless one, any one with a slight knowledge about attack helicopters would tell you that in order to present a low frontal profile one has to have seating one behind the other, and one can see it in all major attack helicopters which are specifically built as attack helis.
-Raj