What Makes China A Super Power : My First Person Account !! 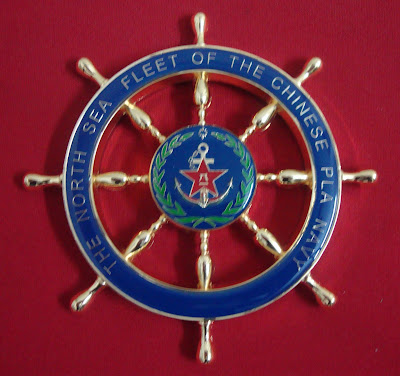 Must say I always wanted to visit China atleast once, and my wish was granted, though it came in the midst of a personal tragedy. But I still wanted to make the most of this trip as it was special in many ways. it had a sizeable military component in it, which was of my interest, and also because I was specially chosen for this trip, by my hosts, based on my previous work on China....here it is and here .

Considered enemy countries, I was always keen on visiting China and Pakistan, latter I had visited last year and this year I got a chance to be in China for eight days, in Beijing and Qingdao.

After a glimpse of the mighty Great Wall,  as we landed, we were whisked from the airport itself to the Great Wall, I began my trip, wide-eyed looking around. Owing to my personal tragedy I was extremely unwell , with my nervous system almost drained out and on every outing of mine in Beijing, I looked around for a chemist, local doctor, small clinic etc by the roadside, the way I am so used to here in India, but all I could see there were Banks and only Banks, all kinds of them, with strange names. Huge swanky banks all around, made me wonder who were the customers here!! With names like 'Evergreen Bank', 'Grow with Us Bank' , Bank of Beijing etc, all I could see around was flashy world-class infrastructure. Even a visit to the women's international readymade apparel store-Zara, left me wondering, as the price there was less than what I pay in south Delhi Select City Walk mall-based Zara. I asked a colleague of mine about the price difference,  who replied,"Export/import duty naam ki bhi koi cheez hoti hai." I couldn't quite understand what that is, but just pretended that I understood and smiled at her, not willing to extend the discussion.

My first stop was at Academy Of Military Science : Chinese think-tank, headed by a serving Major General. Top research institute of the PLA, controlled by the Central Military Commission (CMC) of China. The recently issued White Paper on China's armed forces is the brainchild of Academy of Military Science. The White Paper talks of PLA's defence policy, strategy, diversified employment in which the Chinese armed forces personnel are engaged in, China's GDP, self defence etc.

Ministry Of External Affairs Of The Ministry Of Defence : Yes you read that right. The defence ministry of China has its own external affairs wing, totally autonomous from the political one. China's national defence policy is defensive in nature, but to develop "We need a peaceful international environment", is their motto.

Ministry Of Foreign Affairs, China : This is seperate from the one above . About the Ladakh incursion, all they had to say was "We have to try and avoid such incidents."

4th Army Aviation Regiment : One hour drive from Beijing, this regiment boasted of its attack chopper Z-9WZ. This regiment is dubbed 'Heroic team regiment' for its work in disaster relief ops. It has fixed wing and attack choppers besides reguler surveillance, logistic and troop movement choppers. Basically its a mobile regiment--read RRF !!

PLA Daily : Daily  newspaper in Mandarin with a circulation of 5,00,000 (so they claimed), invites articles from within the services. Has a full-fledged editing department. Officers and men can submit articles even if they are complaints and grievances.

Qingdao :   The train ride from Beijing to Qingdao covering 12 hrs in 4 hours in the super fast train, was worth an experience.  Port city with a population of 8 million. The small and relatively quiet coastal city was more of a holiday destination. Visit to the office of Qingdao Daily, which was on the main road facing the sea, made most of us  think of taking up a job in it, because of its location.

The office of Qingdao Daily was like that of a 5-star hotel, huge and swanky, with a banquet hall, down below.

North Sea Fleet Headquarters :  The NSF came into existence in 1960. Breifing at the headquarters was about their submarines, strategy, aircraft carrier, naval air wing, threats and percieved threats and joint exercises.

Elaborate breifing about the new frigate Weifang and a walk-through visit onboard made my day. It reminded me of my first visit to our own home-made INS Shivalik, Weifang's counterpart here.

Deputy Chief of Staff North Sea Fleet Rear Admiral Wang Lin presented me a ship rudder-steering wheel, as a momento for my late father (who was also a naval officer).

The clean and spanky Weifang was just waiting for us to set foot. I examined the systems on the bridge but I was not allowed to take pictures. The 6 mm gun was quite similar to what we have. Somehow I found our ships better. Sun Tzu's large photo in the gangway, while walking inside the ship, caught my attention.

Wang Lin said that their aircraft carrier would take long to become functionally deployable, and that India was ahead of them in this area. Lin paid respect and tribute to my late father.

The PLA and the PLA-Navy officers were all happy to learn that I've been an ex-instructor in the Indian Military Academy and come from a services background.

Mostly the NSF officers stressed on the Japanese threat. About the future,  NSF would undergo a lot of modernisation by 2020 , mainly in areas of communication and electronics.

Is there a hint there?

Anyway I wrapped up a great educative trip, but came back even more unwell, compared to when I reached there, after having lost about 5 kilos of weight due to lack of  anything to eat and having survived just on cucumbers, boiled potatoes and coffee, for 8 days !!

Email ThisBlogThis!Share to TwitterShare to FacebookShare to Pinterest
Labels: China

Nice update & really commendable article. Its a great privilege to tour the most prestigious institutions in China. In near future China is surely going to dominate the entire Asia-Pacific region & it will be a herculean task for US and her allies to keep the lone China at bay. If some blunder happens in Arunachal the one who will be responsible is India. The words like preparedness,responsibility,diplomacy are missing in Indian constitution.

Lastly, after a hurricane tour in the land of noodles, now just hang out in some Indian restaurants for regaining the lost appetite.:-)