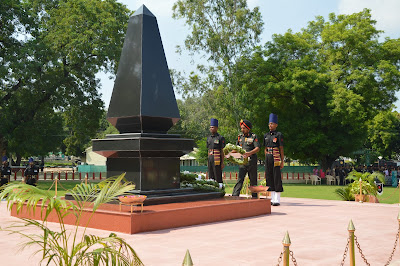 It is a proud day for Indian Army as well as the nation as its oldest fighting formation, the 4 Infantry Division, also known as the Red Eagle Division, celebrates its 75th anniversary, the Platinum Jubilee on Saturday. The occasion was graced by a number of military dignitaries to include Lieutenant General Ravi Thodge, AVSM, SM, VSM, GOC STRIKE ONE, along with a number of previous commanders of the Division, both serving and retired. The celebrations formally started with remembering the brave soldiers of the Division who made the supreme sacrifice for the nation, at the war memorial. Smt Rasulan Bibi wife of CQMH Abdul Hamid, Param Vir Chakra (posthumously) who was present on the occasion was felicitated by the Division and she also paid floral tribute to the martyrs.

The General Officer Commanding of the Division, Major General Surinder Singh, VSM laid a wreath at the war memorial and paid homage to the brave soldiers of the Division in the presence of Officers, Junior Commissioned Officers and Jawans.

A Sainik Sammelan was held afterwards. Major General Surinder Singh, VSM spoke about the Division and its exploits right from the time of the second world war till date. He said that it was the devotion to duty and sacrifice of each soldier that had earned the Division a top position in the annals of military history. He emphasized on the endeavor of each individual to uphold this glorious history of the Division with their utmost devotion and dedication to duty. This he assured, would ensure even greater glory in the days to come.