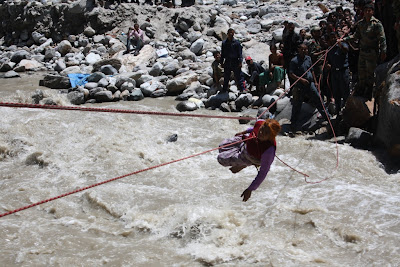 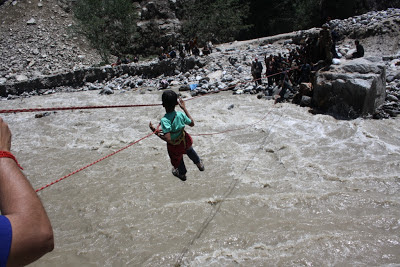 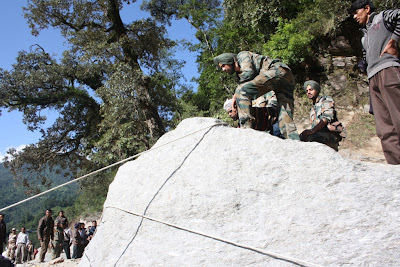 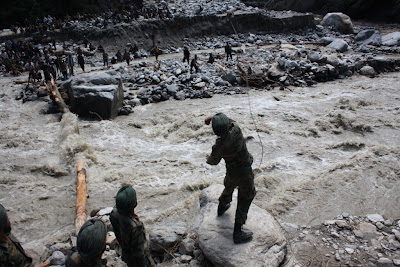 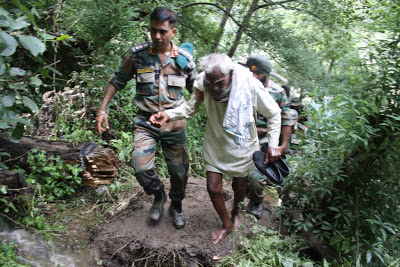 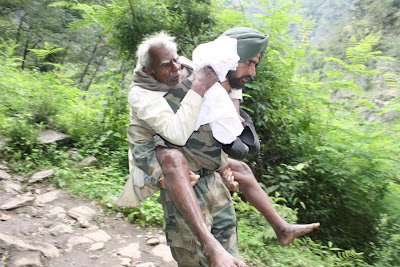 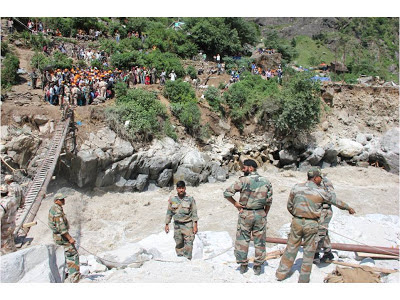 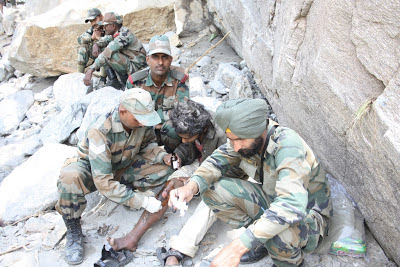 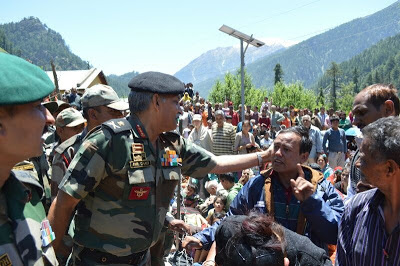 Central Command spear heading the Army’s rescue and relief operations in Uttarakhand has achieved major successes today which are truly unprecedented in the annals of history.  All the 500 people stranded in and around Gangotri have been evacuated.  Barring 25 people, Gagariya on the Hemkund axis has been evacuated.  Weather permitting the balance 25 will be evacuated at the earliest.  Army troops skilled in mountain rescue operations had established contact with more  than 1000 persons stranded in mountain folds in Jungle Chatti between Gauri Kund and Rambara on the Kedarnath axis.  Till reports last came in Army helicopters have evacuated 350 people so far and search operations are continuing.  Food and medicines have also been dropped.  Two medical teams have now established at Gauri Kund to treat patients.

Besides, a composite relief staging area has been opened at Gauri Kund providing food, water and medicines to the people.  Early in the morning today, dedicated Army teams worked tirelessly to prepare a helipad at Jungle Chatti which facilitated evacuation from one of the most dangerous and inaccessible areas of Kedar valley.  This helipad is now being improved to facilitate landing of Dhruv helicopters.  Army also constructed two helipads at Gauri Kund.

Army created history in Badrinath valley today when a heli-bridge was created at Govind Ghat to transport pilgrims across the Alaknanda River.  Helicopters did shuttle service from either banks of the river as the temporary crossing made earlier had collapsed.

Army today operationalised the foot track between Govind Ghat and Lambagar on Badrinath road.  Another column conducting road clearing operations from Badrinath to Lambagar successfully launched a foot bridge over Alaknanda this evening, thus opening the foot route from Badrinath to Govindghat. Road Govindghat to Joshimath is open to vehicular traffic.

Army achieved another milestone on Gangotri axis.  All stranded people in Gangotri have been evacuated.  Road is now open for light vehicles from Gangotri to Harsil.  Due to a series of landslides between Harsil and Uttarkashi, Army is now moving people using ‘Staging Area’ concept.  Across all landslides, people are being made to cross on foot and in between any two landslides, vehicles are being used.  Two staging areas at Sukhi and Gangnani have been established to provide food and medicines to evacuated people.
Army column reached Barkot on Yamunotri axis today.  The column would start evacuating people from Yamunotri by tomorrow.  As per the latest data, approximately 700 people are at Yamunotri.

In Tawaghat – Dharchula axis in Pithoragarh district, Army is in the process of establishing link up with approximately 1000 people in Sobala valley and medical teams and food has already been sent there today.  Army column evacuated all 45 children who were stranded on Pindari glacier in Bageshwar district.  Search operations are on to link up with 10 to 12 people stranded on Sunderdhunga glacier.

Army has so far deployed 19 medical teams in Uttarakhand with each team led by a doctor. 45 satellite phones have also been deployed in various parts of the state to enable stranded people to contact their families.  More than 2300 people used Army communication facilities to talk to their loved ones at home.

Army so far has evacuated 18500 people and deployed 10000 soldiers for rescue and relief operations.  Lt Gen Anil Chait, Army Commander, Central Command after reviewing the flood situation in UP today is returning to Uttarakhand on Sunday to direct and intensify Army’s efforts.  “Army operations will continue till the last man is brought back home”, said Lt Gen Anil Chait while addressing media persons in Lucknow today.