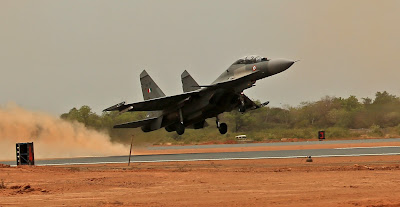 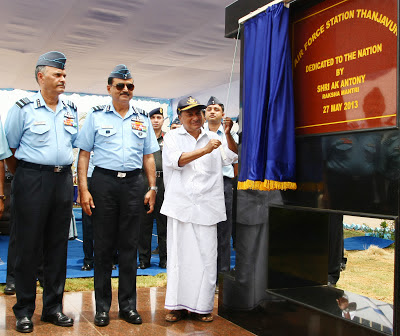 The Defence Minister Shri AK Antony today dedicated to the nation the New Air Force Station at Thanjavur at a brief function held to mark the occasion.

Speaking to reporters Shri Antony said the operationalisation of the Air Force Station, Thanjavur would strengthen the air defence capabilities of the Indian Air Force in general and the Southern Command, in particular. He said various sensitive, strategic, industrial, aerospace and economic assets are coming up in the Southern Peninsula and the Station will play a vital role in providing protection to those assets.

The event was attended among others by the COSC and the Chief of Air Staff Air Chief Marshal NAK Browne and the AOC-in-C Southern Air Command Air Marshal RK Jolly.

Shri Antony said the Station will also help protect our island territories and Sea Lines of Communication in the Indian Ocean Region(IOR). He said even though we are a peace-loving nation, we have to protect our national interests from threats such as piracy and terrorism. He said the IOR is increasingly becoming more and more active. In the emerging security scenario, the presence of Fighter Planes in Thanjavur will not only guard our interests but also give a feeling of safety to our neighbours, he said.

Thanjavur airbase is poised to become a premier airbase in Southern Air Command. The status of the airbase as the pride of Southern Air Command befits the city of Thanjavur, which was a jewel in the crown of the Chola and Pandya Kingdoms.  The airbase was first constructed in 1940 by the Royal Air Force.  During the period 1942-45, 36 Sqn, 353 Sqn and       60 Sqn of RAF operated from this airfield with Hudson, Wellington 1C, Hurricane and Thunderbolt aircraft.  These aircraft were used in various roles which included fighter operations, air transport, anti- shipping and              anti-submarine patrol.  After independence, the airfield was handed over to the Airports Authority of India and Vayudoot operations were undertaken from this base.

By the mid-eighties, a need was felt to build up the country’s  air power capabilities in the Southern peninsula to provide Air Defence protection to the high value national assets as well as the island territories.   In addition, there was a growing need felt to protect our maritime trade and the large EEZ in the coming years.  The government, therefore, decided to create Southern Air Command at Trivandrum in 1984 and also gave approval for the formation of 47 Wing at Thanjavur.  The IAF took over the airfield in March 1990.

With the modernization and induction of new technology into the IAF, it was but natural to upgrade the infrastructure at Thanjavur to utilise the sophisticated weapon systems in times of need and the works towards it started in real earnest.  This included construction of runway, parallel taxi track and other operational, maintenance and administrative infrastructure to support air operations.

The air base is now ready to undertake fighter, transport & helicopter operations and detachments of these aircraft will be planned every year. The  Air Force Station is also slated to house an array of IAF platforms in the future including Su-30 ‘Air Dominance’ Fighter Aircraft, Medium Transport Aircraft, Remotely Piloted Aircraft and a Medium Power Radar on build up of further infrastructure.

In the intervening years, this air base has been used extensively for relief operations whenever the southern peninsula was affected by natural calamities.  During the heavy floods in Tamilnadu in November 2008, the IAF helicopters operating from Thanjavur dropped 15,000 kg of relief material in Papanasam, Mulanguri and Pandalenur areas.

Earlier, on his arrival at the Thanjavur Station, Shri Antony was presented a guard of honour. He unveiled a Plaque marking the dedication of the Station to the Nation. Two SU-30 MkI aircraft took off from the Station.

Speaking on the occasion,  Air Chief Marshal Browne said, in the years ahead, the strategic importance of the Thanjavur Air Base will grow in stature. He thanked the Defence Minister for settling issues relating to the relocation of some villagers for the expansion of the Station.

Shri Antony thanked successive governments of Tamilnadu for their help and support to the activities of IAF and the MoD.
DPR