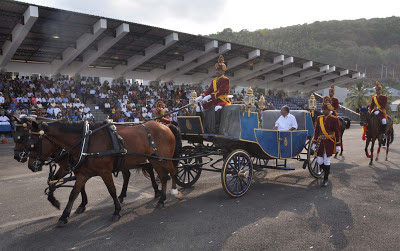 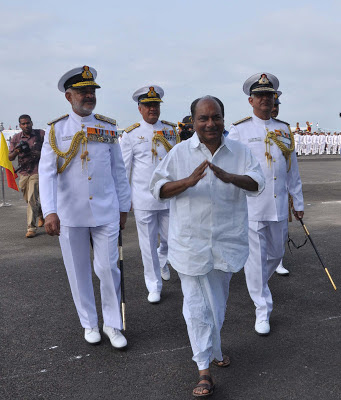 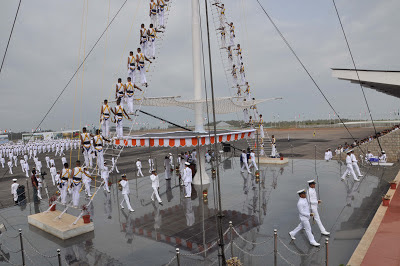 The first batch of 60 Navy Officer Cadets who joined the Indian Naval Academy (INA), Ezhimala  for its Flag Ship B Tech course graduated along with 242 other Officer Cadets of the Indian Navy and Coast Guard at an impressive Passing Out Parade held at INA today. Befitting the occasion, Shri AK Antony, the Defence Minister of India reviewed the Parade. The B Tech course was started at Indian Naval Academy, Ezhimala when it was commissioned in January 2009, by the Prime Minister of India. This followed a farsighted decision by the Navy to make Engineering degree, the basic qualification for the Officers of its Executive branch, acknowledging the pivotal role technology plays in the art of modern warfare. Hitherto only Officers of the technical branches needed to have an engineering degree.

Addressing the Parade, Shri Antony, congratulated the graduating cadets on completing the challenging B Tech curriculum along with the rigours of military training. He also noted the considerable progress INA has made in every facet of Naval training and said that the Academy could be compared with the best in the world. Shri Antony also said that more infrastructure projects are in the pipeline which would ensure the best training facilities. The Minister also advised the future Officers to treat their subordinates with dignity and character. In a separate informal interaction with the assembled journalists Shri AK Antony said that Ministry of Defence has ensured full utilization of the funds allotted to it and that strengthening of infrastructure on the borders would continue unhindered. In reply to another question he said that a formalized architecture for cyber defence in the Armed Forces is on its way

The passing-out cadets belonged to the four passing-out courses of the Spring Term 2013 of INA, - the 84th Indian Naval Academy Course(INAC) - the Flag Ship Course-, the 84th Integrated Cadet Course, the 15th Naval Orientation Extended Course  and the 16th Naval Orientation Regular Course. The ‘Presidents Gold Medal’, for the cadet adjudged first in the overall order-of-merit  of the INAC course was awarded to Eby P Henry. Chief of the Naval Staff Gold Medals’ for the cadets adjudged first in overall order-of-merit for the Naval Orientation Extended Course and the Naval Orientation Regular Course were awarded to Anshu Bhau and Arun Kuriakose, respectively. Archana Sharma was awarded the ‘Flag Officer Commanding-in-Chief Southern Naval Command Gold Medal’ for being adjudged the best women trainee of the course.

Graduating and marching shoulder to shoulder with their male counterparts were 23 women cadets from the Indian Navy and the Indian Coast Guard. Admiral DK Joshi, Chief of the Naval Staff, Vice Admiral Satish Soni, Flag Officer Commanding in Chief Southern Naval Command and a galaxy of distinguished personalities including foreign military attaches witnessed the ceremonies with proud parents of the cadets. The majestic Parade culminated with successful cadets marching past the Academy’s Saluting Dias (known as the Quarterdeck), to the traditional notes of ‘Auld Lang Syne’, the poignant farewell tune. Navy and Coast Guard Dornier aircraft flew past the venue in formation. On completion of the parade, the ceremony of ‘Shipping-of-Stripes’ was held wherein proud parents of the passing out cadets affixed the rank insignias, popularly known as ‘Stripes’ on the shoulders of their wards, symbolising their transformation from ‘cadets’ into military leaders. Earlier the Defence Minister attended the Valedictory Dinner yesterday evening along with Cadets and their parents. He also paid homage at the INA War Memorial after the Parade and inaugurated a well stocked, state of the art library aptly named Panini- after the Sanskrit grammarian of yore.

INA, Ezhimala located on the historic Malabar coast of Kerala has a sprawling campus of about 2600 acres overlooking the Arabian Sea with backwaters, mountains and sea front an ideal training ground for India’s future mariners. Currently more than 1000 cadets are being trained here with the strength slated to be increased incrementally commensurate with the needs of a growing Navy. Vice Admiral Pradeep Chauhan is the Commandant of INA.
DPR

The President arriving at a Naval Parade in a horse drawn carriage ??? when did this tradition start? This is as bizarre as the gun tossing routine in the AF academy passing out parade that we have lapped up from the Americans !