INS Vagli To Become A Heritage Museum in Chennai 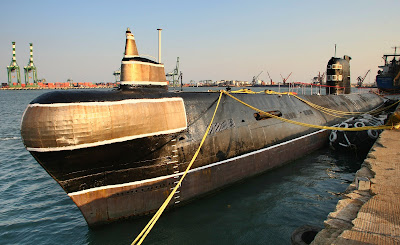 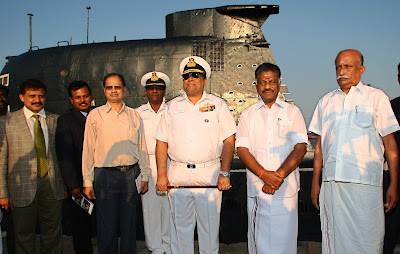 After 36 years of glorious service, INS Vagli, the oldest operational submarine of the Indian Navy that was decommissioned in Visakhapatnam in December 2010, is set to become an added tourist attraction in Mamallapuram. The submarine which was towed in by the Navy from Visakhapatnam to Chennai Port last month was handed over by Vice Admiral Anil K Chopra, Flag Officer Commanding-in-Chief, Eastern Naval Command to Thiru O Panneerselvam, Minister of Finance, Govt of Tamilnadu and Thiru P Chendur Pandian, Minister of Tourism, Govt of Tamilnadu in a function held at Chennai Port today. The submarine will be converted into a museum and set up alongwith the Heritage Museum being set up by the Govt of Tamilnadu in the shores of Mamallapuram. Commodore Amar K Mahadevan, Naval Officer-in-Charge (Tamilnadu & Puducherry), Inspector General Satya Prakash Sharma, COMCG (East), Shri Rajagopal, Principal Secretary, Home, Shri R Kannan, Principal Secretary, Tourism, Shri T Sridhar, Additional Chief Secretary, Commissioner of Revenue Administration,  Commodore S Sekhar (Retired), prominent commissioning crew of Vagli, Commodore SH Subramaniam (Retired), one of the Commanding Officers of the submarine, senior serving and retired officers from Army, Navy, Air Force and other dignitaries from civil administration attended the function.

INS Vagli, a Foxtrot class submarine type 641B was commissioned by then Lieutenant Commander Lalit Talwar on 10 August 1974 at Riga, Latvia, in the erstwhile Soviet Union. She was the first of the ‘Vela’ class of submarines to be commissioned into the Indian Navy. INS Vagli has completed 36 years of dedicated service under 23 Commanding Officers and is probably the oldest unit in the Indian Navy. The submarine in her operational life participated in almost all major tactical exercises off both the sea boards and elsewhere. The first submarine to be based at Mumbai, Vagli later shifted base port to Visakhapatnam in 1993. Despite being the oldest unit commission in the Indian Navy, Vagli continued to serve with distinction. Even in its last operational cycle she completed 137 days at sea and 1232 dived hour. That the Indian Navy was able to operate a boat of this vintage so effectively also bears testimony to the dedication and skills of generations of maintainers and operators.