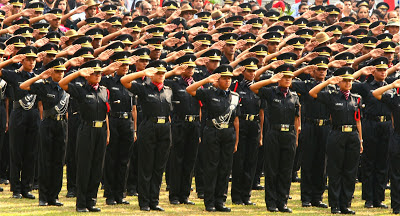 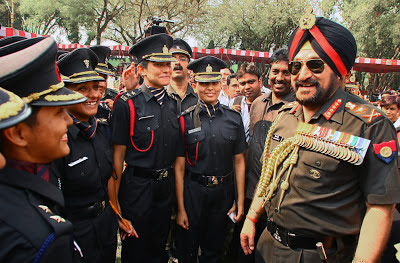 A total of 215 gentlemen and 57 lady cadets including 01 foreign gentlemen cadet passed out from the portal of Officers Training Academy (OTA) here today, before they move on to join operational regiments across the length and breadth of the country. There were a total of 07 representation from Tamil Nadu out of which 03 are from Chennai.

The parade was reviewed by General Bikram Singh, Chief of the Army Staff. In his address the general officer highlighted the glorious achievements of the Armoured Forces and especially of the Indian Army. An Officer has to be vigilant and cautious while discharging his duty irrespective of terrain, climate and personal comfort. “Being a soldier means devoting yourselves to the Nation”, says General to the passing out cadets.

General Bikram Singh awarded the Sword of Honour to Academy under Officer Chandra Mauli for his outstanding all rounder performance, Gold Medal to Battalion under Officer Seema Nayal and the Chief of Army Staff banner to the ‘Basantar Company’ for best all rounder company.

The spectacular parade was followed by a Wreath Laying Ceremony at the Martyrs Memorial and the Pipping Ceremony. The joyful eyes of the parents assembled near the pipping lawn to witness their children shouldering new responsibilities to guard the Nation were an amazing sight to watch.

The passing out parade (POP), as it is generally called, is the most significant and spectacular event in the life of the cadets, as it marks their entry into the officer cadre of the Indian Army. It also means the end of an arduous training and the beginning of the privileges and thrills of the life in uniform. The arduous and grueling preparation is only one salient of the military training imparted at the Officers Training Academy, Chennai.