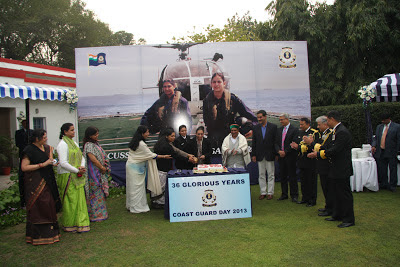 The Indian Coast Guard will be celebrating its 36th Anniversary on 01 Feb 2013. Since its inception, the service has grown into a multi-faceted and vibrant force, maintaining round the clock vigil in the Maritime Zones of India, by deploying its multi-role ships and aircraft.

Beginning with a modest inventory of two frigates seconded from the Indian Navy and five boats from the Customs Department , the service today has attained  a force level of 77 ships and 56 aircraft. During the past year, 01 Pollution Control Vessel, 06 Inshore Patrol Vessels, 04 Air Cushion Vessels and 02 Interceptor Boats have been inducted. In addition to the establishment of a Regional Headquarter (NE) and activation of 08 CG Stations, activation / commissioning of 03 CG Stations has been planned in early 2013.

The Indian Coast Guard today is on the path of rapid expansion, with a large number of state-of-the-art ships, boats and aircraft under construction at various shipyards/ Public Sector units (PSUs), and a Coast Guard Academy will be established in the near future. The Coast Guard organizational structure will have five Regional Headquarters, 12 District Headquarters, 42 Stations and 15 Air Units functioning all along the Indian coast.

An average of 20 ships and 8-10 aircraft are tasked daily, to keep the vast Exclusive Economic Zone (EEZ) and coastline under constant surveillance. The ICG has also set up the Coastal Surveillance Network (CSN), that comprise of network of coastal surveillance radars and electro optic sensors at 46 remote sites, including 36 on the main land, 06 in Lakshadweep Islands and 04 in Andaman and Nicobar Islands.

Regular community interaction programmes are being conducted by Indian Coast Guard in the fishing villages all along the coast .These programmes are aimed at sensitizing the fishing community on the prevailing security situation and to develop them to be the ‘eyes and ears for intelligence gathering. In addition, during the past year, the Indian Coast Guard conducted 20 coastal security exercises and 21 coastal security operations.

The Indian Coast Guard has been expanding and is witnessing all around development, in both capacity and capability. State-of-the-art ships and aircraft manned by competent and professional officers and men take pride in serving the nation and protecting our maritime domain. The theme of the Indian Coast Guard for the year 2013 is ‘Focused on Maritime Safety and Security’, which aptly reflects the commitment and resolve of the service, and is in tune with its motto ‘Vayam Rakshamah’ meaning ‘We Protect’.