Army Chief Talks Tough At Maiden Presser, Says Formation Commanders Have Right To Be Aggressive, Offensive & Can Retaliate If Provoked with Firing, Says LC Incident Tactical & Localised, Reply Will Be Given At Place, Time Of Our Choosing !! 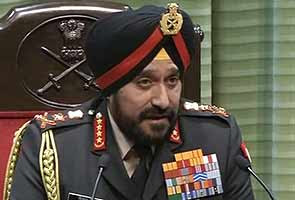 At his maiden presser ahead of Army Day, General Bikram Singh said the 8th Jan incident at line of control in Mendhar sector was localized and tactical in nature, and a befitting reply will be given at a time and place of our choosing, he said local formation commanders have the right to be aggressive and offensive and retaliate if provoked with firing. He said he was the head of the family and totally sympathises with the two slain soldiers' families, plus the families of the 91 personnel lost in action in the past one year. After Army Day is over, he'll go and meet Hemraj's family.

About getting Hemraj's head, he said the govt is working on it through appropriate channels.

Talking to pakistan has not yielded any different results apart from attacks and yapping and napping from India be it before kargil war, after kargil war, before mumbai train blasts, after mumbai train blasts, parliament attack, mumbai attacks and everyday violation of cease fire. India is the only country not acknowledging herself at war even though her soldiers get killed everyday in enemy fire. This is because none of 'Aman ki tamasha" members ever feel a bullet passing their heads but get an opportunity to wine and dine and gain importance. The IAS is an impotent force failed on every segment and since they cannot exercise their voice when Indian Military wants to strike, they then pressurise the Indian army not to act so as to hide their incapacity whilst dealing in an international arena.

In 1962 the same IAS and bureaucrats led by the Idiot Krishna MEnon, insulted the army, negated what the generals had to say, Menon even took revenge on General Maneckshaw (who went on to become Field Marshall later on) as the general never bowed down to the stupid idiotic dictats of the Menon who was the minister of defense and humilated India when China attacked

Now we have another Menon , again a bureaucrat aided with Iyer and other politiians who want to fool us that talk talk and yapping is going to solve the problems whilst Pakistan is beheading Indian soldiers and building sleeper cells all across the country.
Who is more dangerous to the Indians, the IAS and the politicians orPakistan and china..i think the former