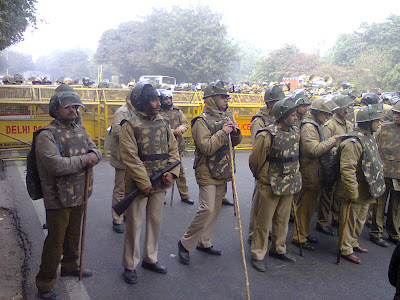 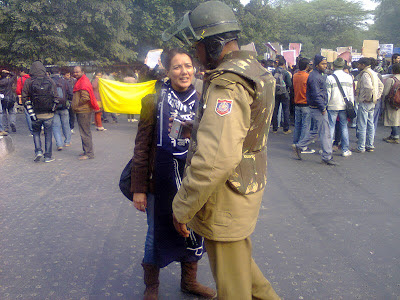 I had no plans to join any protest march in support of the Delhi gangrape victim, though I believed strongly in the cause, I was a silent, observer from outside and also supported it from my heart. But on Thursday I had just gone to take a look, when I was dragged in and got drawn into the march, which was about to begin from Nizammuddin till India Gate. I was given a banner by one of the woman protesters, who belonged to a women's NGO.

I put aside my press card and plunged into the protests, as I was a journalist later, a woman first and this was my cause also.

I found different types of people, from different walks of life, who had made different groupings inside the large group. Some were first-timers like me, but most women were veterans.

There were more men, than women, shouting slogans, singing songs and playing musical instruments. Delhi police was in full force all around us, completely kitted-up with helmets, shields and batons and later I saw atleast four police pickets set-up on Zakir Hussian Marg, like a Chakravyuh, obviously which no one could break. To ensure non-violence, there was Section 144 imposed that day, after a certain area.

We were approximately 300-400 of us, and the police force was about 800 odd, fully kitted-up , with large vans with water cannons, batons, tear gas and ofcourse Sec 144 , in place.

As I began the march on that stretch of road, shouting slogans, I realised that even as the slogans rage, the internal battles must begin within each of us.

I had a Manipuri woman beside me with brochures on her group-Gun Survivor network , which she was distributing.

All roads leading to India Gate, like Zakir Hussian Marg, Shahjahan, Kasturba Gandhi etc, had been heavily barricaded and picketed by the police.

I was specially impressed by an old lady who came on a wheel-chair to be part of the protest.

The Mumbai-based cartoonist, Aseem Trivedi, who had been arrested recently on sedition charges, too was part of this protest march on Zakir Hussain Marg.

I spoke to some women about the protest and how they got there. Students were first-timers who spoke of having universal safety for one and all, working women cited the problem in public transport and how unsafe the city had become. NGO workers said this was their job. I also saw middle-aged house-wives form the lower strata of society, along with young daughters holding placards. It appeared that this protest had given them too a platform to voice their everyday problems.

Some were fashionable young girls in designer wear, shouting very passionately. Meanwhile there was a disconnect among the various small groups in the large group, when it came to voicing what they wanted. Everyone looked a little confused when asked by TV channels as to what they wanted. I even heard some women discussing what to answer in front of cameras, arriving at a consensus that they should say something new and not repeat the previous day's comments.

Meanwhile I was very cautious about my wallet in my bag, and looked at it atleast 100 times to make sure all was ok!!

We reached a little more than half-way short-of India Gate, when we were stopped and made to sit down on the road.

Slogans and songs on musical instruments were on at full blast. Some girls even went and spoke to the police about letting them go ahead, but to no avail.

I wanted to join my colleagues on the other side, but I was stopped. I had to show my press card to get through. Finally I spoke to a DCP for his help to let us on the other side safely as we had  to return to office for work, but not before I had learnt a few things.

Respect for women was not about marches and slogans, but it started right here from us, with us.

Act even if you start small - tell off that male colleague who makes sexist jokes, and stares at your chest. Never tell your sons to stop ''crying like a girl''. Don't let your families have different yardsticks for their daughters-in-law, and different ones for their sons/sons-in-law. Don't be afraid to speak up, and to do it often.

Email ThisBlogThis!Share to TwitterShare to FacebookShare to Pinterest
Labels: controversy, war and conflict

What I hope is that this issue is not allowed to die.

the last paragraph is the problem. we blame our system and politicians for whats happening. we ourselves and our parents have to be blamed honestly. 90% of people treat their wives just like maids. only thing they dont call her a maid. No one bothers about schools teaching moral science or practicing it. at school we are taught that we should not even sit with girls and from their the discrimination starts. Something should be done to make this discrimination go away. if it goes you dont need laws to control people.

Every one blames middle east dont have freedom for girls. Girls are respected to the highest is most gulf countries. They have all the freedom in countries like Oman, UAE etc. It is not because of the law but the way people are brought up. india has to change. We all have to change for that