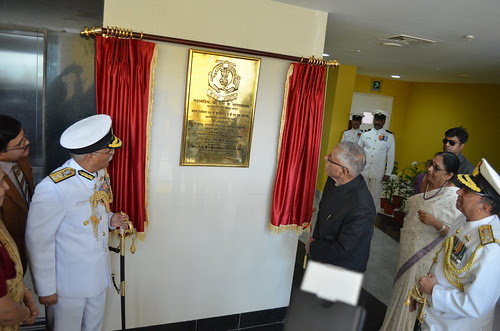 The fifth Regional Headquarters of the Coast Guard at Kolkata has been established in pursuance of the directives of the Cabinet Committee on Security. The region itself was carved out from the Coast Guard Region (East) to strengthen coastal security and augment Coast Guard operations along the northern Bay of Bengal. The Region will exercise operational and administrative control over all Coast Guard assets in West Bengal and Odisha and will have jurisdiction over 1.5 lakh sq kms of the Indian Exclusive Economic Zone, extending upto the Indo-Bangladesh International Maritime Boundary Line. The region will be further strengthened by basing additional ships and aircraft and commissioning of two CG stations one each at Frazerganj and Gopalpur and one CG Air Enclave at Bhubaneswar in near future.

In his address, His Excellency, Shri MK Narayanan the Governor of West Bengal highlighted the need for a pro-active approach by all stakeholders involved in coastal and maritime security to achieve the common goal of national security. He stated that post 26/11, numerous measures have been initiated by the Government of India for enhancing coastal and maritime security and specific responsibilities have been assigned to the Indian Navy and Coast Guard towards this. He further stated that with the setting up of Coast Guard Regional Headquarters (North-East), coordination among all stakeholders involved in Coastal Security in West Bengal and Odisha will get further streamlined and enable them to work in a synergised manner for the protection of the sea areas off the coast of West Bengal and Odisha.