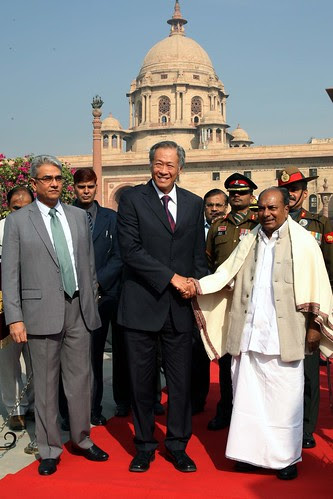 VISIT OF DEFENCE MINISTER OF SINGAPORE, a photo by Chindits on Flickr.


India and Singapore have agreed to further enhance the bilateral defence relationship in the mutual interest of both countries as it would contribute to regional peace and stability. The Defence Minister Shri AK Antony and the visiting Minister of Defence of Singapore Dr. Ng Eng Hen, after the bilateral delegation level talks here today, expressed satisfaction over the wide ranging comprehensive defence exchanges between both the countries.

Both the Ministers also agreed that the on-going interactions between the defence establishments of the two countries, including through regular joint military training and exercises, had been useful. They also agreed to continue such interactions.

They also exchanged views on the global and regional security scenario. In the context of the security situation in the Asia Pacific region, both Ministers acknowledged the role of the ASEAN Defence Ministers Meeting (ADMM) Plus framework in promoting dialogue and consensus in the region. Defence Minister reiterated India’s commitment to remain constructively engaged in activities under the ADMM Plus framework.

Both Ministers noted the commonalities in the security concerns of India and Singapore and acknowledged that there was scope for both countries to continue to work together for regional peace and stability. To this end, it was decided that there should be regular meetings at the level of both Defence Ministers to facilitate exchanges of views on important issues and common security concerns.

Prior to the meeting, the Singapore Defence Minister laid a wreath at the Amar Jawan Jyoti. He was also accorded a ceremonial Guard of Honour.