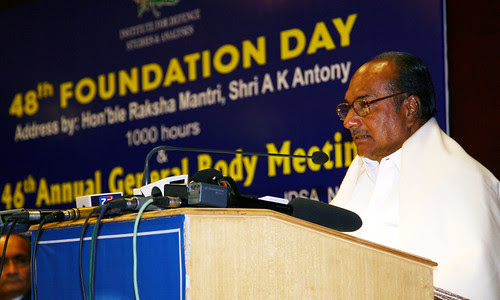 Following is his speech:

”It is a real pleasure to be amongst the distinguished members of the strategic community. At the outset, I extend my congratulations to all of you on the occasion of the 48th Foundation Day of the IDSA.Foundation Day is a time for introspection as well as planning for the future. Today, as we celebrate our achievements and successes, we must also reflect over how to strive for further excellence.Before proceeding any further, I extend my heartiest congratulations to the winners of the K Subrahmanyam Award and the President's Award. Today, we are honouring the memory of Late Shri K. Subrahmanyam, whose contribution to the establishment and development of the IDSA is well-known.

It is a pleasure to confer this year's K. Subrahmanyam Award for Excellence in research and strategic security issues on Prof. Kanti Bajpai. Over the last three decades, Prof Bajpai has through his writings and commentaries, contributed immensely to the growth of Indian strategic thinking. He has been an academic, a respected analyst and a thinker on international affairs. He has also been an outstanding teacher, having taught at several leading institutions of the world. He is widely respected by his students and peers alike. His research has touched upon key issues pertaining to Indian security. I extend my heartiest congratutations to him on being selected for this year's K. Subrahmanyam Award and hope that he will continue to enrich us with his insights in future too.

I also congratulate Shri Laxman Behera, the winner of this year's President's Award. Despite his young age, Shri Behera has through his writings, been promoting a better understanding of India and the various challenges it faces. It is a matter of great satisfaction that IDSA's work through such scholars is increasingly being recognized internationally. I once again extend my heartiest congratulations and best wishes to the award winners. '
Today, think-tanks are playing an increasingly important role the world over, in creating more awareness about the changing geopolitical environment and generating alternate policy options. They provide a platform for a candid and constructive exchange of views amongst experts. Through Track II dialogues, reports, research articles, high profile conferences and seminars, think tanks can enrich and inform poticy debate. It is a matter of satisfaction that the I DSA is performing all these functions. The conferences organized by IDSA, for instance, the Asian Security Conference and the South Asia Conference have been well-established and have been well-attended by .scholars from across the world. Its publications too have been well- received.
Over the centuries, Indian civilization has influenced other cultures and has in turn, been enriched by them. Today, India seeks to cement its place in the comity of nations. India has had a splendid record as a vibrant, functioning democracy. Its economic strength, its capable military, its positive role in maintaining global peace & security has naturally attracted the attention of the outside world. Naturally, the external world would
like to know more about our nation, what we think, what our policies are and how we propose to meet with the growing challenges on the political, economic and security front. Due to these factors, the IDSA has been sought out by interlocutors and the people in general around the world, for a better understanding of India and its place in the world. The IDSA's research agenda, as well as its national and international outreach has expanded. Young interns and visiting fellows want to spend quality time at the Institute. Such interactions have made the place all the more vibrant. .
IDSA is focusing on important policy issues. It is a matter of satisfaction that there is growing interest in the various departments of the government in IDSA's research. Today, IDSA has excellent research facilities. A particularly heartening trend is that students from various colleges and universities are benefiting from IDSA's research. This must be built upon in the days to come. All over the world, standards of volume and quality of research are going up. You must ensure that research undertaken by the Institute matches the global standards and the research output does not lag behind international standards. The Institute brings under one roof, a large number of scholars, security experts, academics, diplomats, military personnel, media persons for a variety of programmes. The Institute's academic output, which is peer-reviewed and published, has also
increased. The Institute's website registered over 5 million hits last month, showing that it is becoming a vibrant portal.

While traditional issues continue to remain in IDSA's focus, the Institute has sought to expand its research agenda by tackling new themes. In the recent past, it has brought out several publications on contemporary issues such as energy security, cyber security, space security, maritime issues, climate change, India's procurement policies and out-of-area contingency operations. It has also taken an initiative to investigate the origins of India's strategic culture in a systematic manner.
However, in doing so, there is a risk that the Institute's limited resources might be stretched too thin. Prioritization is therefore, of paramount importance. The Institute should not only be responsive to the changes that are taking place in and around India, its research output must be authentic, credible and of high quality. The Institute must also be accessible to the outsiders. The Institute must also make an effort to encourage young talent and train them in strategic thinking.Friends, I would like to acknowledge the contribution made by the IDSA's Executive Council in supporting the activities of the Institute. Under the guidance of the Executive Council, the IDSA has sought to achieve high-quality in its work, while maintaining
the standards of independent and objective research. However, there is no room for complacency. The challenges before the institute are varied in nature. Over the years, it will face more and more competition. As it spreads its wings, there will always be resource constraints. The IDSA must strive to function within the framework of its core values of integrity and honesty, professionalism, pursuit of excellence, team work, innovation and creativity.

The Institute has a rich history and tradition. It must live up to its creditable past. The IDSA has reached the premier position in the country as a result of tireless efforts of the previous directors, research scholars and supporters of the Institute. This must never be lost sight of.
Friends, India will have to build and invest judiciously in its research institutions, as strategic thinking is crucial for planning for the future. The IDSA has traditionally played a major part in promoting a culture of strategic thinking. The IDSA is not merely a research institution, it is an institution which has contributed to nation-building. This is a role it must continue to play more substantially.
Our scholars must remain alive to the emerging trends in a rapidly changing world. The Institute faces a major challenge of ensuring that it continues to deal with new subjects, new issues and new methodologies. At the same time, it must not neglect its traditional areas of core competence. For this, it is important that you do not fritter away your energy and efforts and lose sight of the focus areas and must therefore, prioritize and concentrate on core areas discriminately. The human resource available with the Institute will have to play a critical role in this regard.As President of the Institute, it has been my endeavour to ensure that the IDSA continues to develop and achieve greater heights. I would like to acknowledge the help provided by all of
you in supporting the Institute. I am confident that you will continue to provide your support in future also.
I wish the IDSA, its members and the strategic community all the best in their endeavours.”

IDSA ? whats the full form of that ?