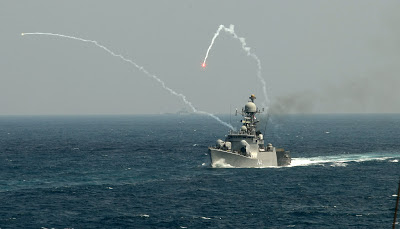 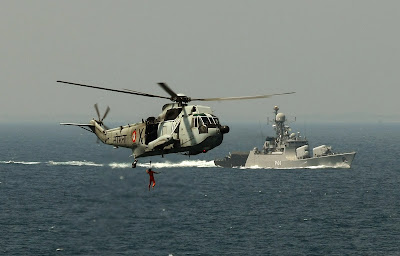 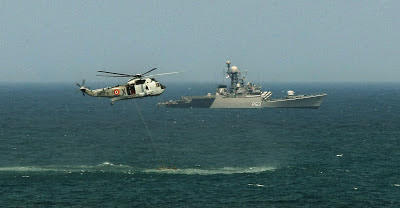 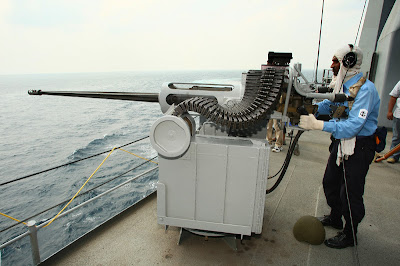 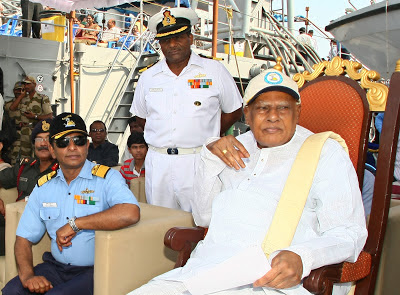 The day at sea demonstrations by the ships of eastern fleet was organised off the coast of Chennai today.  Indian Naval Ships including Landing Platform Dock (LPD) Jalashwa, Destroyers Rana and Ranvijay and the missile corvettes Kirpan, Kulish and Kirch participated in the demonstration.

A large number of exercises including demonstration of Naval ships which ward off attacks by fast moving crafts manned by terrorists and pirates, simulated missile firing demonstration, search and rescue by naval helicopters, a slithering operation undertaken by marine commandos on small crafts depicting pirate vessels and close quarter manoeuvres involving personnel and stores transfer between ships at sea are demonstrated to the guests embarked onboard for the sea sortie.

Speaking on the occasion Rear Admiral P Ajit Kumar, Flag officer in Commanding Eastern fleet said that the eastern fleet based at visakhapatnam is the sword arm of the Indian Navy and is formed with a wide array of extremely potent war fighting ships including the indigenous stealth frigates of the Shivalik class.  Jalashwa is an amphibious ship which is primarily designed to carry armed troops to distant shores.  The ship, being a versatile platform, can also be used for other secondary roles such as disaster relief and evacuation of Indians stranded in war torn areas abroad.  Rana and Ranvijay are the guided missile destroyers of Soviet origin and have served the Navy for nearly three decades and are considered one of the most powerful ships in the arsenal of the Indian Navy.  The ships are equipped with long range surface to surface missiles, anti submarine torpedoes, surface to air missiles and numerous guns to thwart all possible attacks.  The K class missile corvettes are indigenously developed ships which are armed with long range surface to surface missiles and guns, he added.

The Navy day, every year is celebrated on 4th Dec to commemorate a daring first of its kind missile attack by the OSA class missile boats on Karachi  during the 1971 Indo-Pak war.  This was for the first time post independence that the Indian Navy was drawn into war and proved its mettle bringing a hasty end to the conflict.  The attack was so fierce that the entire Karachi remained ablaze for many days after the attack thereby delivering a severe blow to Pakistans' war waging potential.