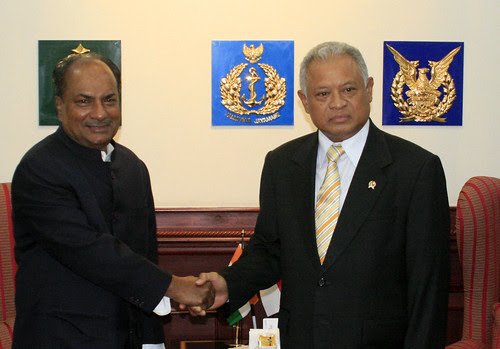 
India and Indonesia today decided to significantly enhance their defence cooperation with the Defence Minister Shri AK Antony declaring his meeting with his Indonesian counterpart Mr Purnomo Yusgiantoro as a ‘turning point’ and an ‘excellent beginning’.

This was the first Ministerial level biennial defence dialogue between the two countries which lasted nearly two hours. The two sides exchanged views on a whole range of issues relating to regional and global security, bilateral exercises involving Services, training, co-production of defence equipment and ammunitions and visits at high levels.

The defence dialogue mechanism at the highest level was agreed upon during the visit of Indonesian President SusiloBambangYudhoyono to India in January last year.
Giving an overview of India’s perspective on global and regional security, Shri Antony said the threat of terrorism perpetuated by State and non-State actors affects all of us equally. Shri Antony said some times, the acts of individual terrorists and terrorist organizations are also actively or otherwise encouraged by allowing such organizations safe refuge and other forms of support. ‘It is seen that there are countries from where terrorists are free to launch their operations against other countries. This cannot be tolerated. The world is paying a heavy price for such mindless policies. No country should allow its territory to be used for any form of terrorism, directed against any other country or its people, Shri Antony said.

Dealing at length the power rivalries in the Indian Ocean Region, Shri Antony said although these are being conducted in local theatres, the impact is felt in the wider regional arena and also, globally. He said, we have a stake in the maintenance of peace and stability in our immediate and extended neighbourhood. This includes the entire Indian Ocean region to our east and west. ‘We have a vital stake in the evolution of balance security and cooperation mechanisms through which we can build consensus and pursue dialogue. We seek to improve our partnership with all countries in the Indian Ocean Region on bilateral basis as well as through multilateral for a like IONS, IOR-ARC etc’, he said.

The two sides also exchanged views on the emerging scenario in Afghanistan and West Asia.
The two sides noted with satisfaction that Defence Cooperation constitutes one of the principal focus areas of their diversified relationship. Encouraged by the success of the first Joint Exercise on Counter Terrorism and Jungle Warfare in India earlier this year, Shri Antony proposed that the two countries should continue the joint exercises between the two armies on a mutually agreed frequency.

Similarly, the two navies are regularly conducting coordinated maritime patrols (CORPAT). He said we can examine the possibility of enhancing the engagement through conduct of joint naval exercises. He also offered to Indonesia establishment of a formal maritime domain information sharing arrangement between the two navies.

On the Air Force side, Shri Antony said a high level Indian Air Force team would send a team to finalise details of training and spares support package, once the Indonesian Air Force firms up its requirements.
Shri Antony was assisted by a high-level delegation including the Defence Secretary Shri Shashikant Sharma, Indian Ambassador to Indonesia, Shri Gurjit Singh, CISC Vice Admiral SPS Cheema, C-in-C Andaman & Nicobar Command Lt Gen NC Marwah and DG Ordnance Factory Board Shri SK Beri.
Shri Antony invited Mr Yusgiantoro to visit India for the next round of talks next year and the same was accepted.

Earlier, on his arrival at the Defence Ministry Headquarters in Jakarta, Shri Antony was accorded an Inter-Services guard of honour.