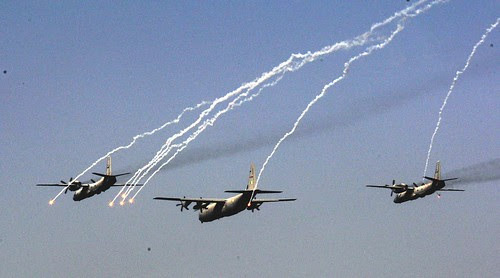 1, a photo by Chindits on Flickr.
The air display will commence with Para Motor and powered Hang Glider performance, followed by flag bearing sky divers of Akash Ganga Team dropping out of AN-32 aircraft.

The commencement of Air Force Day Parade will be marked by fly past of three Mi-17 V5 helicopters in Vic formation trooping the Air Force Ensign at a height of 40 Mtrs and speed of 80 Kmph. A Chakra formation comprising three Mi-35 attack helicopters would follow. This will be followed by a Hercules formation consisting of one C-130 J flanked by two AN- 32s followed by Spectrum formation comprising one C-130 J in the lead with two AVRO and two AN-32 aircraft in Echelon position on either side.

The fighter flypast will be led by three Jaguars in Vic formation closely followed by Vic formations of Bison (MiG-21), Baaz (MiG-29), Vajra (Mirage 2000) aircraft and SU-30 MKI aircraft. This would be followed by a Sukhoi aircraft carrying out a ‘Vertical Charlie’ manoeuvre.

Also, rolling off the runway of the Hindan airbase, would be the De Havilland Tiger Moth of the IAF’s Vintage Aircraft Flight. Flown by Group Captain A S Lamba in 1989, today it was captained by Wing Commander H Kulshreshtha, a test pilot at the Aircraft and Systems Testing Establishment.

This aircraft has made its first public appearance after 23 years. It was inducted into the pre-independence Royal Indian Air Force in 1940 as the basic trainer aircraft and 150 of these aircraft served in the Elementary Flying School at Jodhpur up until 1957 , when it was replaced by the HAL built HT-2.

Marshal of the Air Force Arjan Singh, DFC has flown this aircraft during his active service. This aircraft is an open cockpit, two seat trainer with a cruise speed of 75 miles per hour and an endurance of two and a half hours. It is powered by Gypsy Major Engine capable of generating 130 Brake horsepower and is fitted with a fixed pitch propeller.