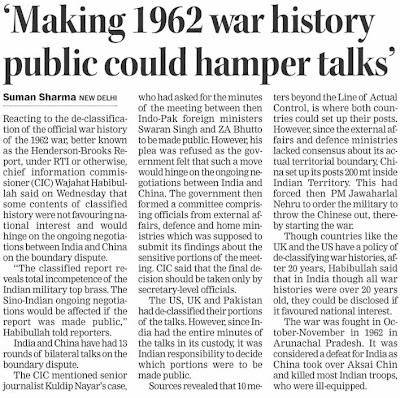 Indian Airforce (IAF) Chief Air Chief Marshal NAK Browne has said that if air-power was allowed to be used in 1962 by the then Nehru Govt, then the result of the war would've been different from what it was. Addressing the media at the annual press conference, in the run-up to the 80th IAF Day celebrations, on October 8, Browne endorsed the book written on the 1962 Sino-India conflict 'Himalayan Blunder' saying that he did not wish to add anything more to what the book already said, and thereby create confusion. The Chief also added that the 1999 Kargil conflict also ended quickly as air-power was used and IAF had participated, else the conflict would've gone on for long.

"Its air-power which concluded the Kargil conflict." The Chief also said, "IAF was not allowed in an offensive role in 1962, only a supporting role, but this time there will be no such limitation and IAF will play a leading role."

The Sino-Indian conflict of 1962 is completing 50 years this year. Fought in October-November of 1962 in Arunachal Pradesh, it is considered a defeat for India, as it caused the loss of Aksai Chin area and most of the Indian troops being killed owing to being ill-equipped and poorly clothed.

It may be noted that the 1962 Sin-Indian war which took away one third of Kashmir, gave India three of its posthumously PVC winning war heroes, a Bollywood movie,  and a life-long boundary dispute with one of its most powerful neighbours, China, however does not have any reference in the Beijing military museum or any mention in the textbooks of Chinese schools, for future generations, according to sources. Indian defence officers who have been to this museum have confirmed this.

The war, which some differ and call a border skirmish, coincided with the Cuban missile crisis, and ended in a military ceasefire, with an alteration in the Indian map. The war was fought over the soverignity issue of Aksai Chin and border regions of Arunachal Pradesh, with China's attempt to make a road link from Tibet to Xinjiang being protested by India triggering it off.

The then Prime Minister Jawaharlal Nehru is said to have had a big role in triggering the war, with the guidance of the then Defence Minister V K Krishna Menon. Sources have revealed that 10 meters beyond the Line of Actual Control, is till where both countries could set up their posts, but since MEA and MoD lacked consensus about its actual territorial boundary, it made China set up its posts 200 meters inside India territory, forcing Prime Minister Nehru to order the military to throw the Chinese out, thereby starting the war.

The IAF's Allahabad-based Central Air Command was raised the same year. Post Chinese aggression of 1962, further requirement of change was felt and the area of responsibility of this Operational Group was bifurcated in two separate commands.  The Central Air Command (CAC) was formed on June 10, 1963 to keep vigil along the Indo-Nepal at Rani Kutir, Kolkata.  But keeping in view the area of responsibility of CAC, the location of Kolkata was found too skewed towards East.  Therefore, in February 1996, headquarter CAC was shifted to Bamrauli, Allahabad, which was equidistant from the units in East and West and sufficiently in-depth from international borders.

There has been a lot of noise about de-classifying the 1962 war official history, better known as the Henderson-Brooks Report, under RTI or otherwise, but without any luck. Former Chief Information Commissioner (CIC) Wajahat Habibullah had said that some contents of the classified history were not in the national interest and would hinge on the ongoing negotiations between India and China on the boundary dispute, adding that the classified Report reveals total incompetence of the Indian military top brass. Though countries like UK and the US have a policy of de-classifying war histories, after a period of 20 years, the CIC said that in India though all war histories were more than 20 years old, but could not be disclosed because they needed to be first examined if they would be in national interest or not.