Financial Rules And Regulations Can Not Be By-Passed For Speedier Decision Making : Antony 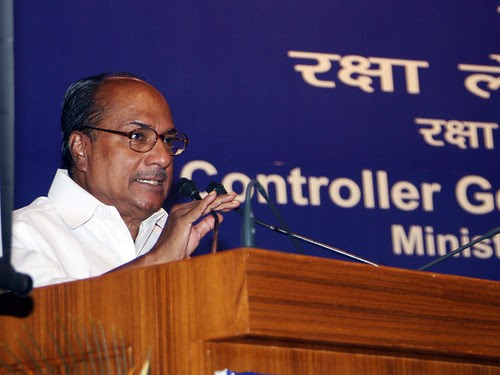 265th DEFENCE ACCOUNTS DAY, a photo by Chindits on Flickr.
The Defence Minister today called upon the financial managers of his ministry not to bypass ‘laid down rules and procedures’ on the ruse of speedier decision making. Speaking at a function organized to commemorate the Defence Accounts Department Day here Shri AK Antony said in a democracy like ours we owe an explanation to the people that the public money is utilized with propriety for the intended purpose.
“The task of utilizing the funds allotted optimally and with all the honesty, transparency and fairness has to be a collective endeavour. However, effective resource management requires speedier decision making by authorities vested with financial powers. At the same time, speedier decision making must not lead to bypassing of laid down rules and procedures. The principles and procedures governing such powers are strictly adhered to, particularly in a democracy like ours, where an elaborate system of checks and balances exists. We are all responsible to the Parliament and in turn, to the citizen of this country to ensure that public money is utilized with propriety for the intended purpose”, he added.

Shri Antony said to ensure faster decision making, enhanced powers have been delegated to the Services Headquarters, as well as to the field formations, along with provision of Integrated Financial Advisers at various levels. “We have also introduced a collegiate system of decision making as against the earlier system of considering a decision on expenditure by circulating files to various stakeholders involved in making procurement and spending decisions in the MoD, Service Headquarters and in the lower formations”, he said. The successful formation of the system demands a positive role from the finance member in getting the best value for money. During this process, competent financial authorities and other budget holders need to be supported with a Management Information System (MIS) on budgetary and expenditure monitoring in real time.

The Defence Minister also launched two IT projects developed in-house by the Department, namely ‘Pension Sanction Project’ and ‘Project SUGAM’. On this occasion Raksha Mantri awards for excellence were also presented by Shri Antony to selected employees for their outstanding contribution during 2011-12.

frame as many rules as possible sir to tie down defence R&D Engineers. Just to procure a simple item, truck loads of paper work is being done resulting in loss of precious time. single tender issues,re-tendering and re-tendering os the order of the day. With all these rules if corruption is stopped we will be the happiest ppl. Foot-in-the mouth syndrome is afflicting Indian defense R&D. look at Russia, what it is doing to Gorshakov....Are we able to confront them...No...we are dependent on them...Govt owned Defense R&D industries DRDO,DPSUs will get crippled. please ensure transparency to the auditors and need not be to the general public...punish the Guilty if they are caught....but give flexibility to defense R&D institutions.