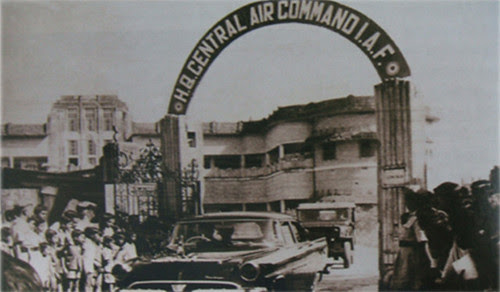 Photo_1, a photo by Chindits on Flickr.
Headquarters of Central Air Command at Ranikutir, Calcutta in 1963.

The command is completing 50 years of its formation. One can look back on these years with pride and range of achievements. In a major expansion process, the command and control structure of the Indian Air Force was reorganised during 1950’s. The No. 1 Operational Group of 1947 at Calcutta was revived in 1958 and was given the responsibility of organising and supervising the aerial operations of the IAF in the Eastern as well as the Central sector of the country. Post Chinese aggression of 1962, further requirement of change was felt and the area of responsibility of this Operational Group was bifurcated in two separate commands. The Central Air Command (CAC) was formed on 10 June 1963 to keep vigil along the Indo-Nepal at Rani Kutir, Kolkata. But keeping in view the area of responsibility of CAC, the location of Kolkata was found too skewed towards East. Therefore, in February 1996, HQ CAC was shifted to Bamrauli, Allahabad, which was equidistant from the units in East and West and sufficiently in-depth from international borders. Initially the CAC controlled air operations in all of Central India, from Delhi to Bengal. However, with the establishment of the Southern Air Command and further reorganisation, it’s size was reduced. Presently, the area covered by CAC ranges from the snow peaked mountains in the North to the Gangetic planes and centre highlands. Its area of responsibility occupies the largest landmass spanning over the states of Uttar Pradesh, Madhya Pradesh, Bihar, Maharashtra, Uttrakhand and Jharkhand. Various stations of the Central Air Command are located at Agra, Bareilly, Gorakhpur, Gwalior and Bamraulli. The units are also located at Bihta, Darbhanga, Bakshi-ka-Talab, Nagpur, Nainital, Memaura and Varanasi.

The Central Air Command with its motto of ‘Damniyah Atmashatravah’ (Vanquish The Enemy) has an enviable and exemplary record during war and peace time services to the nation. The command has seen squadrons of earlier generation like Spitfire, Liberator, Canberras and the Gnats to the famous Mirage 2000, the lethal Su-30MKI, the uncompromising Jaguar and high performance AWACS. The squadrons have brought glory to the nation and to the Indian Air Force.

During the 1965 war with Pakistan, the Central Air Command was still headquartered at Kolkata under the command of AOC-in-C, AVM Shivdev Singh. Its Area of operation included bases in West Bengal, Bihar and most of Uttar Pradesh. All of the IAFs Canberra Squadrons were at various bases under the CAC. During the war, a total of 163 bombing and 33 close air support sorties were carried out by Canberras against PAF in the western sector, raiding the airbases at Sargodha, Peshawar, Multan, Chaklala and Mauripur. Sqn Ldr Charanjit Singh and Flt Lt Mangat Singh of No. 5 Sqn made the furthest penetration on the night of 13-14 September 1965, when they carried out a ‘brilliant raid’ on a major air base at Peshawar. Three Mahavir Chakras were awarded to the members of Canberra Squadrons.

The decisive victory of the Indian Forces in the 1971 war against Pakistan and the liberation of Bangladesh is a proud chapter in the history of CAC too. At the time of this war, 5 Canberra bomber Squadrons were grouped under the CAC at Agra, Puna and Gorakhpur. Transport Squadrons were largely based at airfields in the Central Air Command. Even those with other commands, operated from the airfields at CAC for the duration of this war. At 1747 hrs on 3rd December 1971, PAF launched simultaneous attacks on a number of forward bases of the IAF. The first Canberras spearheaded IAFs swift retaliation before midnight on 3rd December. In a major attack, seven Canberras of No. 35 Sqn struck the storage area at Drigh road and scored direct hits on the oil storage tanks at Karachi, destroying about 60 percent of Pakistan’s oil reserves at Karachi. On the eastern front, the fleet of transport aircraft consisting of AN-12, Dakotas, Packets, with CAC, were used for paradrop.

Maldives is a small island nation in the Indian Ocean off the west coast of India. On 3rd November 1988, it came under the sudden attack by seaborne raiders who struck at selected targets with machine guns, rockets and grenades. The Government of India’s decision to help the incumbent President with military help, led to ‘Operation Cactus’ by the IAF. The battalions of Indian Army’s 50th Parachute regiment were airlifted to Maldives in two II-76s of the 44 Sqn based at Agra. The aircraft flew for over 2000 kms nonstop and landed at the Hulule airport on a dark unlit runway without any airfield aids. The 44 Sqn then maintained an airbridge between Agra and Hulule flying 5 more sorties. By 0230hrs, 4th November 1988, the Indian forces had completed their mission and President of Maldives was safely escorted back. CAC squadrons also flew 31 sorties with AN-32s and AN-12s for other support activities and more troops. A commendable feat indeed!

Operation “Safed Sagar” or the Kargil war in 1999, emphatically established the superiority of the IAF, in terms of capability, mental and professional edge over the Pakistan Air Force. The Mirage 2000, with their home base at Gwalior, were at the forefront of the air defence and ground attack. The use of the very precise Laser guided Bombs (LGBs) delivered by the Mirage-2000 in Kargil, Tiger Hill, Dras and other targets with lethal accuracy changed the complexion of war and future operations. Several personnel of CAC were decorated following this war.

In today’s multi-polar world, it is imperative to keep abreast of the developments in other countries. It is essential for any fighting force to have synergy with Forces of other countries, in terms of training, operational procedures, practice with other aircrafts, combat tactics, technology skills, discipline and mental agility. Such interactions also benchmark the skills of our pilots against international standards and lead to both, new learning’s and enhanced self confidence. CAC has been involved in friendly exercises with other countries over the years. In fact the first ever exercise of the Indian Air Force codenamed “Garud”, with a foreign air force took place when the Mirage 2000s of the French Air Force arrived in Gwalior in 2003 and participated in an 8 day exercise with Mirage, Jaguars, MiGs-23, MiG-27s and Mig-21 Bisons. Subsequently, a number of such joint exercises have been conducted at Gwalior and Agra with the US Air Force, UK RAF, the Singapore Air Force and Air Force of South Africa. In 2003, Gp Capt SRK Nair of the 44 Sqn, while taking part in a multilateral exercise in Alaska titled Cooperative Cope Thunder 03, successfully navigated the North Pole in his IL-76.

The CAC is well prepared to handle any natural disaster situations and provide active aid to the civil administration. The Central Air Command units have always reached out to people during any calamity such as floods, earthquakes, Tsunami and cyclones. Its helicopter units carried out flood relief operations in 1989 in Bihar, airlifting 688 tons of relief material and evacuating 522 people. In 1998, about 380 people were killed in Malpa village of Pithoragarh in one of the worst landslides in India. Helicopters from Air Force Station, Bareilly were immediately pressed into service for rescue operations. The Transport squadrons of CAC provided help towards relief measures in Odisha, in the aftermath of the cyclone in 1999. Air Force Station Gorakhpur and Bihta are known for their preparedness in helping the civil authorities during flood situations every year. Air Force Station Nagpur has transported material to Myanmar after the cyclone “Nirgis” in May 2008 and to Shinchuan province of China in May-June 2008 after it was devastated by an earthquake.

Given the proud legacy and history of the CAC, it is only appropriate that we acknowledge and honour our brave air warriors, by celebrating the Golden Jubilee of its formation.

Mrs Chauhan interacted with the voluntary donors and boosted their morale. Air Marshal Chauhan also appreciated the spirit of social commitment shown by the air warriors and their families by donating blood to save lives. A total of sixty four personnel from Air Force and Air Formation Signal regiment donated blood while many have registered for future donations. A team of doctor and para-medical staff from AMA Blood Bank Allahabad collected the blood for the needy patients.