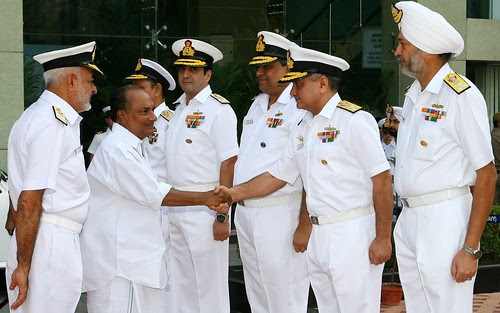 NAVAL COMMANDERS' CONFERENCE - 2012, a photo by Chindits on Flickr.
Defence Minister Shri AK Antony has underlined the key role of Indian Navy in our engagements with countries of Indian Ocean Region. Addressing the biannual Naval Commanders' Conference here today, Shri Antony said our strategic location and the professional capability of our Navy places a responsibility on us to play a more mature and stabilizing role in the region.

He said, “Our Government is pursuing a string of proactive engagements with countries in the Indian Ocean Region to ensure peace and stability in the region, which is also related to our economic and wider security interests”. In this context, he assured Indian Navy’s full support to all maritime neighbours of its unstinted support for their security and economic prosperity.

Highlighting the fragile security environment in the region, he said, “our own security interests require the Indian Navy to respond to all challenges in quick time”. He expressed his satisfaction over the Indian Navy’s brisk operational tempo over the last six months.

“Maintaining high levels of vigilance and security 24x7, collecting and analyzing information, material and physical security and maintaining the high morale of the personnel both at professional and personal levels, needs to remain a constant focus of our Armed Forces”, he added.

“Indian Navy’s overseas deployment in the South China Sea, East China Sea, the Western Pacific Ocean, Red Sea and the Meditarrean Sea carrying out exercises with the navies of these regions not only shows our capabilities but will also go a long way in reassuring the Indian diaspora in these countries”, the minister added.

Dwelling upon various measures to enhance coastal security, he said that the setting up of Sagar Prahari Bal, establishment of Joint Operation Centers, induction of 15 First Interceptor Crafts and various other coastal security initiatives will definitely strengthen the coastal security network.

“The recent installation of Coastal Radar Network Chains in Gujarat and Maharashtra and establishment of the National Command, Control, Communication and Intelligence network (NC3I) would establish a real-time maritime domain awareness link between Operations Rooms of the Navy and the Coast Guard, both at the field and apex levels” he observed.

Emphasizing on the urgent need to reduce the long construction periods of warships, Shri Antony opined the adoption of 'modular construction' and 'integrated construction' methods to speed up the Ship construction activities in a time bound manner.

The conference was attended by the Chief of Naval Staff Admiral DK Joshi, Defence Secretary Shri Shashikant Sharma and Senior Commanders and Flag Officers of the Indian Navy.