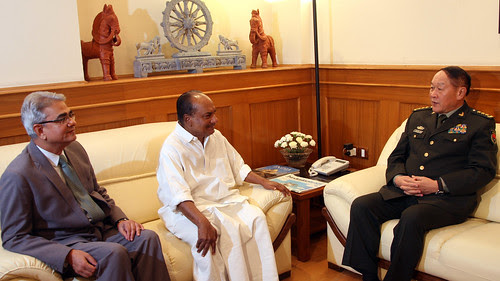 VISIT OF MINISTER OF NATIONAL DEFENCE OF CHINA, a photo by Chindits on Flickr.
The state councillor and minister of national defence of China General Liang Guanglie, who is on a four-day visit to india, called on the defence minister A K Antony at south block in new delhi on tuesday, september 04, 2012. Also seen in the picture is defence secretary Shashikant Sharma.

Indo- China Military ties to resume with China denying Arunachal Pradesh belongs to India.
Persons indigenous to Arunachal Pradesh will be termed as Chinese and thus Chinese will not require them to have a visa whilst visiting China. China will have no qualms to insult the services of Armed forces personnel belonging to Arunachal Pradesh towards India and so will India not have any qualms of cancelling trips of those delegates from India who belong to A.P. The supreme commander of Indians armed forces will not say anything when an Armed forces personnel belonging to A.P will be termed chinese, the P.M, the parliament nor any of the IAS will do nothing to maintain the respect of services and moral duty of not belittling their citizens , India's state and its people and will buckle to Chinese pressure and at most will try and sweep the problem under the carpet.

A country that cannot respect its own citizens, that does not have an iota of pride in itself, a country whose Supreme commander of her armed forces has zero experience of his/her job, will thus see such gestures at the cost of her sovernity as a success!

Ofcourse if India had stood her ground, if India;s supreme commander would stand up for his soldiers, if India made it clear that in any further propositions, chine will ahve to acknowledge the truth...that A.P belongs to India, would China then go ahead with the drama of resuming military ties! I doubt it after all India is the only country that does not respect its own sovernty and position