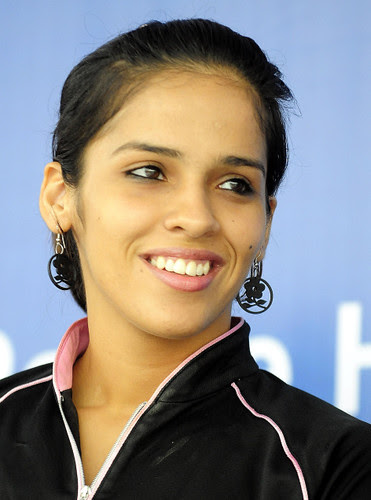 Saina Nehwal, a photo by Chindits on Flickr.
IAF Academy Dundigal, Hyderabad to host shuttler Saina Nehwal tomorrow, likely to get a sortie in a Kiran


Ms Saina Nehwal, the Olympic medal winner will be the guest of honour at Air Force Academy to witness the Autumn Term Inter Squadron Sports Meet to be held on 28 September 2012. The badminton icon, Saina will be arriving at Air Force Academy, Dundigal, Hyderabad by 1500 hrs. She will be taken to visit the Flying Faculty where she will be familiarised with the nuances of flying and will also fly the Trainer Jet Kiran. She will also visit Air Traffic Control Tower and Aero Medical Training Centre Simulator.

She will witness the closing ceremony of Inter Squadron Sports Championship which will be presided over by Commandant Air Force Academy Air Marshal PR Sharma, AVSM. She will thereafter interact with Officers and families of Air Force Academy.