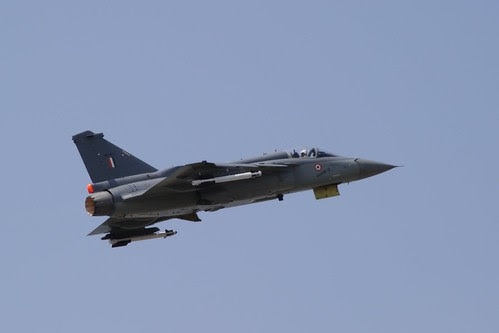 LSP-4, a photo by Chindits on Flickr.
Only been hearing about the E F414 that will power the LCA Tejas Mk-II, never heard anything about the radar, but at the recently concluded International Conference on Energising Aerospace Industry, got to know that the AESA will be on the Mk-II, indigenously built, making the Mk-II a full-fledged multirole fighter, besides other stuff like new avionics and airframe.

Right now under design and conception stage, the radar will have some help from outside, but largely home-built.

Indigenous content on the Mk-II will be 75 per cent. First flightof Mk-II expected in 2013 and induction into the IAF approximately by 2015.

good!now we are on the right track as envisaged in 1983 ASR's/NSQR's for the IAF /IN.WE need a light fighter in our inventory,built at home, with F16 capabilities in all versions.

it does not matter if it will have an indigenous AESA radar, because the radar will forever remain in the developmental stage...... just like every other component of the aircraft (except those imported from other countried).... This is off theoretical significance only

First flight of LCA Mk2 expected to be in 1213. Good news but have they started on the airframe and all the components that into it. The AESA radar can come later. ADA,DRDO and HAL have promised induction of the aircraft into the IAF even a few years ago but nothing has come of it. So it is better to take this piece of news with a pinch of salt.

Anyway, good luck to the LCA team. Hopefully LCA Mk2 will turn out to be the envy of our enemies!

I doubt LCA MK-II first test flight will be before end of 2013.
I don't think production version of LCA MK-II will join IAF before 2017. By that time it would be outdated even if it has great avionics, it limited range will be its biggest short coming. IAf will not buy more than say 40 LCA MK-II aircrafts.

Further delays on LCA project is easily predictable. In the past 29years, HAL has set and missed all milestones for LCA. There was not one single thing which was not delayed. However, no one ever got punished. India does not hold any one accoutable for this shameful failure.

What you can expect if HAL operates like this on a daily basis.

Will be delayed by several more years. Hats Off DRDO

There is NO chance that there will be an indigenous AESA radar on the LCA. It's a fool's dream.

It is well known that ELTa, Selex and Thales are vying for the supply of LCA Mk II AESA radar. India does not have this technology and is in no position ti develop it within the time frame envisaged for the LCA Mk II

Good one more excuse for delay. I am just fed up. And to add to injury the DRDO comes up with dream projects like Aura...yaar pehle LCA to khatam karo..then work on AMCA.

There is no point in comparing it with jf 17.IAF has 280 su30mki on order and those will be upgraded to super sukhoi standards pretty soon.also it has 189 rafale on order these two are enough to handle entire paf which will have 250 jf 17.tejas is mostly a technology demonstrator. with all the technology transfer from rafale and fgfa programmes drdo will come out with a very potent amca

Also jf17 is already an outdated product which does not have either composits in its airframe,no aesa radar,no digital fly by wire,no glass cockpit and has a russian engine.it is more comparable to the soviet vintage era mig 21's which iaf is phasing out