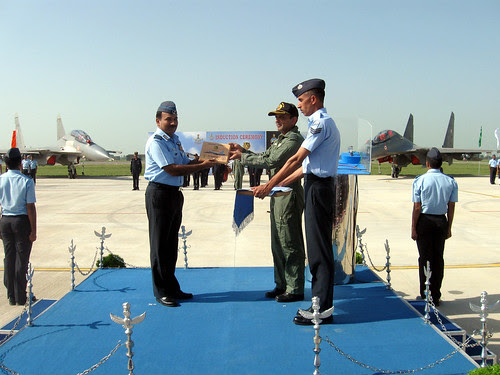 While the first batch of SU-30 MKI was inducted into IAF in Sep 2002, the 220 Squadron at Halwara known as ‘Desert Tigers’, which flew the MiG-23 aircraft till 2005 is now resurrected with the latest SU-30 MKI Squadron in Western Air Command. The SU-30 MKI is a frontline all-weather air-dominance fighter with multi-role capability, which can undertake varied air combat and ground attack missions. Air Force Station Halwara is one of the oldest frontline Airbases of the IAF. The base has grown by leaps and bounds since its inception as a forward airfield in 1942. Halwara, due to its strategic location was actively involved in both 1965 and 1971 Indo-Pak wars. Halwara has been home to Spitfires in early 1950s to being the hub of Mig-23 operations till 2009. It was later chosen to base the first SU-30 MKI Squadron in the Western Air Command in 2011.

The ‘Desert Tigers’ were formed as an offensive fighter Squadron on 09 Feb 1963. The Squadron was initially names as ‘Fighting Tigers’ and flew the first jet aircraft of the IAF, the Vampire. The squadron has changed many bases during its forty years long journey and has taken part in 1965, 1971 and Kargil Operations. While the Squadron flew Vampires during 1965 war, it flew HF-24 Marut in 1971 war from Jodhpur where the Squadron was rechristened as’ Desert Tigers’, the name it is known by till date. The Squadron later went on to fly Mig-23 BN, the supersonic strike fighter till 2009. Having been inactive for two years the ‘Desert Tigers’ were resurrected with state of the art air-dominance fighter SU-30 MKI in Sep 2011. The Squadron has a glorious past and it looks forward to bright future as it readies to spread its wings across the Indian landscape.

Air Force Station Halwara witnessed a well coordinated ceremony on this occasion. Guests from Western Air Command graced the event. The chief Guest was received by Air Officer Commanding Air Force Station Halwara, Air Commodore RGK Kapoor VM. An impressive parade contingent presented a general salute to the AOC-in-C. Later the Commanding Officer of the Squadron, Wing Commander Sharad Aneja took permission from the Air marshal to get airborne in a SU-30 MKI aircraft. The ceremony included an impressive flypast by the SU-30 s of 220 Squadron. The pilots of the Squadron executed the characteristic ‘Trishul’ formation in a spectacular manner signifying their formal induction into the premier Air Command of the IAF. The Air Force personnel and their families witnessed the momentous occasion at Air Force Station Halwara.

Air Marshal Arup Raha AVSM VM in his address congratulated the air warriors of Halwara air base for successful induction fo SU-30 MKI. He appreciated the tireless efforts put in by all personnel in operationalising the Squadron within a very short period. The Squadron has enhanced the operational capability of Western Air Command in a substantial manner. The Air Marshal and his wife interacted with the officers and their spouses during social evening organised at the Officers’ Mess.

I was in Halwara Air Force Station in 1971 Indo-Pak war. This post has brought me all the views of 1971.